[Martin Schram] A give-and-take with Gorbachev 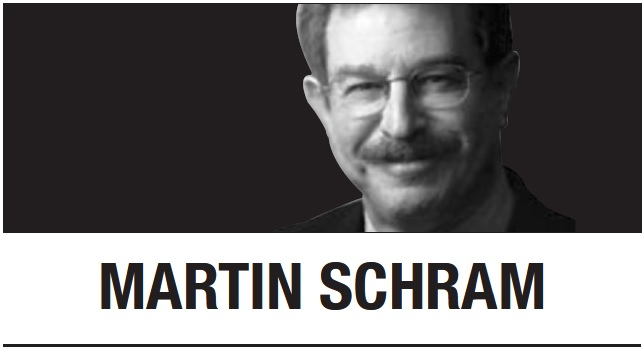 When Mikhail Gorbachev walked into the room for our interview in Moscow, he brought with him the impressive aura of a man who was still a sitting president, a confident leader who was prepared to devote just a bit of his busy schedule to yet another ho-hum exercise of message deliverance, with yet another Western journalist. This one with a camera crew.

I had hoped for something more journalistically promising -- a somewhat spontaneous (and more productive) give-and-take. After all, it had been 11 years since his Soviet Union collapsed around him.

So, as he entered the conference room of his Gorbachev Foundation, I decided we needed a change of pace. I walked up, shook his hand and said it’s nice to be back in Moscow again. My first visit, I said, was way back in 1972 when as Newsday’s Washington correspondent, I flew there with President Richard Nixon to cover the first-ever superpower strategic arms limitation summit with Leonid Brezhnev. And I added something like this:

“Well, I looked all around that big summit theater where Nixon and Brezhnev signed the deal -- but I didn’t see you anywhere! Where were you?”

Gorbachev burst out laughing. He said something about being nobody important back then. Our interview was going to be just fine.

That was September 2002, just a year after 9/11. I was interviewing Gorbachev as the managing editor of a combination project that would be both PBS television documentary series and the companion book published by Basic Books. Both were titled “Avoiding Armageddon: Our Future. Our Choice.” The massive undertaking was underwritten by Ted Turner with his Nuclear Threat Initiative to spark a global determination to safeguard the world’s often poorly secured nuclear, chemical and biological weapons and materials around the world before they fall into the hands of terrorists who want them for just one purpose: To use them. Against us.

Gorbachev, who died last week at age 91, was powerfully committed to this cause. In our interview, he said he wanted to tell the world’s leaders they must lead their citizens to feel the urgency of preventing terrorists from obtaining weapons of mass destruction. As the cameraman changed to a fresh tape, I opted for yet another unconventional change of pace.

And that’s when Gorbachev did to me what I had begun our session by doing to him. He said to me something like: I’m thinking, who is this journalist who comes here from Washington and tells me I’ve got it backwards? (Uh-oh.) But I noticed a sparkle in his eyes and a semi-smile on his lips that didn’t match his words.

“Actually,” he said, “I felt very good listening to your question, formulating this idea. ... Without dialogue between society and political leaders, without a more direct and real participation of the people in addressing those problems, we will never find a way out.

“Perhaps it’s because politicians are not sure that they can solve real problems, that they are building more and more weapons. And we see that weapons building frenzy, not only in big countries, but even in smaller countries. ... If more and more countries have nuclear weapons, perhaps biological weapons and chemical weapons … we will not have a world. We’ll have a mad house.”

Epilogue: What I didn’t mention to Gorbachev that day was that I’d actually spent a lot of time talking with intelligence and diplomatic sources, just trying to see the world as he was seeing it. Occasionally, during his Soviet presidency, things may have been seen more clearly from half a world away. At least to some eyes.

On New Year’s Eve 1988, as a panelist on CNN’s year-end show, “Closing Arguments,” we indulged in that always questionable ritual of New Year’s predictions. “The Berlin Wall will come down in 1989,” I said. “Write it down. It will happen.” Also predictably, my panelist pals, Bob Novak, Roland Evans and Pat Buchanan, of course howled and guffawed at such folly. In November, 1989, of course, it happened.

And when it happened, an angry crowd gathered outside the KGB’s headquarters in Dresden, East Germany. Inside, there was just one frightened young KGB officer -- unable to get any guidance from Moscow. He decided to stop burning documents in the furnace long enough to go outside and con the mob. He told them there were Russian troops inside that were about to come out with guns blazing, so they’d better go home. The bluff worked. The crowd dispersed.

Martin Schram, an op-ed columnist for Tribune News Service, is a veteran Washington journalist, author and TV documentary executive. Readers may email him at martin.schram@gmail.com. -- Ed.