Reentry a tricky decision that would let down its automotive clients, especially Hyundai Motor

Samsung has seen success in almost every sector it set sights on, but making and selling its own brand cars has remained a rare failure for the nation’s largest conglomerate.

Despite repeated denials by the top brass, speculation has resurfaced about Samsung’s car business, especially at times of automotive breakthroughs. More recently, fueling the speculation is the booming market for electric vehicles.

Global carmakers are rushing to ditch combustion engines for its new car launches. Tech companies like Apple, Google and Sony are also jumping onto the bandwagon in hopes of becoming first movers in future mobility from EVs to connected driving to ultimately autonomous driving.

Samsung is no exception. Over the past decades, Samsung companies like Samsung Electronics, Samsung SDI and Samsung Electro-Mechanics have greatly expanded their presence in the ever-evolving automotive industry, supplying key parts to a slew of carmakers, including Tesla, the world’s largest EV maker.

According to news reports, they have also recently launched a task force to bolster its readiness for the fast-growing EV market.

“As the electric car market grows up, electronic companies would not end up playing the role of a component supplier,” said Kim Pil-soo, an automotive engineering professor at Daelim University.

“Instead, they would be able to maximize profits by jumping into the automotive manufacturing industry, as long as they are ready to relish the opportunity.”

The automotive industry used to be a market where barriers to entry were higher than others due to strict technological requirements for driving performance and safety. But with EVs cementing its place in the industry, the hurdles have continued to be lowered, opening the door wider to tech firms.

Given batteries can represent up to 50 percent of the production cost of EVs, Samsung has already secured a competitive edge over rivals through its battery-making unit Samsung SDI.

The upcoming Apple Car, which is scheduled to make a debut in 2025, could speed up its Korean archrival’s new car launch, Kim added.

“Once Apple Car begins to roam the streets, that will be when electronic giants begin to clash with each other with cars, not smartphones,” he said.

Marketability, profitability and safety would be the three key considerations, he said.

“The time when cars are recognized as electronic gadgets would be the timing for Samsung to produce cars,” he said. “Profitability is also key because many of its clients would replace suppliers if Samsung starts producing its own cars. Samsung has to make huge investments as it is losing revenue sources.”

“Autonomous driving is expected to greatly improve driving safety. But it remains to be seen whether the mass-market adoption of autonomous driving will be possible when urbanization is getting more severe in major cities.”

Experts say the time may be ripe for Samsung to consider making cars again but they also agree that it remains a tricky strategic decision that only Lee Jae-yong, the de facto leader of Samsung Group, can make.

Even though Samsung has the technological capabilities to make almost all the necessary car parts, it would be impossible for it to do it from scratch alone in order to keep pace with the breathtaking speed of industrial shifts. That’s why many tech companies and carmakers are teaming up to produce their own EVs for better efficiency and higher profitability.

The issue is that unlike the US, Japan and even China where there are several carmakers competing for more market share, the South Korean market is largely dominated by Hyundai Motor Group, the world’s fourth-largest carmaker.

“If Samsung decides to make cars at home, it would be like declaring a war against Hyundai at least at home,” said an industry official on condition of anonymity, adding that both companies may feel little impetus to join hands considering their chaebol rivalry and pursuit of global expansion. 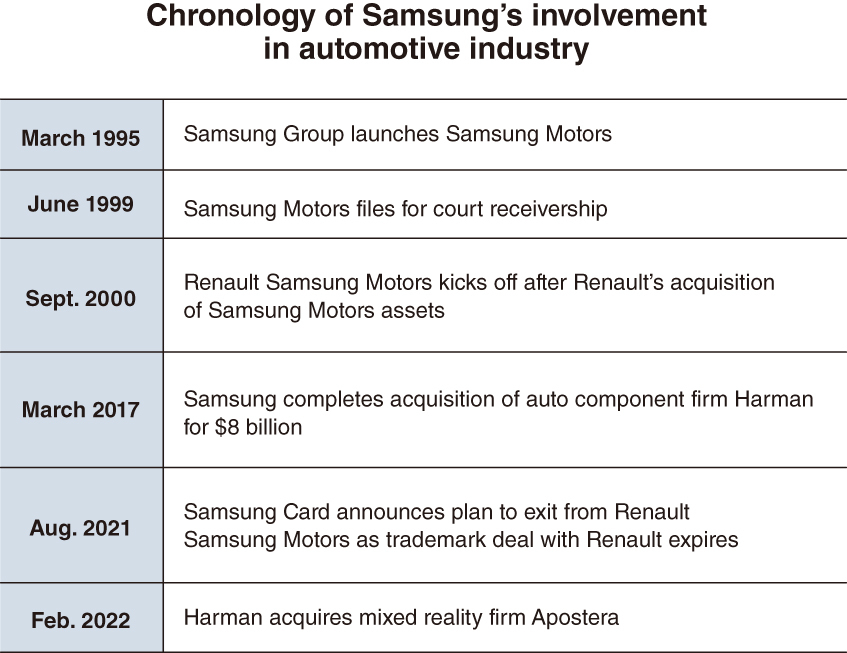 Back in the 1990s, then Samsung Motor failed to acquire cash-strapped Kia Motors and had to depart from the market after years of losses, while Hyundai Motor snapped up smaller rival Kia. Now, the Hyundai-Kia duo enjoys a whopping 90 percent market share at home.

“It is also no doubt that Samsung will be losing one of its biggest clients,” the official added.

Following Samsung’s acquisition of Harman International, the US automotive audio system developer, for $8 billion in 2017, Hyundai reportedly drastically reduced orders for Harman audio products that used to be installed in its high-end models.

According to industry estimates, Harman alone is expected to post about 11 trillion won ($8.4 billion) in sales this year, compared to the 7.1 trillion won back in 2017. Operating profits are estimated to exceed 500 billion won.

Other carmakers also would be reluctant to share classified operational information with Samsung, which is a key supplier and a potent rival.

Kwon of Kookmin University said LG Electronics, which is also making a big automotive push, is more likely to remain a supplier even compared to Samsung, considering its extensive partnerships with carmakers.

Riding high on the burgeoning market for connected driving, LG’s vehicle component solution unit is expected to see its total accumulative orders exceed a record 65 trillion won by the end of this year. Its sister firm LG Energy Solution, the world’s second-largest EV battery maker, is also investing heavily to expand production facilities in the US in joint ventures with local carmakers.

“I wouldn’t say ‘Samsung should make cars’ but the company will not be able to resist huge industrial shifts toward future mobility,” Kwon said. “Samsung will continue to weigh the feasibility of its own car business. It would be a strategic decision, rather than a matter of technological or development prowess.”

To ease their way back into the market, and also to tread carefully around Hyundai and other carmakers in the early stages, Kwon said Samsung could start to make special purpose vehicles such as buses and trucks first.