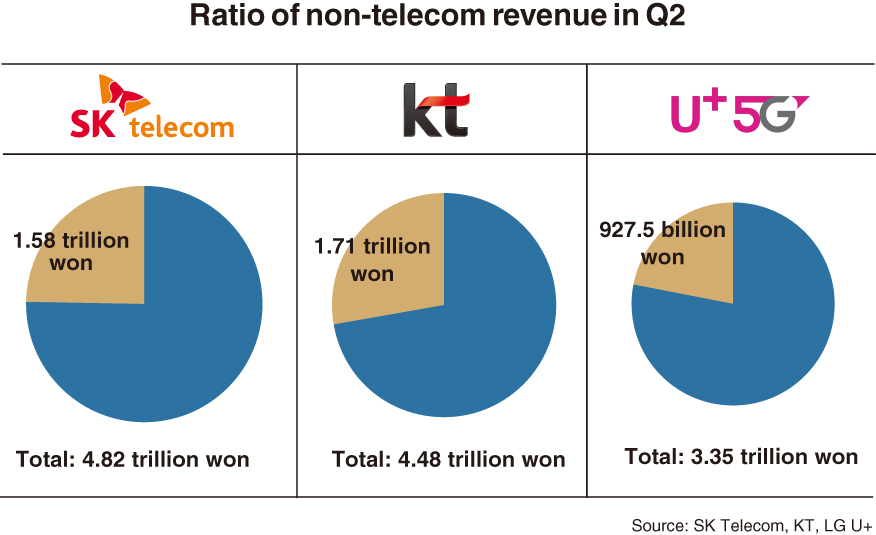 South Korea’s mobile carriers are adjusting their business strategy to expand their non-telecom businesses in a bid to take a share in the growing demand for digital content delivered via both mobile and fixed-line networks.

SK Telecom, KT and LG U+ each witnessed an increase in the share of non-telecom business in their total revenue in the April-June period this year, as more people stayed home and spent time watching video on IPTV and mobile platforms.

Top executives of the three major mobile carriers earlier said they would focus more on non-telecom business to boost their revenue and diversify into new growth engines, but the question lingers about whether they are prepared to compete with specialized content providers.

The companies have yet to integrate non-telecom business into their core business portfolio and stabilize their revenue streams, which tend to depend on the quality and variety of content. IPTV business, in particular, is vulnerable to external changes, such as the introduction of cheaper and better content services.

Experts said mobile carriers’ strategy to expand into the non-telecom business is right on track, but they still have a long way to go to fully transform their business structure based on a digital platform.

In the second quarter, however, the share of non-telecom revenues at the three mobile carriers firmed up. Making up the bulk of the non-telecom income were IPTV service and commerce businesses.

SK Telecom recorded 4.82 trillion won ($4.12 billion) in revenue during the second quarter, up 4.7 percent from a year earlier. The company’s non-telecom business revenue, including media, security and commerce, rose 10.1 percent to 1.58 trillion won during the same period.

SK Telecom’s non-telecom business has been posting double-digit growths since the second quarter of last year, and its share in total revenue surpassed 30 percent, which suggests that it plays a pivotal role in boosting the company’s growth.

KT is focused on gaining a foothold in the subscription business for its internet data centers and cloud service, while trying to kick-start new business items in the artificial intelligence, robots and digital biotechnology categories.

LG U+ remains more reliant on its telecom operations than its two bigger rivals. In the second quarter, the company’s total revenue was 3.35 trillion won, and its non-telecom business generated 927.5 billion won, accounting for 27 percent of the total revenue. LG U+ is interested in building up new businesses based on its 5G network. For instance, it won contracts to implement smart port projects in Busan and Yeosu, South Jeolla Province, taking advantage of its mobile edge computing technology.

The switch to non-telecom business appears inevitable as the companies face a slowdown in demand for their legacy telecom operations, whose revenue growth per year is around 5 percent or less.

The shift has been intermittently implemented in recent years, but the pandemic seems to have provided an impetus to accelerate their digital platform strategy that puts together telecom and non-telecom business.

SK Telecom CEO Park Jung-ho told local media earlier that the company is at a crossroads in its transformation into an artificial intelligence company, implying that he would push for more non-telecom business to reshape the telecom firm’s market position.

KT CEO Ku Hyeon-mo also made remarks about a similar strategy, pledging to increase the share of revenue from non-telecom business to account for about half the total 20 trillion won in revenue by 2025.

At a press conference held in June, LG U+ CEO Hwang Hyeon-sik said the share of non-telecom business would be increased from the current 20 percent to 30 percent.

But the three companies confront a slew of challenges in strengthening their non-telecom operations as the related technological foundation remains shaky and external shocks can derail their business plans.

Foreign content and solution providers are keen to increase their presence in Korea’s telecom and digital markets, a factor that could pose more obstacles for the carriers, experts said.