[Maxine Waters] I’m not new to this 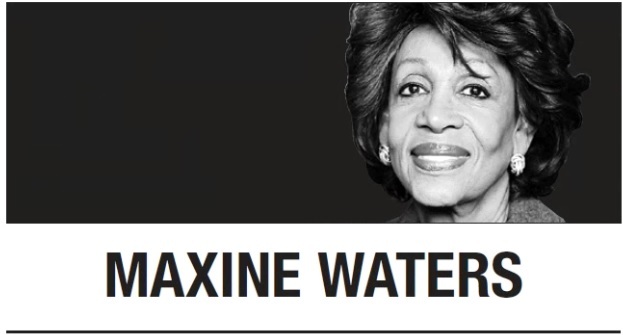 The journey to this moment has been painful and so very difficult. Derek Chauvin’s killing of George Floyd in Minneapolis was a shocking and disturbing experience for so many people. On video, Chauvin kneeled on Floyd’s neck for more than nine minutes as he took his last breaths.

Many of those who joined in the sustained protests last summer did so for the first time because of what happened to George Floyd and were motivated by their newfound understanding of the pain Black people endure in this country.

Moments after learning of the jury’s historic decision though, we learned that police in Columbus, Ohio, had shot and killed yet another Black person: 16-year-old Ma’Khia Bryant. Justice is not easy, and we know that because of our collective suffering through the killings of Michael Brown, Eric Garner, Breonna Taylor, Philando Castile, Daunte Wright and so many more.

I know that because I have been an activist participating in the civil rights movement and I have dealt with the issue of police abuse for many decades.

Over this past year, our young people have shown the world the level of dedication that is required to achieve even the smallest of triumphs, and the courage and tenacity they’ve displayed despite the setbacks has inspired me. I traveled to Minnesota to be with other members of the US Congress, civil rights leaders and other local officials to give support to the families affected by police violence, and to stand in solidarity with the young people protesting -- many of whom are understandably traumatized by the killings that are taking place at the hands of police officers in this country.

I attended a peaceful rally to demonstrate my support in this fight to get justice for people of color who are violated and killed day in and day out. While there, I was asked, Ms. Waters, what do we do if we don’t get a guilty verdict? What should protesters do? I responded, “We got to stay on the street. And we’ve got to get more active, we’ve got to get more confrontational.” Confronting injustice has been my life’s work.

Now, because of who I am, the right wing and members of Congress who subscribe to the views of groups like QAnon, the Oath Keepers, the Proud Boys and the KKK have targeted me. Those very people have done so to divert attention from the fact that they aided and abetted a violent, domestic terrorist insurrection led by Donald Trump.

To target me and say that I was violent or encouraging violence is a blatant distortion of the truth.

In a 1993 essay, ahead of the verdict in the federal civil rights trial of the officers who brutally beat Rodney King, I wrote to our community and I implored our young people to be responsible. I implored them to be about life and not about death. I cautioned them that we may not get justice and that if that were to be the case, we still must not endanger our lives or the lives of others.

Anybody who knows me or has seen the way I stand up for my community knows that I am nonviolent. In the same way that Martin Luther King Jr. created Project C -- Project Confrontation -- during the civil rights movement to further our march toward freedom, I am an advocate for peace and fairness and justice. Project Confrontation was not about violence, but about confronting the injustices in our society by letting our voice be heard and our presence be felt.

The fact of the matter is that Chauvin was found guilty of murder, not because of any one person’s opinion, but because the prosecution put on a great case and implored the jury to believe their own eyes.

I am hopeful that police chiefs will take more responsibility and I am hopeful that city councils and mayors who oversee police budgets will understand that they can no longer let their fear of police unions and losing elections stop them from moving us toward a better future.

I am hopeful that the police killings of Black people can be stopped.

This is my solemn wish, and this is my prayer.


Maxine Waters
Maxine Waters, D-California, has been a member of the US House of Representatives since 1991. She wrote this for the Los Angeles Times. -- Ed.