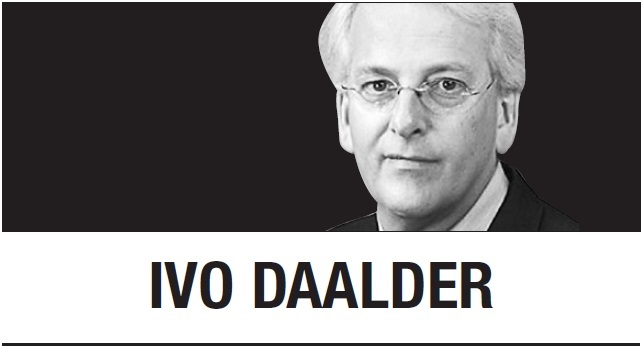 “The liberal idea has become obsolete,” Russian President Vladimir Putin told the Financial Times in an eye-opening interview. It would be easy to dismiss this declaration of liberalism’s demise, considering the messenger.

That would be a mistake. Putin has spent the better part of two decades centralizing his own power at home while actively undermining liberal institutions abroad. But it is the failure of the United States and its allies to adequately defend liberalism that is the real threat.

First, though, it’s important to understand that the liberalism under threat does not refer to American liberals -- meaning the left, as opposed to the conservative right -- as President Donald Trump seemed to think. When asked what he thought about Putin’s attack on “Western-style liberalism,” Trump responded by agreeing that conditions in Western US cities “run by an extraordinary group of liberal people” were deeply problematic.

However, Putin wasn’t talking about Los Angeles or San Francisco. He was calling into question the very liberalism at the core of the American republic itself -- the essential notion of ensuring the rights of the individual above all else. Or, as the Declaration of Independence, put it: “We hold these truths to be self-evident, that all men are created equal, that they are endowed by their creator with certain unalienable rights, that among these are life, liberty and the pursuit of happiness.” And that the role of government is above all to secure those unalienable rights.

This idea that the government exists to protect the rights of individuals -- by ensuring their freedom of speech and assembly, safeguarding a free press and equality of all under the law -- is what distinguishes Western liberal democracies from more authoritarian governments around the world. And the US, as leader of the free world, has for many decades been their chief champion.

But that is changing. In many of today’s liberal democracies, a growing number of people are rebelling against the governing elite, whom they blame for opening borders to ever larger numbers of migrants and for leaving all too many people behind in a globalizing economy that has shifted jobs abroad and incomes from the many to the few.

Rising discontent has provided openings for strongman leaders, some of whom now openly embrace an “illiberal” form of democracy. These leaders have sought to weaken a free press, undermine judicial independence and divide societies. They’ve appealed to populism and a narrow nationalism.

Hungary’s Viktor Orban has led the way. But he is not alone. Poland’s leaders of the Law and Justice party, Turkey’s Recep Tayyip Erdogan, Italy’s Matteo Salvini and, yes, Trump -- all have in one way or another weakened liberal norms and institutions in an effort to ride a populist wave to power. And, perhaps not coincidentally, all of them have shown a remarkable affinity for Russia and its decidedly nonliberal leader Putin.

But while the goal of these Western populist leaders is to gain power and strengthen their voice in world affairs, Putin’s aim is quite different. It is to undermine the very international order that has long sustained and defended the liberal democracies. And he has been aided in this quest by China, which is equally bent on challenging the rules and institutions that have long underpinned the liberal order.

China and Russia have done so by invading countries, annexing foreign territory and building artificial islands to stake out huge territorial claims in direct violation of international norms and rulings. They have upended international trading rules, interfered in democratic elections and sought to strengthen the illiberal forces in western countries.

These attacks on the liberal order are serious and real. But they cannot succeed on their own. And that’s where the real problem lies. For the United States appears no longer willing, and our Western allies do not seem able, to do what is necessary to defend the liberal order. Instead of bolstering security alliances, we are calling them into question. Instead of shoring up free trade regimes, we are undermining them with tariffs. Instead of embracing human rights and liberal values, we are embracing the very dictators who are violating them.

If liberalism is ending, it isn’t because Putin says so. It is because we would allow it to happen. So at this time of year when we mark the anniversary of the first truly liberal revolution, America’s declaration of independence, let us rededicate ourselves to uphold and defend our founding ideals at home and in concert with our friends and allies defend the liberal order abroad.


Ivo Daalder
Ivo Daalder is the president of the Chicago Council on Global Affairs and a former US ambassador to NATO. He wrote this for the Chicago Tribune. -- Ed.