Largely hurt by the 1997-98 Asian Financial Crisis and an ugly family feud, however, Hyundai Group lost most of its core businesses as well as its reputation as the top chaebol over the years. The group is classified as a midsized enterprise with assets worth 2 trillion won ($1.86 billion)

However, the group has kept its role and its brand as the sole business operator in North Korea against all odds. With unexpected prospects of a thaw on the Korean Peninsula, the revival of Hyundai Group has become the center of attention. And the market is already excited over its potential leading role in inter-Korean businesses in the future, though it has not happened just yet.


The share price of Hyundai Elevator, the only listed company under Hyundai Group, surged 40 percent after a historic summit between the leaders of the two Koreas.

“With the US-North Korea summit, it is an opportunity for Hyundai Elevator as the market interest reflects its expectation on Hyundai Asan, which holds 67.58 percent of (Hyundai Elevator) shares,” said Lee Sang-woo, an analyst at Eugene Investment and Securities.

In the Korea over-the-counter market, the value of unlisted Hyundai Asan jumped from 300 billion won in March to 1.26 trillion won as of June 8, the analyst noted. “The market will sensitively react to the fact that (Hyundai Asan) holds seven exclusive business rights (in North Korea) after the summit,” he said.

The value of Hyundai Asan, Hyundai Group’s North Korean business arm, lies in its exclusive rights to conduct tourism operations, build plants and dams and reconnect railroads -- infrastructure projects that both leaders of Korea promised to resume at their April 27 summit.

The right that gives Hyundai Asan the full authority to spearhead related businesses in seven infrastructural projects was established in 2000, less than two years after Hyundai’s founder, the late Chairman Chung Ju-young, crossed the border with the “cattle of peace.”

Granted by Pyongyang, Hyundai Asan holds sole business rights to construct power plants and expand existing plants in North, as well as to open wire and wireless services and operate internet networks. It could also lead railroad projects relinking Seoul and the North’s Sinuiju and Wonju, and the Kumgang line that used to connect the South’s Cheorwon and the North’s Naekumgang, before the 1950-53 Korean War.

The list also includes the construction of an airport to open the airway to Kumgangsan, a dam building project, the supply of water resources and tourism operations at major historic sites including Baekdusan, Myohyangsan and Kaesong.

Although it expressed hopes, the group said it would take a cautious approach. Despite tremendous progress after historic summits of the leaders of the two Koreas and the US, it might take some time for the US to verify the North’s willingness to denuclearize and then lift economic sanctions.

“Denuclearization of the Korean Peninsula should come first and then removal of economic sanctions on North Korea. We can’t start inter-Korean businesses unless the sanctions are removed, in other words, we are not sure when it could happened,” Lee said.

Hyundai Group Chairwoman Hyun is a daughter-in-law of Hyundai founder Chung Ju-young and widow of his son, Mong-hun. 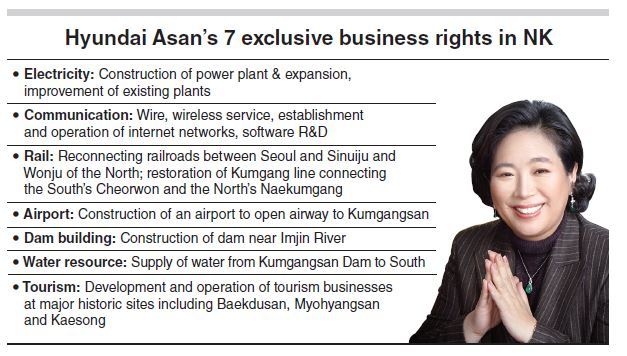 Chung Mong-hun was the fifth son of the founder, who was a North Korean refugee, and the successor to his father’s inter-Korean projects. Unlike other conglomerate leaders, the Hyundai founder saw the reunification of the two Koreas as a personal mission and hoped for his sons to carry on with that unfinished task.

But Chung Mong-hun killed himself amid a scandal that accused him of illegally funneling money to the North in support of then-President Kim Dae-jung’s Sunshine Policy.

Chung, along with his ailing father, was the one who started the Kumgangsan tours in 1998, carrying South Koreans via sea to the North Korean mountain. He continued to focus on the inter-Korean project while his brothers took parts of Hyundai Group during years of sibling feuds that ended in 2001 when their father died.

Hyundai’s project was widely seen as a contributor to inter-Korean relations, despite questions over its sustainability, the transparency of the money sent and the safety of tourists in the North.

The tours even physically reconnected the two Koreas by allowing South Koreans to cross the demilitarized zone for trips to Kumgangsan.

But the tours have been suspended since a South Korean tourist at the resort was shot dead by a North Korean soldier in July 2008. Hyun immediately visited Pyongyang and met then-North Korean leader Kim Jong-il. She said the late Kim promised to prevent a recurrence of the incident, but the tour program has been halted ever since.

For years, Hyun held on to Hyundai’s defunct North Korea business, saying that she did so to honor her late husband’s will, while losing the group’s lucrative businesses to her brothers-in-law.

Hyundai Motor Group absorbed Hyundai Engineering and Construction, the founding piece of Hyundai Group, after a battle with Hyun. The construction company was taken over by creditors in 2001 who decided to sell it to Hyundai Motor, saying they were not sure of how Hyun was to finance the deal.

Since then, the two conglomerates have shared no ties -- only their heritage by blood.

Hyundai as brand for inter-Korean projects

Despite the relationships, the market is favoring affiliates that are now under Hyundai Motor Group including Hyundai Steel, Rotem, and E&C.

Asked whether they hoped to enjoy the benefits of holding Hyundai’s heritage and name, they reiterated that they are separate entities from Hyundai Group.

“We are separate groups and do not operate together. We might participate as a bidder if there are business opportunities in North Korea but we don’t have concrete plans on inter-Korean projects,” said an official at Hyundai Motor Group.

Hyundai E&C also said that it has not thought of doing business in North Korea, not even setting up a task force team.

But market analysts have different ideas.

“Hyundai E&C would benefit the most from inter-Korean businesses,“ said Chae Sang-wook, an analyst at Hana Financial Investment, listing a previous project that the builder participated in in the North, including the construction of light-water reactors driven by a trilateral organization set up by South Korea, Japan and the US.

“Not only did Hyundai E&C hold 35 percent of shares in the light-water reactor project, but it also owns 7.5 percent of Hyundai Asan -- not to mention that it represents pan-Hyundai affiliates (as a former parent company).”