Retail sales and facility investment fell 1 percent and 0.3 percent, respectively, from a month earlier in August, according to the data from Statistics Korea.


The simultaneous downturn in the three key indicators of domestic demand was the first in 11 months.

Overall industrial output stayed unchanged from the month before in August. But it was estimated to fall 0.5 percent, excluding the production of semiconductors and electronic components, which rose 12.4 percent and 5.5 percent on-month, respectively.

The average factory operation rate remained at 72 percent in August, down from 73.1 percent in the previous month, with inventories of manufacturing firms increasing 2.1 percent.

Separate data released earlier by the statistics office showed the on-month increase in the number of employees stood at 212,000 in August, the lowest in 4 1/2 years. Youth unemployment reached 9.4 percent, the highest for the month since 1999, during the aftermath of a foreign exchange crisis. 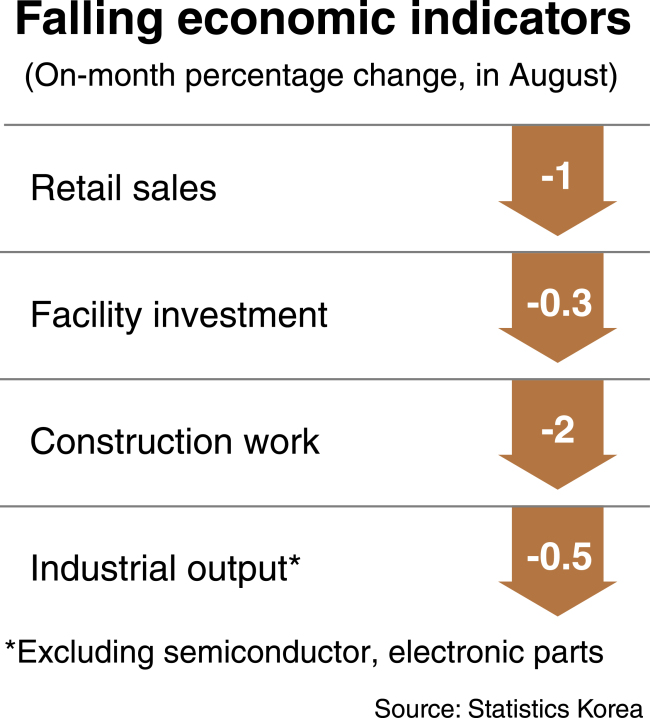 The business survey index for October fell to 92.3, down from 94.4 tallied a month earlier and 96 the year before, according to a recent survey of the country’s top 600 companies.

The fall in the index -- a reading below 100 means pessimists outnumber optimists -- reflects growing concerns over North Korea risks and trade pressures from China and the US, said a report from the Korea Economic Research Institute, which conducted the survey.

The Ministry of Strategy and Finance has tried to contain concerns over the deepening economic sluggishness, saying the Korean economy stays on course to achieve the official growth target of 3 percent for this year despite downside risks at home and abroad.

But many economists note the government-set growth goal will be out of reach as measures taken to curb rising household debt and house prices limit efforts toward boosting domestic demand.

But growth in the country’s exports is likely to slow in the fourth quarter, partly due to fewer working days and high raw materials costs, according to the Korea International Trade Association.

In the years to come, global market shares of Korea’s manufacturing exporters are expected to shrink amid rising protectionism and mounting competition from foreign rivals, experts say.

Criticism has been raised that policies pushed by President Moon Jae-in’s administration to promote income-led growth and economic fairness are not suitable to cope with challenges facing the Korean economy and ensure its long-term growth.

Local firms have complained measures taken since Moon took office in May have increased the burden on them, making it harder to maintain competitiveness or simply stay afloat.

“Almost all Korean companies now seem to be having difficulties more or less,” said Sung Tae-yoon, a professor of economics at Yonsei University.

He emphasized the importance of efforts to nurture more companies with global competitiveness.

Aware of the growing criticism that his policy has tilted toward expanding welfare programs and meeting labor demands, Moon asked Cabinet members last week to hasten to craft and implement a new growth strategy based on industrial innovation.

The government is preparing to announce a series of measures to promote innovation-led growth in tandem with income-led growth in the months to come.

Economists say it is important to accelerate regulatory and labor reforms, which they say are crucial to carrying forward innovation-led growth.

The government seems poised to push for deregulation in a more aggressive and sweeping manner, asking cooperation from ruling party lawmakers in passing bills aimed at creating regulation-free industrial zones and promoting the service sector.

But the Moon administration has not said much on how it can draw concessions from unionized workers to make the labor market less rigid.

The World Economic Forum noted in a report last week low labor market flexibility weighs heavily on the Korean economy, advising the country to make more efforts to retain its innovative drive in this field.

Korea ranked 26th out of 137 countries in the WEF’s 2017 global competitiveness index. In terms of labor market efficiency, however, it placed 73rd.

Experts also recommend support for corporate restructuring, which has been shelved under the Moon administration.

“Restructuring work needs to be done immediately, while job creation is a long-term task,” said Chung In-gyo, an economics professor at Inha University, criticizing the government for failing to handle the matters according to a proper timeline.