Government data showed that the number of employees at companies with workforces of more than 300 reached 2.46 million workers in the second quarter of this year, a decrease of 25,000 compared to a year ago.

The fall is the largest since the third quarter of 2010, when the number of employees at large companies plunged by 84,000, following the 2008 global financial crisis.

Statistics Korea attributed the drop to the recent sluggish economic performance in manufacturing, which is one of Korea’s largest hiring sectors.

Although the number of workers in the manufacturing sector increased by 16,000 in June, the first rise since June last year, the number of employees dropped by 23,000 in the second quarter compared to the previous quarter.

However, despite the number of large corporation positions decreasing, the number of employees at small and medium-sized enterprises is on the rise.

According to the data, the number of employees at companies with four or fewer staff members reached 9.87 million this quarter, marking an increase of 147,000 from the same period last year.

The increase in workers at SMEs is the largest spike since the first quarter of 2014, when the number of employed increased by 196,000. 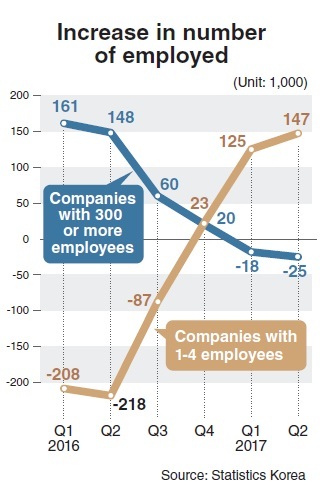 Despite President Moon Jae-in’s pledge to create roughly 810,000 new, high quality jobs during his five-year term, the government’s latest data showed that the market for quality jobs is worsening.

The country’s unemployment rate for June was 3.8 percent, an increase of 0.2 percentage point on-year.

The number of newly employed workers last month saw the smallest increase in five months, hitting 26.86 million. While the figure marks a 301,000 increase compared to a year earlier, it also represents the lowest monthly increase since 243,000 in January.

As for the younger generation, government data last month also showed that the youth unemployment rate jumped to its highest level for the month of June. The jobless rate for young people, aged between 15 and 29, was recorded at 10.1 percent, up from last year’s 9.4 percent and May’s 8.6 percent.