Samsung said it will begin an inspection to determine the exact cause of the explosion. 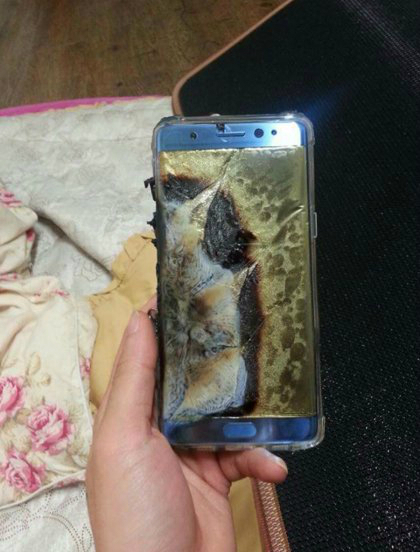 The woman said in an online community: “My boyfriend’s Galaxy Note 7 exploded while charging overnight. It’s been less than a week since he started using the phone. I woke up by the bang and the smell of smoke.”

She added she and her boyfriend were not injured in the incident, revealing photos showing the severely damaged phone and a burned blanket.

Some market watchers warned the latest explosion case, if confirmed to be genuine, could negatively affect sales of the smartphone.

They said the fire was possibly due to the phone’s lithium-ion battery, which is susceptible to overheating.

In the meantime, the new Note phone is selling like hotcakes in Korea, with preorders exceeding 400,000 units, more than double the figure for the company’s flagship Galaxy S7 launched in March.

Earlier in the day, the Korean tech giant apologized to local customers for delayed shipments, pledging to deliver all preordered phones by the end of the month.