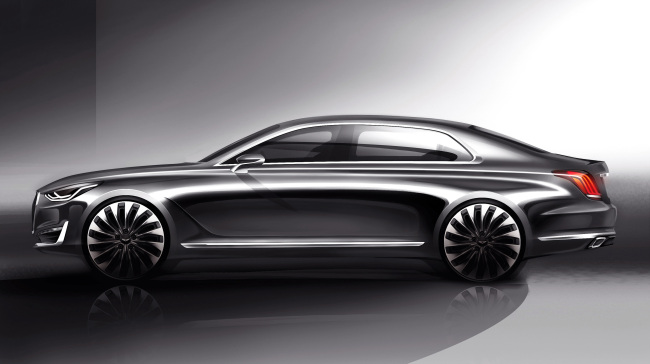 It is expected to help Korea’s largest carmaker spearhead into the global luxury segment -- a relatively new territory for it -- and comes less than a week after Hyundai Motor Group vice chairman Chung Eui-sun on Nov. 4 declared the launch of the brand to compete against powerhouses such as BMW and Audi.

“We declare the launch of new luxury -- earlier, we had to use excessive options in order to show off our brands, for the conspicuous consumers. But here we are moving forward for the people who prefer their own satisfaction rather than what people think of them,” said Hyundai Motor vice chairman Yang Woong-chul at the company’s research center in Hwaseong, Gyeonggi Province.

“We will add G80 and G70 sedans alongside sport utility vehicles and sports coupes to our lineups to complete the world of our new luxury brand Genesis,” he said.

Inheriting the platform of Hyundai’s full-sized sedan Equus, the EQ900 is infused with Genesis’ “pleasure of driving and sportiness.”

Under the main concept of “Human-centered Luxury” driven by the “full range safety,” “first-class comfort” and “refined performance,” the car has several noticeable features that are on par with or go beyond its global competitors such as the Mercedes-Benz S-class, the BMW 7-series and the Audi A8 models.

Perhaps the most noticeable feature is the nearly autonomous driving program including Highway Driving Assist.

By activating the program, the driver does not have to manipulate or steer on the motorway because the car automatically drives and adjusts the distance between it and other cars. It is also equipped with the face-lifted rear-warning system to avoid danger from the rear.

About 51.7 percent of the body is made with advanced high-strength steel and 19 core parts were made using the hot-stamping technique.

In terms of design, from the larger grille on the facade to the futuristic headlights and what used to be Equus’ signature taillights, the exterior is lighter but more graceful, Hyundai officials said.

The interior has been upgraded. The “modern ERGO seats” enable the best driving posture for drivers while offering plenty of relaxation for other passengers.

Designed after the first-class seats in airplanes, the “First Class VIP Seat” can be adjusted into relax, reading and video-watching modes by touching a button on the armrest. These modern ERGO seats have been accredited by the German civic group Aktion Gesunder Rucken for their comfort and functions of back protection.

The 3.3-liter turbo gasoline direct injection engine was added to the lineup, allowing up to 6,000 revolutions per minute. And the 8-speed automatic transmission allows both “chauffeurs” and “owner drivers” to enjoy the performance, while the automatic four-wheel drive system with Hyundai Variable Control Suspension enhances safety.

“We have tested every road condition possible in Korea and even the little road bumps and tinkering. This is the optimal car for Koreans and of course, drivers around the globe,” said Hwang Chung-yul, senior vice president of the company.

The price for the Genesis EQ900 has not been set yet. Sales will start in December.