The monthlong festival of design, which opened Oct. 15 in the southern city of Gwangju, presents 12 exhibitions -- all based on local and global networks of designers. Held at the Gwangju Biennale exhibition hall, the event convenes some 3,900 Korean and foreign designers, about 1,800 pieces of design works and 33 manufacturers.

The Asian Design Hub exhibition is a result of long-running networks of Korean, Chinese and Japanese designers through Kookmin University’s renowned Oriental Culture and Design Center.

“When Asia was obsessed with copying and following Western design, we focused on how to incorporate traditional aesthetics of Asia into modern lifestyles at the center. The exhibition shows our quest to explore different design identities of East Asia and ways to incorporate them into our modern lifestyle,” said Choi Kyung-ran, general director of the biennale and design professor, who heads the OCDC.

The exhibition, cocurated by Korean, Chinese and Japanese designers and scholars, showcases a total of 259 living items, such as tea sets, bowls, tables and chairs, along with decor items that reflect modern reinterpretations of the countries’ traditional aesthetics.

Japanese designer Kazuyuki Hashimoto created an enclosed cozy tea room with wooden strips surrounding the round space. His use of natural materials, such as wood and stones reflect Japanese sophistication and restraint, as well as people’s desire for tranquility in the hectic modern lifestyle.

Chinese designer Ruan Hao made a home office table for cat owners. The wooden table features soothing curves at the bottom for cats to hide in and move around, as well as a round space to store stationery items.

The biennale launched an unprecedented collaboration between the world’s leading designers, including Alessandro Mendini, Stefano Giovannoni, Alberto Meda and Odile Decq, Korean designers and local manufacturers in Gwangju. Designers worked with Gwangju-based manufacturers to produce their new design products, which are on view at Gallery 1 under the title “Gwangju Branding.” 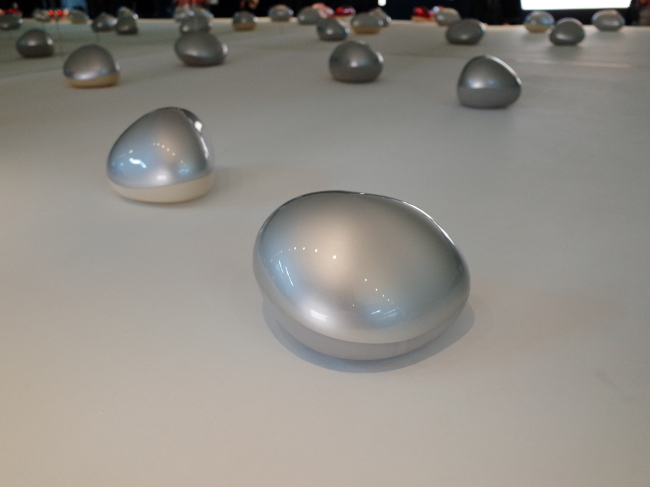 "Stone" by Odile Decq (Gwangju Design Biennale)
French designer Decq joined hands with a Gwangju-based molding company to produce lighting fixtures in the form of pebbles the designer saw on a Korean beach. Italian designer Giovannoni teamed with another molding company in Gwangju to produce the new design for his signature “mini-men” tableware. 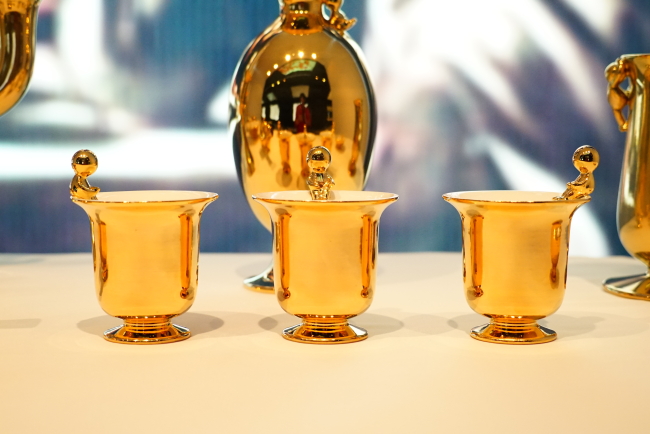 "Mini-men Playing with Others, Sitting, Climbing or Fishing" by Stefano Giovannoni (Gwangju Design Biennale)
“The products on display here are new designs by the designers showcased for the first time,” said Choi. “Designers have been satisfied with the quality of the prototypes. They are expected to have a full manufacturing plan for the new design products soon.”

Mendini was unable to find suitable local manufacturer to produce his tree-inspired table lamps, apparently due to the tight schedule. 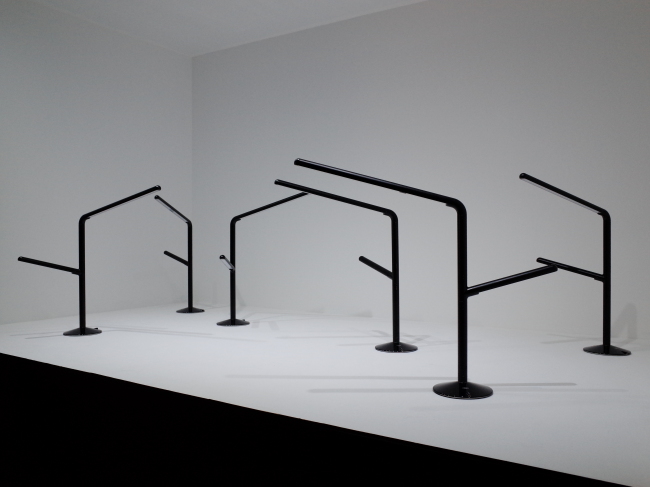 "The Tree" by Alessandro Mendini (Gwangju Design Biennale)
This year‘s biennale struggled with a reduced budget and tight schedule this year.

Designers and manufactures were given two or three months to discuss design and test their prototypes before the biennale exhibition.

“We had such a tight schedule to collaborate with local companies. We had to make a complete product within only two months,” said Han Kyung-ha, president of Woofer Design and Development, who worked with a Gwangju-based company to produce cooking flippers.

The government slashed its budget by almost half from 5 billion won ($4.3 million) to 2.3 billion won for this year’s exhibition, and reduced its exhibition period to one month, an unusually short period for a biennale-scale event.

This was believed to have been due to criticism raised by state administrators against the design biennale, held alternately with the Gwangju Biennale. Local authorities have pointed out the content of the design biennale resembled that of the Gwangju Biennale, increasingly geared to show the artistic side of design, and that the event lacked “global” factors, such as connections and collaborations with foreign designers and global design markets.

“The biennale is all about experiments and creativity of design. It’s an incubator for such creativity to develop and drive growth in the design industry. I’m sure the creativity nurtured through the biennale will bring productive results to the local economy and industries,” said Choi.