North Korean leader Kim Jong-un has made his first public appearance in more than a month, quelling rampant speculation over his health or a possible political crisis.

Kim gave a "field guidance" at a new apartment complex in Pyongyang for satellite scientists, according to the North's official Korean Central News Agency (KCNA) on Tuesday.

It released several photos of Kim, including ones of him beaming a smile and walking with a cane. The country's main newspaper, the Rodong Sinmun, also carried related reports and photos. 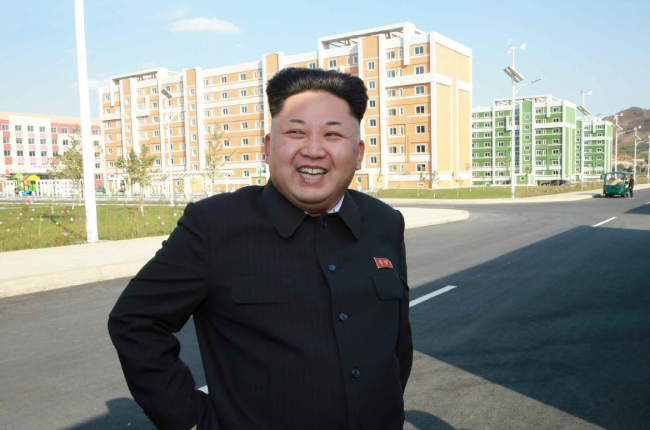 It was his first public activity since Sept. 3, which suggests he has no major health problem and his grip on state affairs remains firm.

The KCNA and the newspaper gave no specific date for the appearance in the Tuesday morning report. It is presumed to have happened a day earlier, given that previous reports on the leader's activities were usually delayed one day.

"Watching the exterior of the apartment houses and public buildings nicely decorated with diverse color tiles, he was very pleased to see them. He said they looked very attractive, presenting fantastic scenery," it said.

Kim was quoted as adding, "Our scientists are patriots who are devoting all their lives to building a rich and powerful nation ...It is necessary to project and treat scientists preferentially and always take care of them."

He was accompanied by Hwang Pyong-so, director of the Korean People's Army General Political Bureau; Choe Ryong-hae, the Workers' Party secretary; and other high-ranking officials.

"It may have some indications related with (his regime's) policy of simultaneously developing its nuclear program and economy," a senior unification ministry official told reporters.

He added the government has no clear information on the reason for Kim's prolonged absence from public view, including his failure to show up at important national events.

Some media raised the possibility of Kim suffering a critical illness or facing a military coup.

The South Korean and U.S. governments have dismissed speculation over Kim's political instability, citing their own intelligence.

Based on the analysis of relevant intelligence, the South's officials had three possibilities in mind, according to informed sources here.

Kim may be afflicted with gout. Kim might have had his ankles broken or sprained while playing basketball. Or he may have acute inflammation in his feet from excessive sports activity.

Kim, reportedly in his early 30s, became the North's leader after his father died in late 2011. Officials and analysts have said Kim has since consolidated power. The young leader even executed his uncle Jang Song-thaek last year, accusing him of treason. (Yonhap)