The “Culture Chanel, The Sense of Places” exhibition, currently on display at Dongdaemun Design Plaza, offers answers to this question. The exhibition reveals the inspirations that Chanel’s pioneering designs were based on throughout the 88 years of Gabrielle Chanel’s life. The touring exhibition has been shown in Moscow, Shanghai, Beijing, Guangzhou and Paris starting in 2007. 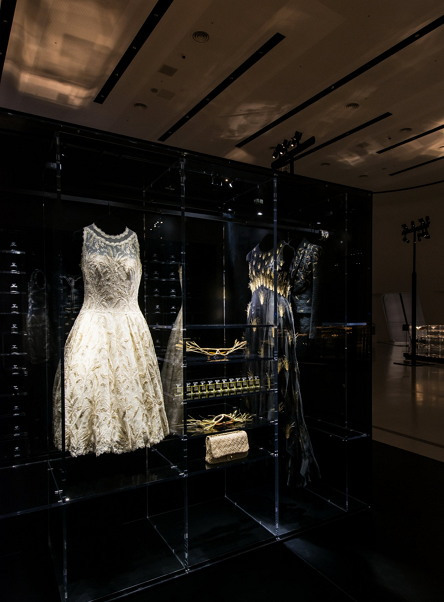 Divided by the places Gabrielle Chanel lived since her birth in 1883 until her death in 1971, the exhibition focuses on the aesthetic elements of the places Chanel lived and how she incorporated them in her creations. It also shows how the earlier inspirations have lived on in modern collections created by Karl Lagerfeld and the Chanel fashion house.

“Each place, city, country she’d been to affected her creations a great deal. The experiences she had with each place are reinterpreted in her work,” said Jean-Louis Froment, curator of the exhibition, in an interview.

The signature little black dress that took the fashion world by storm finds its origin in the nuns’ black dress with a wide white collar at the orphanage where Gabrielle Chanel spent her teenage years in Aubazine, France. Her father left her and her two sisters at the orphanage after her mother passed away due to an illness.

Although Aubazine seems to have held sad memories for Gabrielle Chanel, the place helped Chanel define her creations’ identity and aesthetics. The stained glass window of a chapel led to the formation of Chanel’s double C logo later. The stars, moon and sun that adorned Aubazine’s coat-of-arms and the abbey’s paved pathways inspired her bold fine jewelry collection.

“Gabrielle Chanel was a paradox ― she extracted beautiful elements from what seemed like a depressed and unhappy stage of her life. Her identity is a mixture of happiness and sadness. I think the paradox in her life gave birth to the contrast of black and white color in her design,” explained Froment.

Chanel defied the stereotypical style of women at the time and tried to bring modernity to women’s clothes, incorporating elements from men’s clothing. At her first boutique in Paris, which initially sold hats, Gabrielle Chanel started to offer outdoor wear such as jersey tunics inspired by those worn by fishermen, striped shirts and pants influenced by sailors’ uniforms.

“Chanel incorporated fabrics and designs that were only used in men’s clothing. She brought comfort in women’s clothes. The famous tweed fabric, being used in Chanel jackets and bags, once belonged to men’s clothes. She was the first to give a twist to the use of these fabrics in the pursuit of comfort,” said Froment.

Outside France, Venice was a place that became Gabrielle Chanel’s major source of inspiration. The beauty of the city she found in its labyrinth of small streets, and the tarnished gold in the Byzantine mosaics added distinct character to her creations. The lion, the emblem of the city, became a favorite motif for Chanel jacket buttons, bag clasps and jewelry.

The signature Chanel No. 5 perfume was born in 1921 when Gabrielle Chanel entrusted a French perfumer to the tsars of Russia with the creation of her signature perfume. Gabrielle Chanel gave the perfume a timeless luxurious image with the simple laboratory label “No. 5 Chanel Paris.” On the black wax seal she affixed a simple C as a sign of her ownership.

“The exhibition explains the beautiful history and anecdotes behind Chanel’s fascinating creations and what makes its creations still appealing to many women around the world,” said Froment.

The “Culture Chanel, The Sense of Places” continues through Oct. 5 at Dongdaemun Design Plaza. Admission is free. For more information, visit www.culture-chanel.com, or call (02) 2153-0700.