At the start of her term, a Gallup Korea polls gave Park an approval rating of 42 percent, which has climbed to 59 percent. 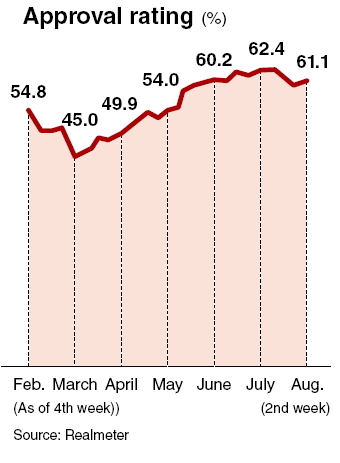 Results from the research firm Realmeter shows a similar pattern.

According to Realmeter’s survey results, Park’s approval rating began at 54.8 percent in February but climbed to 63.3 percent by the third week of June. Although the figures dipped below the 60-percent mark following the controversial tax revision plans, her ratings soon recovered after she ordered the proposal to be reviewed.

She is also the second president whose approval ratings have gone up after inauguration.

The increase is thought to have been fueled in large part by her foreign and security policies, particularly those regarding North Korea. In the most recent Gallup poll, 28 percent of those who said that Park was doing well cited her North Korea policies.

“In engaging North Korea, (Park) has stuck to principles regarding the Gaeseong Industrial Complex without expanding (the issue) to overall relations,” professor Kim Jun-seok of Dongguk University said. Unlike Park, her predecessor had taken either open or hard-line stance on North Korea, causing inter-Korean relations to swing wildly between reconciliatory and hostile.

Experts also say that Park’s efforts regarding relations with China and the U.S. have played out well, allowing Seoul to strengthen the U.S.-South Korea alliance while improving ties with China.

In fields concerning domestic environment, however, Park’s efforts so far are considered mediocre or worse.

While related policies have been rolled out, experts say that more drive and time are needed.

“There were results in some areas including food hygiene, but I have doubts about whether improvements were made in areas that are felt by the public such as school and sexual violence,” Pusan National University’s Kim Yong-cheol said.

As for economic policies, polls and expert observations point to less-than-impressive results.

In addition, her plans to expand welfare measures without raising tax rates are stoking fears for both the country’s finances and whether her welfare pledges will be realized.

However, the field she received the worst assessments in is politicking, the one area she is considered to have proven credentials in.

In her years as a member of the National Assembly she led the conservative party out of crisis on a number of occasions, and led the party to victory in various elections earning herself the name “queen of elections.”

Since taking office as the president, however, Park has made numerous mistakes in selecting high-level government posts, and has been criticized for her solitary leadership style.

Her Cabinet was completed some time after her inauguration with several minister-level nominees standing down over allegations of past misdeeds.