The nation relies more heavily on credit cards then any other payment method. According to government statistics, about 65 percent of the nation’s payments are via credit cards, in comparison to Australia at 47 percent, the United States at 37 percent and Japan at 16 percent.

Believing that the nation’s excessive reliance on credit cards has led to today’s daunting household debt, the Financial Supervisory Service and other state-run financial regulatory bodies have taken countermeasures.

The government set the tax redemption rate of check card payments to 30 percent, while halving that of credit card payments to 15 percent. Stricter conditions for signing up for credit cards ― applicants need to be at least 20 years of age, with a sixth grade or higher credit level and 500,000 won of monthly disposable income ― are only part of the regulatory plan. 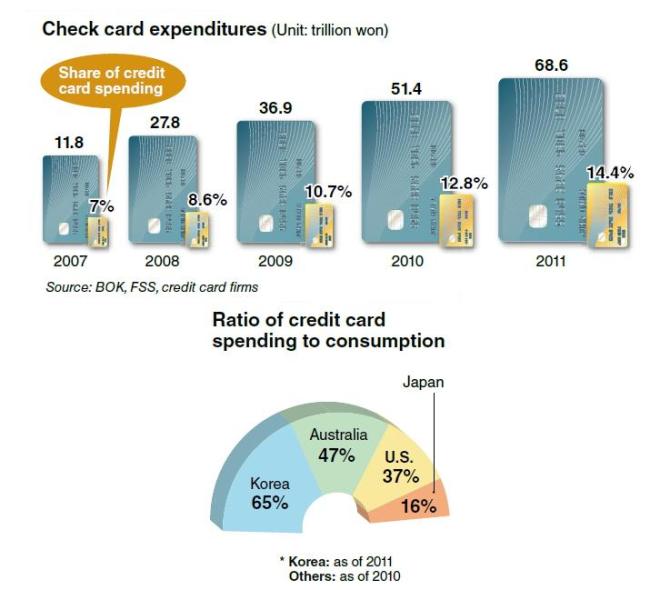 It is also stipulated in the amended Credit Financial Business Act, enforced since 2012, that tighter restrictions will be applied to credit card marketing operations.

However, consumers are still torn between the extensive benefits offered by credit cards and the psychological money-saving effect of the check cards.

Many credit card users agree that they are still useful, if not indispensible.

“I only use credit cards, mostly because I cannot give up all the credit that I have accumulated so far,” said a 36-year-old senior official of a large securities firm who asked not to be named.

“I am frequently on business trips abroad, and with my credit card, I can pile up flight mileage points and use the flight lounge free of charge,” he said. “Above all, check cards are simply useless outside the country. Check card users will have to withdraw cash and carry it with them.”

Big name credit card companies, such as Shinhan Card and KB Kookmin Card, are pushing to give more weight to its check card marketing, according to the Credit Finance Association.

“Check cards used to yield little profit for credit card firms,” said a KB Kookmin Card official. “Back then the commission fee paid to brokers were high. But now the government is focusing on making the commission rate reasonable, so that the loss from high commission is lessened or removed.”

“That is a profitable plus for companies issuing check cards,” the official said.

The Credit Finance Association stressed, however, that the issuers of check cards still have multiple challenges to overcome, despite rising popularity for these cards.

“It is true that check cards are on the boom and the market is expanding,” said a CFA official.

So far the check card marketer’s strategy is to promote check cards as anti-debt barriers. Check cards enable users to pay within the boundary of one’s savings, while credit cards let them pre-spend their income for the following month.

Market observers evaluate that such promotions have reaped considerable success, as the number of check cards issued in 2012 exceeded 100.2 million. Growing wariness against snowballing household and personal debt, they said, has been the major cause of the new phenomenon.