From Monday through Saturday, new programs are uploaded and she enjoys the flood of information.

“On weekends I download ‘Naneun Ggomsuda (I am a Slacker)’ and ‘Naneun Ggobsarida (I am a Plus-one.)’ On Wednesdays I take ‘Jeogong Bihaeng (Fly Low)’ and ‘Issue-leul Teoleojuneun Namja (Man Who Investigates Issues.)’ I listen to them while I’m commuting,” she said.

Kim is one of millions of Koreans who indulge in political shows. Rather than sitting in front of the TV or a laptop computer, they use their MP3 players or smartphones to listen to comedians talking about political issues. They do so on the streets.

According to a survey by Trend Monitor of 1,200 smartphone users, about 55.7 percent were aware of podcasts. Podcasts refer to audio or video content distributed online.

They have become as common as smartphones themselves.

In the survey, 10.5 percent of the respondents said they often listen to podcasts, mostly political satire. Of them, 63 percent said they like the hosts’ political views, followed by 51.3 percent of regular listeners saying they appreciate the information that major media does not cover. Shrewd criticism of the current administration’s policies was picked by 46.9 percent as the main reason for tuning in.

Five or so of the most downloaded podcasts in Korea are about politics and about twice that are circulated regularly through the new medium. 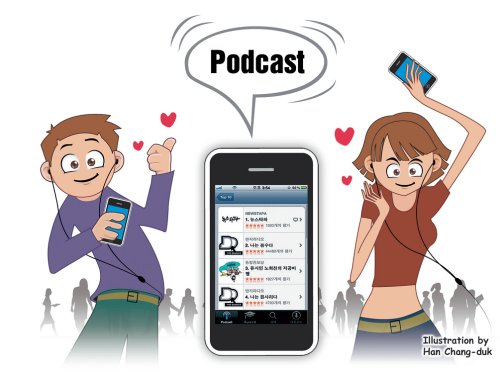 In the past year, the vocations of podcast hosts have diversified from pundits to reporters and to politicians themselves.

The boom of political podcasts is said to have been spurred by the groundbreaking podcast, “Naneun Ggomsuda (I am a Slacker),” which ridicules President Lee Myung-bak.

The program, which started airing on April 27, 2011, is now one of the most influential voices in the country. It claims to be the world’s most downloaded political podcast, attracting 2 million downloads through iTunes and another 4-5 million through other platforms. According to the research company Real Meter, it reaches an an estimated audience of 11 million.

The main attraction of the show is the painstakingly gathered information about the administration pasted with giggles, swearing and lewd slang.

The stimulating yet casual talk soon turned into an influential medium urging young voters to turn out for liberal candidates. Seoul Mayor Park Won-soon was one beneficiary of the podcast; in the run up to the Oct. 26 Seoul mayoral by-elections, his transition from obscurity into the frontrunner was aided by appearing on the show, which appealed to listeners for their votes.

Moreover, the “conspiracy theory” that podcast hosts and guests raised about the hacking of the websites of Park and the National Election Commission on the day of the mayoral by-election was later verified by the prosecution, and as a result, helped the podcast gain credibility.

Before the investigation started, it had claimed that the ruling party must have been behind the incident. A probe found their claim true to some extent. A former aide to a ruling party lawmaker confessed to the cyber attack, apparently intending to make it difficult for voters to find information on the location of polling booths on the NEC website. At that time, a low turnout was regarded as favorable for the ruling party.

“The success of the ‘Ggomsuda’ podcasts show that many people believe the administration and society as a whole are rotten and that information distributed through traditional media such as newspapers and television has been distorted. Disappointed, they turn to alternative media, with the belief and expectation that they could provide a breath of fresh air,” said professor Lee Chang-hyun of Kookmin University.

He said the launch of the program was so well-timed that it has drawn an explosive response not only from young voters, but also from white-collar office workers who follow new trends of information technology.

Shocked and threatened by the power of online chat shows, even the conservative old guards of society have tried to ride the podcast wave, but flopped.

“Myeongpum Suda,” launched by star conservative political commentator Byun Hee-jae as a rival to “Ggomsuda,” stopped airing in October after only two episodes. “Yes, You are Kkomsu,” began with a panel of lawyers, doctors and others to target a wide-ranging audience, only to run aground after three episodes.

For now, conservatives seem less likely to win the hearts of the audience, especially the young generation disenchanted with corruption in officialdom. Reporter Heo Jae-hyun said it was not the podcast but the content that has made the program go awry.

“The panelists did not have any clear idea about what they were talking about. Without the proper content, no one could succeed in the field,” he told a local daily.

Another critic said that the fact that the majority of the podcast audience is in their 20s and 30s has contributed to recent election wins by liberal candidates, and is also expected to work for the time being.

However, cracks seem to have shown up in liberal podcasts. “Ggomsuda” panelists have recently come under fire for their “filthy” sexist remarks about women posing in bikinis to support Chung Bong-ju, a former panelist imprisoned over charges of spreading false information about the president. Their claims have also been criticized by their opponents as partly incorrect or intentionally distorted.

The imprisonment of Chung, a former lawmaker, has emerged as a hot-button issue. Despite being convicted in court, his supporters have condemned the ruling as political persecution of Chung and opposition forces. On the other hand, conservatives have showcased his conviction as demonstrating that liberals will take no responsibility for smearing opponents.

“Podcasts have become an alternative tool of media. The producers and crews need to be more responsible about what they distribute,” professor Lee Taek-kwang of Kyung Hee University said.