Should there be a new tax for the rich?

Calls for the imposition of a new tax for the nation’s richest have become part of the mainstream political discourse in Korea, echoing similar debate in the U.S. The most recent proposals for a tax on the wealthy have come from a somewhat unlikely source, the conservative Grand National Party. GNP Rep. Kim Sung-sik, backed by other reformist lawmakers, last month called for a new 40 percent tax band for those with the highest incomes. No doubt keenly aware of the GNP’s image as a party of the rich, Hong Joon-pyo, the party chairman, quickly threw his support behind higher taxes on big earners.

But not everyone is happy with the GNP’s new direction. Strategy and Finance Minister Bahk Jae-wan, part of an administration that until recently was pushing for tax cuts, initially slammed the idea of a new tax as “populist.” More recently, he expressed concern over how it would affect work morale and investor sentiment. Adding to the voices on the issue within the GNP, former chairwoman Park Guen-hye on Thursday highlighted what she perceived to be the limitations of higher income taxes, instead urging her party to consider raising capital gains taxes to target financial transactions and assets. 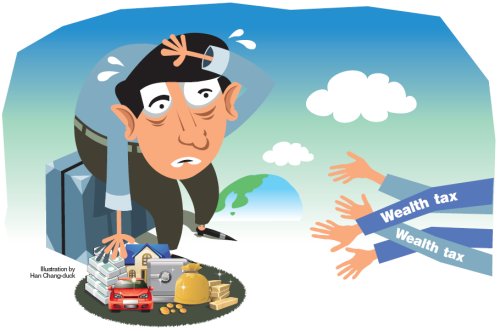 Yes: Market failures should be corrected

Calls for the institutionalization of a wealth tax are growing worldwide. Pioneered by a small number of enlightened rich such as Warren Buffett, a wave of demands for an increase in tax rates for themselves has been recently observed in the U.S., European countries, Japan, and also in Korea. The pros and cons of the so-called Buffett tax geared to improving the conditions of the socially and economically underprivileged are currently under debate.

While the arguments of its proponents are obvious, the opponents of the wealth tax idea raise issues primarily concerning the following two points: its effectiveness and the potential violation of the market principle. They warn that an increase in taxes for the rich will eventually deteriorate further, rather than improve, the life of the underprivileged by discouraging consumption by the rich. Further, they argue that the wealth tax is a dangerous idea to punish the rich, which seriously violates the fundamental principle of the free market economy. Most such concerned voices believe in the hegemonic neo-liberal ideology which pursues the realization of the perfectly competitive market not only in the economy, but also in every domain of society.

If carefully and selectively implemented, improving the life of the underprivileged by increasing taxes for a small number of extremely rich people is obviously a viable option to resolve the increasingly serious unequal distribution of wealth. This type of idea is certainly worth serious discussion especially considering the current situation of Korea in which the proportion of irregular workers is highest in the world, the size of household debt is seriously large, and unemployment especially for the younger generation is at a dangerous level, whereas a small number of extremely rich people have been becoming richer. In a sense, it is not only morally desirable and economically viable, but also urgently needed for the sustained survival and development of the free market economy. In this respect, a serious defect of the opponents’ arguments is positing the relationship between the wealth tax and free market economy as a trade-off or mutual contradiction.

Unlike the ideological dogma of extreme neo-liberalists, the founding fathers of the free market economy did not believe that everything should be determined by market competition. Devising a viable way to support and revitalize victims of market competition has been the single most important challenge throughout the history of the capitalist free market economy. For instance, few know that Adam Smith was a professor of ethics, not economics.

Moreover, Smith wrote a masterpiece entitled “On Moral Sentiments” which persuasively argues that moral sentiments, such as compassion and trust are indispensable preconditions for the healthy operation of the free market economy. From the outset, Smith realized that although the market is the very best means to organize the economy and society compared to any alternative, it is still far from perfect. To persist and develop, the market must have effective non-market ways to compensate for various market failures. Otherwise, market competition will eventually kill itself, since the most effective means of defeating one’s competition is to eradicate it. In this regard, it is certainly reasonable and even economically rational that a small number who possess a disproportionately high proportion of society’s wealth help the underprivileged through a wealth tax.

However, special care is needed when drawing a line between taxes for the wealthy and those for corporations. As already discussed, increasing taxes for the extremely rich is worth considering to make the workings of the market healthier by compensating for the market failure of unfair wealth distribution. However, increasing taxes for corporate activities is different. Companies are the most important means for society to create economic value in the market economy. The key problem of the market economy that has brought about the current debate about the wealth tax is distribution, rather than creation, of wealth.

If the underlying logic of the wealth tax is misunderstood and overextended to corporate activities, such as increasing taxes for extremely high-performing companies, the creation of economic value itself can be seriously suppressed. Taxing the extremely rich concerns the distribution of outcomes created by markets, whereas taxing extremely high-performing companies is a distortion of the process of value creation. Nevertheless, this kind of idea to intervene in the process of wealth creation by corporate activities has been actually discussed recently in Korea. Such attempts will end up with the unintended consequence of killing the goose laying the golden eggs. It would be a wiser approach to discuss how to share golden eggs laid by the market, for instance through creative new mechanisms like the wealth tax.
By Shin Dong-youb

Shin Dong-youb is a professor of Yonsei School of Management. ― Ed.


No: Even the DP thought it was a bad idea

“It was so cold this morning that I saw a politician with his hands in his own pockets” is an old joke that still rings true year-round. So it should be no surprise that politicians around the world immediately embraced U.S. billionaire Warren Buffett’s proposal that taxes should be raised “immediately” on the “mega-” and “super-rich.” The so-called “Buffett Tax” also has political fans in South Korea ― not just leftist politicians and academics, but also a group of young lawmakers in the ruling Grand National Party.

Two minority parties (Democratic Labor Party and Democratic Party) flirted with what Reuters called a “populist gesture,” but the larger DP dropped it. Instead of letting a bad idea die, the ruling GNP began talking about ways to implement the Buffett tax. This follows the script that was true in the cases of free medical services, free school lunches and free education. Act I: The most leftist parties propose a populist policy. Act II: The opposition party pushes it. Act III: The ruling party embraces the policy.

As such, the Democratic Labor Party clearly dominates the political agenda in Korea. The GNP, unprincipled and staggering around like a punch-drunk boxer, is desperate to hang on to a popular policy, even one that has been dropped by the Democratic Party.

Proponents claim that the Buffett Tax is a global trend, but it is just as easy to claim the opposite. Wealth taxes were scrapped in The Netherlands and Germany in 1997 after their courts ruled them unconstitutional. Finland (2005) and Sweden (2007) have done the same.

They realized that a wealth tax erodes national competitiveness by discouraging investment and entrepreneurship. It is an old ploy by politicians to try to clean up financial messes they caused by proposing populist policies aimed at unpopular groups.

It would make economic sense for them to cut government spending to restore fiscal health, but what makes good economic sense does not always make good political sense. Politicians around the world take the easy road of raising taxes on the rich with class warfare and envy ― the easy road, politically, but a dead-end economically.

Some supporters insist that the Buffett Tax should be introduced to fix the “imbalance” of the rich allegedly paying lower tax rates. When former president Roh Moo-hyun proposed a tax increase, he promised that those in the top 20 percent income bracket would pay most of the taxes. The top 20 percent pay about 90 percent of income taxes. Is it a fair taxation system to force them to shoulder even more of the tax burden? At what point will politicians keep their hands in their own pockets?

The Swedish experience shows how the Buffett Tax can harm an economy. In the years after the wealth tax was introduced, investors reportedly pulled about 1.5 trillion Krona ($220 billion) worth of investment out of the country. Such a possible capital flight is overlooked by those who claim the limited impact of wealth taxes on the national economy. It shouldn’t be surprising that people who take good care of their money will react in ways to protect their money by investing overseas or shielding their portfolios from taxes. Supporters of wealth taxes act as if people will continue to work and invest as they do now despite tax increases.

Buffett says the rich should pay more in taxes. A few notes about him: One, nothing stops him from paying more. The U.S. government has even set up a website allowing people to contribute more money to fight the government’s debt. Two, Buffett argues in favor of the rich paying more but his firm, Berkshire Hathaway, owes $1 billion in taxes going back to 2002. Three, he argues in favor of the mega-rich giving more money to the government, but he shows his trust in government spending money well by pledging to donate his fortune to the Gates Foundation rather than to the government.

Buffett shows that it isn’t just politicians who have trouble keeping their hands out of the pockets of others, especially when they get hailed as heroes. Politicians are naturally attracted to proposals raising taxes, as fleas are to dogs. It is unfortunate that the ruling GNP has adopted a bad idea that has even been dismissed by one of the leftist parties here in South Korea. Instead of scouring the planet for populist ideas confiscating more wealth from private citizens, it would be better for the GNP to focus its attention on cutting government spending.
By Kwon Hyuk-cheol

Kwon Hyuk-cheol is head of the market economy research team at the Center for Free Enterprise in Seoul. ― Ed.