The Dangun legend for children 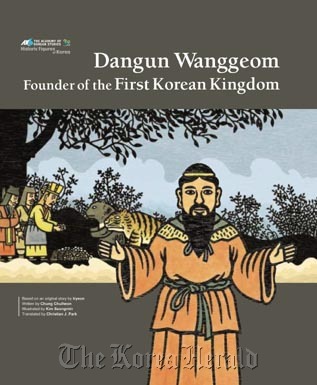 He is said to be the grandson of heaven, and his mother a bear who transformed into a human.

The story of Dangun Wanggeom ― the semi-legendary founder of Gojoseon, Korea’s very first kingdom ― is an entertaining read for anyone of any age even if they have no knowledge of Korean history.

Written and published by the Academy of Korean Studies, this children’s book is in a series dedicated to introducing Korea’s important figures in its history and legends.

The book was written based on a story in “Samgukyusa,” (Memorabilia of the Three Kingdoms), a collection of legends, folktales and historical accounts of Korea’s three kingdom period (Goguryeo, Silla, Baekje), along with the founding of Gojoseon. The text was written by Iryeon (1206-1289), a Buddhist monk during Goryeo Kingdom (918-1392). His book is regarded as the earliest record of Dangun legend.

The legend begins as a tiger and a bear living in what is now the Korean Peninsula, ask Hwanung ― the son of Hwanin, the lord of heaven ― to transform them into humans. Hwanung tells them their wish will come true if the two only eat garlic and sacred mugwort for 100 days while staying in a cave without seeing the sunlight. The impatient tiger gives up after some 20 days, but the bear stays in the cave with much endurance. On the 100th day in the cave, the bear becomes a woman.

After becoming a human, though, the bear-woman (Ungnyeo) was sad that she did not have anyone to marry. She prayed to the heaven that she may at least have a child. Moved by her prayers, Hwanung soon took her as his wife. Ungnyeo soon gave birth to a baby boy, who later became the founder of Korea’s first nation―Dangun Wanggeom. Some scholars have estimated that Dangun founded Gojoseon in 2333 BC, near what is now Pyongyang in North Korea. The Kingdom lasted till 108 BC, being conquered by Han Dynasty China. The three kingdom period followed.

The book is filled with colorful and interesting illustrations, which will draw young readers to the fascinating story. The book is also recommended for those who like to learn Korea’s early history and those who have just started learning the Korean language. It is written in simple sentences, but accurately delivers one of the most significant legends in Korean history.

The series by the Academy of Korean Studies features other famous figures in Korean history, including Suro, the first king of Gaya (42-562), and Jumong, the founder of Goguryeo (37 BC- 667).