Domestic gold prices have rallied to all-time highs on the back of recent surges in international prices of the precious metal and the weak U.S. dollar, industry sources said Friday.

The figure could translate into a pure gold ring of one don, which is a common present for a baby on its first birthday, fetching around 240,000 won, when taxes and other costs are added, the sources said. 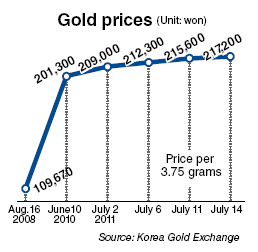 The runaway gold prices are a global trend, as investors move to hold onto safer assets in the face of high uncertainty caused by the escalating sovereign debt crisis in Europe. In addition, the recent fall in value of the U.S. dollar is affecting the price of gold, they said.

“Due to growing uncertainties, investors are flocking to safe assets such as gold,” said Choe Eun-kyu, an official at the Korea Gold Exchange.

Gold for August delivery in New York topped $1,586 an ounce on Thursday, rising to a record for the second straight day, on speculation that debt woes in the U.S. and Europe will escalate.