It is unusual for Korean artists to win so many prizes at a single international music competition. There was no Korean winner in cello. 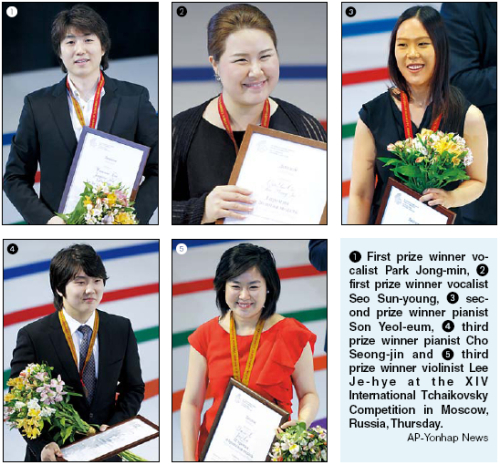 Participants at the awards ceremony applauded enthusiastically in a show of astonishment when a series of Korean names were called as the winners.

Park and Seo were the first Koreans to win a first prize in the competition after baritone Choi Hyun-soo, better known as Hans Choi, won victory in male solo vocal during the 9th competition in 1990.

“I really feel like I am in a dream,” Park told reporters after receiving the prize. “I came to cherish a hope of participating in this competition when I was a high-school student after watching a video clip of my teacher singing in the 1990 competition. But I have never thought that I would succeed him as the winner.”

The international competition, named after Russian composer Pyotr Ilyich Tchaikovsky, is held every four years in Moscow for pianists, violinists, and cellists between 16 and 30 years of age, and singers between 19 and 32 years of age. The first contest was held in 1958.