The government has cut its growth forecast for the economy and raised the outlook for inflation this year, backing off from its ambitious growth plan due to weakening consumption and persistent price hikes.

In a downbeat assessment of Asia’s fourth-largest economy, the Finance Ministry on Thursday said the economy will grow by 4.5 percent this year, down from the 5 percent projected earlier. It said inflation will likely hit 4 percent, upping its forecast from 3 percent after the Consumer Price Index exceeded Seoul’s target range of 2-3 percent for the past five consecutive months. 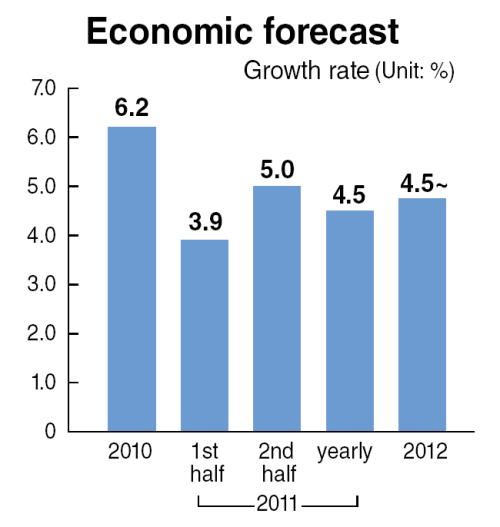 The announcement follows similar adjustments for major economies by the International Monetary Fund and central banks facing sluggish consumption. Seoul’s forecasts are now similar to that of the Bank of Korea’s, which projects growth to hit 4.5 percent under 3.9 percent inflation.

“We expect exports to remain robust with the ongoing recovery of major economies but domestic consumption is seen as weaker for the second half due to volatile trading conditions, especially with regards to oil price hikes,” the ministry said in a statement.

Seoul, however, presented a rosier picture for the job market. About 330,000 new jobs will be created, it said, up from 280,000 earlier projected.

It kept $16 billion of trade surplus outlook for this year, but lowered the figure to $10 billion for 2012 in expectation for more imports with stronger consumer spending.

The ministry said prices would continue to rise for the next few months, especially as Chuseok, a three-day traditional thanksgiving festival on lunar calendar, is approaching.

“Chuseok comes earlier this year, meaning demand for fruits, fisheries and fresh harvests will be widened soon. But we will put all possible policy measures in place to prevent possible price collusion seen as a problem for price volatility,” Yoon Jong-won, head of the Finance Ministry’s economic policy bureau told reporters. Chuseok falls on Sept. 11-13 of the Western calendar this year.

“Prices take time to stabilize once raised, so the CPI would come down to 3 percent level only next year,” Yoon added.

The economy grew 1.3 percent on-quarter in the January-March period, down from an earlier estimate of a 1.4 percent expansion by the BOK. Compared with a year earlier, the economy expanded at the same 4.2 percent pace as earlier forecast.