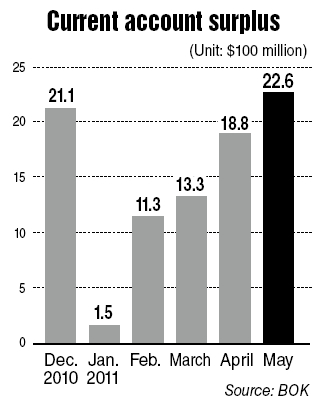 The May surplus was the largest since the $5.11 billion surplus seen in October last year. The current account remained in the black for the 15th straight month in May, powered by exports, which account for about 50 percent of the South Korean economy.

The surplus amounted to a combined $6.15 billion in the January-May period and the central bank forecast the current account surplus will reach $11 billion this year.

The BOK said the country is expected to see the surplus rise for June amid steady exports and the combined surplus may top the bank’s forecast if the current trend remains intact.

“The growth pace of exports slowed down last month, but given the daily average of exports, it should not be interpreted that exports are losing ground,” Yang Jae-ryong, director of the BOK’s monetary and financial statistics division, said at a press conference. “June’s surplus is likely to be similar to the level in May.”

The surplus is widely expected to add further upward pressure on the local currency, which has gained about 4.5 percent to the U.S. dollar since January.

Korea’s goods balance posted a surplus of $1.71 billion in May, down from a revised $3.33 billion in April.

A faltering global recovery, hit by the slowing U.S. economy, is raising concerns that Korea’s overseas shipment might slow down.

Last month, global oil prices retreated as price instability shot up following Osama bin Laden’s death. But the BOK said as a fall in oil prices has not been fully reflected in the costs of last month’s crude imports, the country’s overall import bills remained high.

Korea’s exports to Japan grew 36.5 percent on-year in May, slowing from a 63.2 percent jump in April when Korean firms capitalized on the crippled factory operations in Japan.

“Exports to Japan could be seen as returning to the normal path,” Yang said.

The primary income account, which tracks wages for foreign workers and dividend payments overseas, logged a surplus of $517.3 million last month, compared with a deficit of $1.58 billion in April.

The turnaround came in March and April when offshore investors usually repatriate dividend payments of Korean companies that close their books in December, sapping the country’s income account balance.

The service account, which includes outlays by Koreans on overseas trips, posted a surplus of $15.5 million last month, a turnaround from a shortfall of $178.8 million in April.

Meanwhile, the capital and financial account, covering cross-border investments, posted a net outflow of $4.03 billion in May, compared with a net inflow of $394.7 million the previous month, according to the BOK.

Last month, portfolio investments, including stock and bond investments, logged a net outflow of $1.14 billion, a turnaround from a net inflow of $4.58 billion in April, due to foreign investors’ sell-offs of local stocks.