The black garlic flavored chicken has been on sale since Thursday at the retailer’s 88 stores across the country at a price 2,000 won cheaper than its earlier chicken release in December.

As sales of its earlier product, dubbed ultra cheap chicken, were stopped after less than a week due to political pressure and outcry from small vendors, the country’s second-largest retailer is feeling the heat again about its new bargain product. 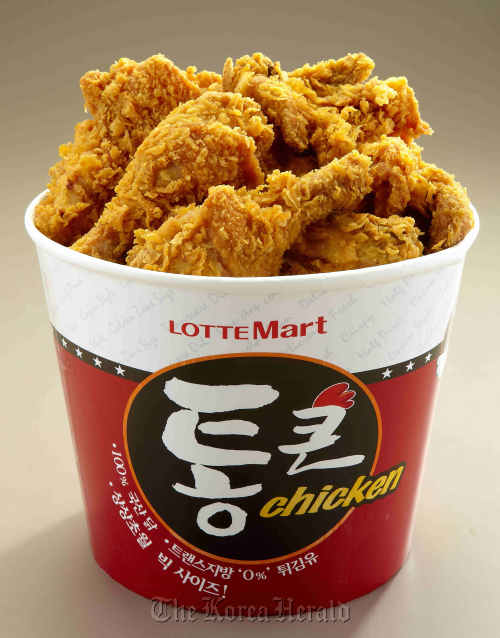 As they did for super-cheap chicken in December, customers lined up to take advantage of the bargain deal.

“I heard the cheap chicken came back and waited for an hour to buy the chicken. I know the store is trying to attract customers using this chicken but I’m here just for chicken, and think it’s worth the wait,” a Lotte Mart customer said.

Lotte Mart’s chicken, priced about 40-60 percent cheaper than ones sold at mom and pop stores, is at the center of debate about to what extent consumer’s rights should be protected and smaller businesses be allowed to grow in a capitalist society.

The Korea Franchise Association, representing the chicken businesses, in December staged a public outcry against the launch but cancelled the complaint it was going to make against Lotte after the retailer stopped sale of the chicken.

The short-lived chicken also brought the Fair Trade Commission to investigate the chicken industry for their alleged price-fixing practices.