Inflation in April slowed to 4.2 percent on-year, down from a 29-month high of 4.7 percent a month earlier on Seoul’s price controls and lower fresh food prices, a government report said Monday. 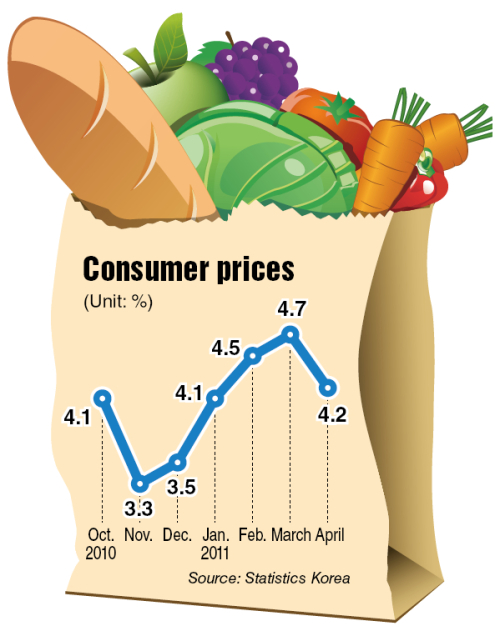 The figure still exceeded the Bank of Korea’s inflation target of 2 to 4 percent for the fourth consecutive month but was slower than the 4.3 to 4.6 percent on-year figures economists at newswires had expected.

“Inflation was still high but the rate of growth slowed in April. Fresh food prices fell quite a bit and played a major role in bringing down the figure,” Yang Dong-hee, head of the price statistics division at Statistics Korea.

“Although the 100 won cut per liter didn’t bring down the sales price of fuel much, it managed to absorb oil cost surge by 1.6 percent,” Yang said.

Fresh food prices rose 7.7 percent from a year earlier, posting a single-digit figure for the first time in 11 months. It is down 3.8 percent from a month earlier.

Prices of farm produce and livestock fell 3 percent and 0.8 percent each, while fisheries increased 1.2 percent.

The Consumer Price Index was unchanged from March.

The Lee Myung-bak administration in January declared “a war against inflation” after rising consumer prices led by food and fuel costs alarmed policymakers. The Fair Trade Commission and the Finance Ministry have been pressuring oil refiners, food manufacturers and the telecommunications industry to absorb import costs surges. Since January, public utility costs have been held down and tariffs has been cut for staple food including pork and orange juice.

The government has been retaining its 5 percent growth target with CPI to remain in the 3 percent range. Economists widely expect Seoul to adjust the figures as inflationary pressure persists on surging energy costs.