Their financing opportunities, such as issuing commercial papers or corporate bonds, are increasingly becoming difficult after industry leaders such as Chinhung International and LIG Engineering & Construction this year were forced into a workout program and court receivership, respectively.

Their loans are under intense pressure for repayment from mutual savings banks but most of the lenders have turned away from extending loans to builders without additional collateral. Making fresh loans is a viable option at this stage as interest rate for builders with credit ratings below B have exceeded 15 percent in the market.

Project finance usually involves long-term real estate developments such as the rebuilding of apartments or shopping malls. The debt on the project is paid back to lenders from the profit generated on completion, making it a risky business as the chances of loans going sour depend on the profitability of the project.

The case of Sambu Construction, the industry’s No. 34 in building, entering court receivership this week set off alarm bells to other builders rated B or below. Sambu, known for its large public works, has over 906 billion won ($835 million) of debt exposure from its construction projects. It asked for a roll over on 450 billion won of loans on Tuesday but creditors refused to do so unless the existing debt could be collateralized.
“The creditors asked for collaterals on not only Sambu’s debt also on that of Tongyang Construction our business partner. We entered court receivership because we thought taking such an option would be detrimental to our fiscal balance,” an official at the Sambu said.

Since 2008, 25 of the 100 biggest construction firms were forced into workout programs or into a pre-workout program, a debt-managing program funded by creditors for debtors with a higher chance of normalization.

The current woes have stemmed from a sluggish property market and saving banks’ reckless loans to contractors.

Savings banks are under an industry-wide restructuring program after a large portion of their project finance loans went sour since the onset of the 2008 financial crisis. 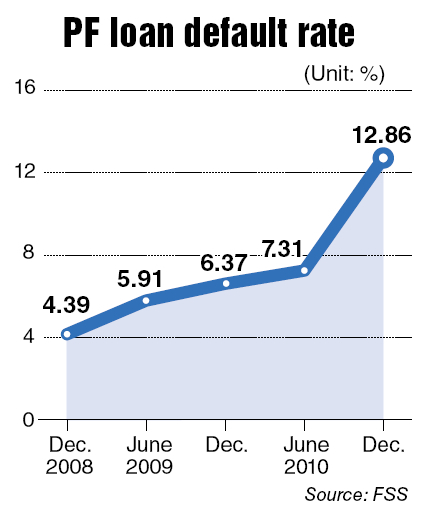