By 박한나
Published : Mar 21, 2011 - 19:01       Updated : Mar 21, 2011 - 19:01
WASHINGTON (AP) ― The U.S. on Sunday claimed initial success two days into an assault on Libya that included some of the heaviest firepower in the American arsenal ― long-range bombers designed for the Cold War ― but American officials said Sunday it was too early to define the international military campaign’s endgame.

The top U.S. military officer suggested that Libyan strongman Moammar Gadhafi might stay in power in spite of the military assault aimed at protecting civilians, calling into question the larger objective of an end to Gadhafi’s erratic 42-year rule. Other top U.S. officials have suggested that a weakened and isolated Gadhafi could be ripe for a coup.

Defense Secretary Robert Gates said the U.S. expects to turn control of the mission over to a coalition ― probably headed either by the French and British or by NATO ― “in a matter of days.”

Late Sunday, however, NATO’s top decision-making body failed to agree on a plan to enforce the no-fly zone over Libya, although it did approve a military plan to implement a U.N. arms embargo.

At the Pentagon, Navy Vice Adm. William E. Gortney, staff director for the Joint Chiefs of Staff, told a news conference that the back-to-back assaults Saturday and Sunday had inflicted heavy damage. They largely silenced Gadhafi’s air defenses, blunted his army’s drive on the rebel stronghold of Benghazi and confused his forces.

“We judge these strikes to have been very effective in significantly degrading the regime’s air defense capability,” Gortney said. “We believe his forces are under significant stress and suffering from both isolation and a good deal of confusion.” 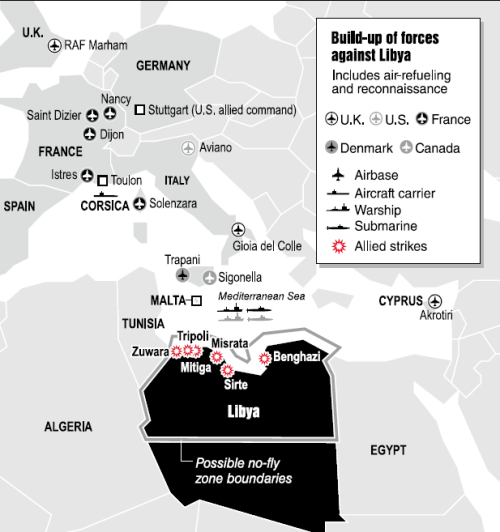 Gortney’s assessment suggested that further strikes on the scale of Saturday’s heavy assault with sea-launched Tomahawk cruise missiles may not be needed, although he did not rule out further attacks.

Inside Gadhafi’s huge Tripoli compound, an administration building was hit and badly damaged late Sunday. An Associated Press photographer at the scene said half of the round, three-story building was knocked down, smoke was rising from it and pieces of a cruise missile were scattered around the scene.

Sunday’s attacks, carried out by a range of U.S. aircraft ― including Air Force B-2 stealth bombers as well as Marine Harrier jets flying from an amphibious assault ship in the Mediterranean ― demonstrated the predominance of U.S. firepower in the international coalition. By striking Libyan ground forces, coalition forces also showed that they are going beyond the most frequently discussed goal of establishing a no-fly zone over the country.
A military official said the B-2s flew 25 hours in a round trip from Whiteman Air Force Base in Missouri and dropped 907-kilogram bombs.

U.S. missiles and warplanes were clearly in the lead Saturday and Sunday, but Gates said the plan remains for the U.S. to step back once the threat from the Libyan military is reduced.

Obama also called King Abdullah of Jordan on Sunday to emphasize the importance of a broad international effort in the Libyan campaign and to discuss the unrest in Bahrain, said national security adviser Tom Donilon.

Obama referred to Libya but did not discuss the unfolding operation during remarks in Brazil.

“We’ve seen the people of Libya take a courageous stand against a regime determined to brutalize its own citizens,” Obama said.

“No one can say for certain how this change will end, but I do know that change is not something that we should fear. When young people insist that the currents of history are on the move, the burdens of the past can be washed away.”

House Speaker John Boehner said in a statement Sunday that while the U.S. has an obligation to support the Libyan people, the Obama administration must do a better job of communicating to Americans and to Congress what the U.S. mission in Libya is and how it will be achieved before further military commitments are made.

Donilon, responding from Brazil, said, “I think that’s a fair request of the administration, frankly, and we are doing that.”

Adm. Mike Mullen, chairman of the Joint Chiefs of Staff, was pressed repeatedly during a round of Sunday television interviews to explain the mission’s objectives. He said the main goal is to protect civilians from further violence by pro-Gadhafi forces, while enabling the flow of humanitarian relief supplies. He said the first step ― imposing a no-fly zone ― had been achieved, with little worry of Gadhafi shooting down allied patrols. But it was unclear how long the military effort would go on, or on what scale.

“I think circumstances will drive where this goes in the future,” the admiral said on ABC’s “This Week.” “I wouldn’t speculate in terms of length at this particular point in time.” He said early results were highly encouraging, with no known U.S. or allied losses and no reported civilian casualties.

“We’re very focused on the limited objectives that the president has given us and actually the international coalition has given us,” Mullen added.

Asked whether it was possible that the military goals might be met without Gadhafi being ousted, Mullen replied, “That’s certainly potentially one outcome.” He described the Libyan strongman as more isolated than ever, adding that Gadhafi is “going to have to make some choices about his own future” at some point.

The prospect of Gadhafi remaining in control of at least a portion of the country raises questions about how far the Obama administration and its European and other partners are willing to go with military force. Clinton said Saturday that although ousting Gadhafi is not an explicit goal of the campaign, his departure might be hastened as the conflict continues. Gadhafi has ruled Libya for more than 40 years.

Clinton said enforcement of the U.N. Security Council resolution that called on Gadhafi to cease firing on his own people will “make a new environment” in which people close to Gadhafi might turn against him.

“The opposition is largely led by those who defected from the Gadhafi regime or who formerly served it, and it is certainly to be wished for that there will be even more such defections, that people will put the future of Libya and the interests of the Libyan people above their service to Col. Gadhafi,” she said.

If the ultimate outcome of the military campaign is cloudy, so is the command arrangement. The Pentagon said Saturday that it is led by Ham, who as head of U.S. African Command is responsible for U.S.

military operations in Libya and much of the rest of the continent.

Beyond Gates’ remarks Sunday, officials have not said much about the plan to hand off responsibility for the military operation, dubbed Odyssey Dawn.

Libya’s claims of civilians among the dead from the strikes appeared to make Arab countries nervous, after the Arab League took the unprecedented step of calling for a no-fly zone. On Sunday, Arab League chief Amr Moussa criticized the missile strikes, saying they went beyond what the Arab body had supported.

“What happened differs from the no-fly zone objectives,” Moussa told reporters in Cairo. “What we want is civilians’ protection, not shelling more civilians.”

One of the more vocal skeptics in Congress, Sen. Richard Lugar, said he worries that the U.S. may have entered a conflict with unclear goals.

“We really have not discovered who it is in Libya that we are trying to support,” the Indiana Republican said on CBS’ “Face the Nation.” “Obviously the people that are against Gadhafi, but who?

In eastern Libya, for example, a huge number of people went off to help the Iraqis against the United States in a war that still is winding down.”

Asked about working with the rebels, and whether the coalition knows enough about them to forge a partnership, Gates said Libyans must ultimately resolve matters themselves.

Still, he added, “We certainly know a lot about Gadhafi, and that’s good enough for me.”