According to the report by the Organization for Economic Cooperation and Development, Korea’s household savings rate ― the ratio of savings to total disposable income ― stood at 2.8 percent last year. 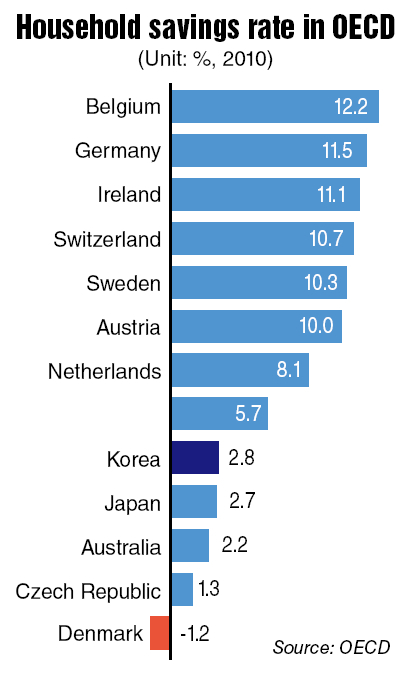 It is far below the OECD average of 6.1 percent, which is based on related data from 20 member nations, the report showed.

Korea had the fifth-lowest savings rate after Denmark with minus 1.2 percent, the Czech Republic with 1.3 percent, Australia with 2.2 percent and Japan with 2.7 percent, respectively. It was also lower than the U.S.’s 5.7 percent.

Koreans had long been known for their passion for saving.

The nation’s savings rate stood at 24 percent in 1987, the highest among OECD countries, and retained the top spot for 13 years. In 1988, the country posted a record high 25.9 percent.

But the figure plunged to 0.4 percent in 2002 when the nation was in the midst of a credit card crisis before rising to 9.2 percent in 2004. It had stayed in the 2-3 percent range in recent years.

Sluggish income growth amid the economic slowdown, increased livelihood expenses and protracted low interest rates discouraged households from keeping their money in bank accounts, causing the savings rate last year to remain among the lowest in the OECD, experts said.