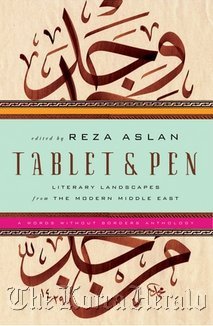 The West’s perception of the Middle East as mysterious, exotic and savage has changed little since the days of Napoleon more than 200 years ago.

The new anthology “Tablet & Pen: Literary Landscapes From the Modern Middle East,” edited by University of California, Riverside creative writing professor Reza Aslan, aims “to provide a different, more authentic perception of this rich and complex region, an image not fashioned by the descriptions of invaders, but rather one that arises from the diverse literatures of its most acclaimed poets and writers.”

The collection showcases many literary giants but also introduces readers to lesser-known talent from the region. An impressive variety of short stories, poems and essays have been translated ― many for the first time ― from Arabic, Turkish, Persian and Urdu.

An excerpt from Aziz Nesin’s memoir “Istanbul Boy” transports the reader to a time when a woman would recruit a neighborhood boy to rock her baby’s hammock while she cooked. Mohammad Ali Jamalzadeh’s beautifully written short story “Persian Is Sugar” highlights the diversity of his people through the characters of cellmates in a makeshift jail. The partition of India and creation of Pakistan is thoroughly humanized in the nail-biting “The First Morning” by Intizaar Hussein.

Palestinian writer Ghassan Kanafani pens a heartrending letter to a friend awaiting him in California in “Letter From Gaza.” He recalls returning home on vacation after working abroad: “This Gaza was more cramped than the mind of a sleeper in the throes of a fearful nightmare, with its narrow streets that had their peculiar smell, the smell of defeat and poverty.” And yet, Kanafani says he cannot leave it and its people behind.

In his introduction to the book, Aslan writes that the anthology is not to be “tasted in disparate bits” but rather consumed as a whole to appreciate the sustained narrative. Perhaps this is true for students of literature who divine greater meaning from the passages, but for the average reader, such a requirement seems unnecessary. Not every author featured will resonate with every reader, but “Tablet & Pen” is sweeping enough ― in style, content, form ― to at least partially satisfy all. (AP)