The yearly sales reached 153.7 trillion won, but the operating profit for the last quarter of 2010 for Samsung fell below market estimates mainly due to the price drops in memory chips and LCD panels from October to December. 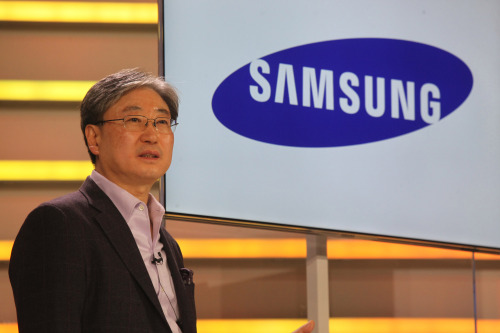 The company is the world’s biggest manufacturer of memory chips and liquid-crystal display panels, and the world’s second-largest handset maker.

In the regulatory filing, Samsung said its fourth-quarter operating profit was down 12.7 percent from 3.4 trillion won recorded during the same period last year.

However, when looking at the overall picture for 2010, the company’s operating profit for the year increased 58.1 percent from 10.9 trillion won in 2009.

“We were able to record the largest profit figure last year since the founding of the company due to the significant growth of the semiconductor and LCD sectors and by leading the 3-D television and smartphone markets,” the company’s vice chairman Choi Gee-sung told reporters during a press conference held in Las Vegas on the sidelines of the Consumer Electronics Show.

“In the next few years, we plan to become the first global electronics firm which records yearly sales of $200 billion,” he said. 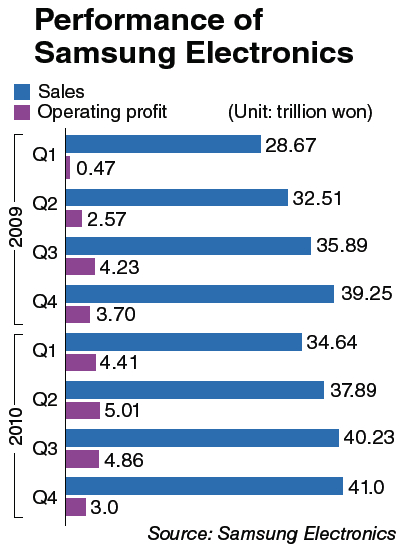 Although the global electronics giant maintained a positive outlook over its profit figure, analysts expressed disappointment that it did not meet market expectations.

Samsung is projected to post an operating income of 3.3 trillion won in the fourth quarter.

Shortly after the flagship unit of Samsung posted its earnings report, the share price went down 1.08 percent in the Friday session compared to a day earlier, trading at 920,000 won, as many foreign investors sold their stocks.

Analysts at LIG Investment & Securities Co. said that the slowdowns in sales of personal computers negatively impacted the prices of dynamic random access memory, or DRAM, used for reading and writing data on PCs.

They also said that the TV business was most likely to post a bigger loss for spending more money on marketing to reduce year-end inventories.

Analysts, however, said the first quarter earnings are likely to see a rising streak, especially with the boost in the company’s mobile and telecommunications businesses.

“It seems as if the market’s expectation that Samsung will record a low profit for the last quarter of 2010 has already been reflected in its stock price,” said Shin Hyun-joon, an analyst at Tongyang Securities. “However, I believe that it will give a positive impact in the future for it is likely to increase the market expectation for the first quarter of this year.”