According to an analysis by the National Tax Services released Tuesday, the amount of beer consumed in 2009 exceeded 2 billion liters, up from about 1.6 billion liters in 1999. Over the course of a year, this translates as a 500-milliliter beer at least once every three days for every adult in the country.

The biggest increases were seen in the consumption of wine and whiskey. The amount of wine consumption last year reached nearly 46 million liters, more than six times 1999’s figure of 6.4 million liters. Since 2006, imports of wine have surpassed those of whiskey.

Among Korean traditional drinks, a rice wine named makgeolli has gained popularity, thanks to the “makgeolli boom” sweeping the nation recently. 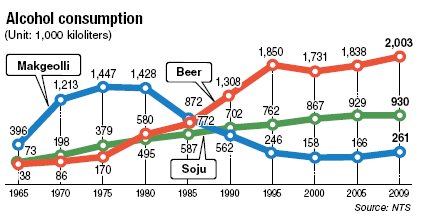 However, makgeolli has made a big comeback with 261,000 kiloliters of consumption in 2009, up nearly 48 percent from a year earlier.

Meanwhile, soju saw some fluctuation in its consumption. In 2009, Koreans enjoyed nearly 930 million liters of soju. That figure is 1.5 percent down from about 945 million liters a decade earlier, but up nearly 20 percent compared to 780 million liters in 2001.

Consumption of cheongju and yakju, clear rice wines, has fallen more than 50 percent over the past few years, to about 20.8 million liters and 22 million liters respectively in 2009.

“As standards of living are climbing along with the well-being trend, consumption of traditional liquors that used to be popular is going down, while more Koreans enjoy high-quality drinks such as wine and whisky,” an official said.