By Shim Woo-hyun
Published : Mar 1, 2020 - 15:30       Updated : Mar 1, 2020 - 15:54
While South Korean broadcasters and mobile carriers are scrambling to roll out new over-the-top services -- pledging to invest in exclusive contents -- it is uncertain whether they can compete with foreign service providers who are dominating the market.

The online streaming services -- replacing traditional cable or satellite TV networks -- took off relatively late here compared to the US where user demand is high.

But the demand has been rising, coupled with hyperconnected internet that enables seamless watching experience, according to industry sources.

OTT bundling partnerships by mobile carriers too is rising as they seek to entice their subscribers.

The LG Uplus-Netflix partnership in 2018 was the first such bundled product here.

CJ ENM also operates Tving, which will be renewed in cooperation with broadcaster JTBC this year.

Among the foreign players, YouTube is by far the largest platform in terms of the number of users. Netflix has marked exponential growth since it was introduced here in 2016. Disney Plus is expected to increase the competition by entering Korea this year.

According to the Korea Communications Commission’s latest survey on 6,375 people, YouTube had the highest number of paying subscribers, accounting for 8.1 percent. Netflix and Pooq (now Wavve) followed with 3.4 percent and 2 percent, respectively. 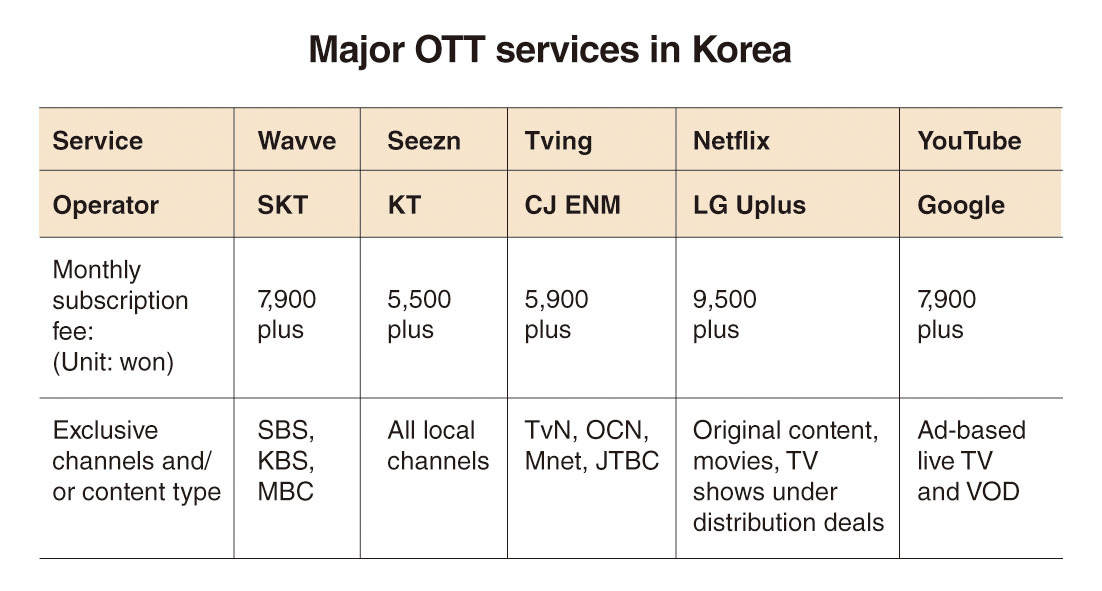 One of the main issues that Korean OTT platforms currently have is their heavy reliance on local TV productions, according to an expert.

“Korea’s new OTT platforms currently do not have significant differences when compared to their previous cord-cutter models. They still focus on live streaming of broadcasting channels or video-on-demand services,” said Chung Yong-woo, researcher at the Korea Radio Promotion Association.

The business model that feeds on TV productions comes with risks because larger overseas platforms can always ramp up investments in the local market and blow away the competition.

“According to latest reports, YouTube is considering providing productions by third-party streaming services, like Apple TV. If it starts providing live and video streaming of local TV productions, it will hamper the operations of local OTT platforms,” Chung said.

Some of Korean OTT service providers have taken initiatives to create their own original contents, although their competitiveness is yet to be proven.

SKT last year pledged to invest some 300 billion won ($250 million) over next five years, upon launching Wavve by merging two exiting services: Pooq and Oksusu. Its investment is so far the largest among local OTT service providers.

But, the company’s investment plan will be limited to the local market at least for now. It has announced that it will first inject some 200 billion won for local TV productions, while securing streaming rights for foreign services of international providers that are popular. The company added that it will seek overseas opportunities later.

KT’s Seezn, which used to be one of the biggest players in the IPTV market, already has 70 original titles on its own platform which accounts for some 1,000 watch hours. However, it is slow with future plans for expansion. The company said that it is yet to develop detailed plans and will continue to periodically invest in titles.

Korea for the time being is minuscule compared to the international market.

CJ ENM -- the operator of local OTT platform Tving and the studio behind the multiple Academy Award-winning “Parasite” -- has been making more tangible outcomes in regards to foreign expansion.

On Feb. 12, it announced its investment in US-based production firm Skydance Media, while signing a local studio specializing in special effects.

In November, CJ Entertainment and its TV series production unit Studio Dragon also signed a strategic partnership with Netflix, through which the US-based OTT giant purchased 4.99 percent shares and received the distribution rights for some 20 titles. Local reports previously said the price of distribution rights of TV series “Arthdal Chronicles” by Studio Dragon -- a separate deal -- reached around 25-30 billion won.

CJ ENM is also currently looking at building its new production studio in the US. The financial details or timeline, however, have not been revealed.

Meanwhile, CJ ENM has decided that it will partner with broadcasting firm JTBC, while withdrawing all its productions from other OTT platforms.

“CJ ENM’s move signals its strong will to compete with its own contents. It is also true that the company is leading the K-wave in global markets, backed by its K-pop channel and drama channel TvN,” Chung said.

In terms of drama series, five productions by CJ ENM and JTBC ranked in the top 10 between Jan. 27 and Feb 2, according to CJ ENM’s index that calculates popularity of TV productions based on related online posts, number of views and online searches, among others.

Another report released by the KCC on Feb. 19 also showed that the sales of CJ channels on TV accounted for 20.1 percent market share with 210.1 billion won, topping other rivals.