According to data compiled by the Bank for International Settlements, Seoul’s household debt accounted for 96 percent of the GDP at the end of the second quarter in 2018, up 2.4 percentage points from the previous year.

The household debt-to-GDP ratio itself at the end of the quarter was 7th highest among the subject nations. The corresponding figures for Switzerland, Australia, and Denmark all exceeded 100 percent, which placed them in the top three in order.

The government’s efforts to restrain household debt -- through tightened lending rules and the Bank of Korea’s recent decision to raise the key rate -- have helped slow the increase in household debt. However, the data indicates that the rate of debt growth has outpaced economic growth in comparison to other economies.

“It’s true that the current administration has slowed the gains of household debt -- with the government setting a goal of not letting it exceed an annual growth of 8 percent -- but the data is one of many indications that it needs to turn its focus on reducing demand,” Choi Bae-geun, a professor of economics at Konkuk University in Seoul said.

The burden of repayment for South Koreans has increased as well, with the debt service ratio of household borrowers reaching a new-high of 12.4 percent in the second quarter. 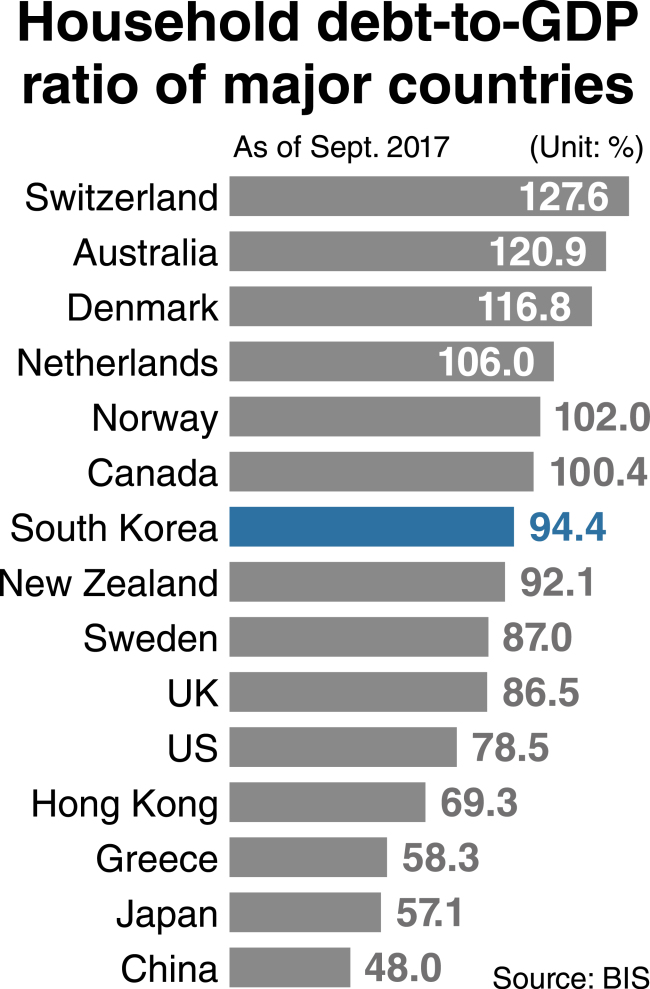 “It’s bad for the economy overall, because even those capable of repaying their debts must cut back on their overall spending.”

Korea’s household debt reached a record high in the third quarter last year, standing at 1,514.4 trillion won ($1.3 trillion), according to the BOK. The figure was up 22 trillion won or 1.5 percent from the previous quarter, surpassing the 1,500 trillion-won level for the first time.