The following is the second and last of a two-part series on major presidential candidates’ stances on security and diplomatic issues confronting South Korea. -- Ed.

With persistent controversy over the shutdown of an inter-Korean factory complex, most of the top five presidential candidates remain resistant to its immediate reopening without tackling North Korea’s nuclear and missile programs.

The Kaesong industrial park was closed in February 2016 as part of the Park Geun-hye government’s response to Pyongyang’s fourth nuclear test and a long-range ballistic missile launch. The park has long been subject to heated debate, especially over whether it would constitute a breach of international sanctions banning the transfer of “bulk cash.”

Advocates stress its public diplomacy effect in exposing rank-and-file North Koreans to a far more affluent, democratic South, while skeptics brand it as a rare financial source for the cash-strapped Kim Jong-un regime.

Meanwhile, all the candidates have also pledged to renegotiate a December 2015 settlement on the wartime sex slavery dispute with Japan.

The accord brought a turnaround in the checkered relationship between the old foes following years of bitter spats. But it instantly sparked heated backlash from the public and opposition parties due to the government’s failure to consult in advance with the victims and a controversial clause that implies the removal of a girl statue set up in front of the Japanese Embassy here to honor the women.


After serving more than a decade as a totem of inter-Korean rapprochement, the Kaesong industrial park is in danger of fading into history, as Pyongyang seems to offer little hope that it will change course and desert its nuclear program.

Of the five major contenders, Yoo Seong-min of the conservative Bareun Party and Hong Joon-pyo of the far-right Liberty Korea Party have rejected restarting the complex unless the North Korean nuclear threats are removed.

Opposition front-runners -- Moon Jae-in of the progressive Democratic Party of Korea and Ahn Cheol-soo of the center-left People’s Party -- initially vowed to reopen the district, but have recently turned more negative toward it.

In March, Ahn called for the North to shift its attitude as a prerequisite to resumption. In February, Moon said he wanted to reopen it right away and gradually expand it to a 66 million-square-meter area, but he signaled a change of course in an interview with the Chosun Ilbo daily Monday. “If Pyongyang presses ahead with its sixth nuclear test, inter-Korean dialogue would be implausible for a considerable amount of period, along with a restart of the Kaesong complex and tour to Geumgangsan resort in the North,” he said.

The far-left Justice Party’s flag-bearer Sim Sang-jeung, meanwhile, plainly supports the complex’s resumption. In a press interview on March 31, she said if elected she would expand the park and push for the construction of a trans-Korea railway and gas pipeline by building trust between the two Koreas.

With Moon and Ahn growing more skeptical about the project, the other competitors attacked them for doing an about-face during a five-way televised debate Thursday.

Yoo and Sim accused Ahn of flip-flopping on Kaesong and other security issues in a bid to entice conservative voters in the face of spiraling tension on the peninsula. Ahn, in response, said he had changed his position to be more “flexible” to adapt to what he called the rapidly evolving security landscape.

“We’re currently under the situation where we’re ramping up sanctions (against North Korea), and we could not be free from that ourselves,” Ahn said, when asked by Yoo on the district’s revival.

“My position is that we could discuss related issues en bloc after we create a negotiating table when we want and under the conditions we need.”


The 2015 agreement remains a source of heated public debate and diplomatic spats with Japan due chiefly to the clause on the euphemistically named “comfort women” statues.

Tokyo has been protesting a new memorial set up by civic groups in December in front of the Japanese consulate-general in Busan, saying it runs counter to the accord that says it will work to “properly resolve” the statue issue via consultations with related organizations. In January, Japan recalled its Ambassador to Seoul Yasumasa Nagamine and Busan Consul-General Yasuhiro Morimoto, only to return them last week, and declared a moratorium in negotiations over a bilateral currency swap deal designed to stabilize the Korean currency in a time of financial crisis.

All five candidates have voiced criticism for the deal, vowing to renegotiate it with Tokyo.

In an interview with The Korea Herald on Monday, Moon said the settlement is “wrong” in terms of both the content and process in the run-up to the announcement. “It’s unacceptable. In line with the view of the majority of the people, it must be renegotiated.”

Ahn has lashed out at the Park Geun-hye government for its failure to discuss the terms with the sex slavery survivors, and said if elected he would “fix” it in a way that addresses the victims’ demands.

“The deal is the result of the state’s unilateral action without any communications with the victims,” he said at a seminar last week.

Hong said the accord is a “declaration” between the two countries, not a treaty, and thus it is possible nullify it, while Yoo said he would abolish it if Tokyo refuses a renegotiation. Sim has also argued the agreement is “invalid,” calling for an amendment.


Five candidates and their stances on four major issues 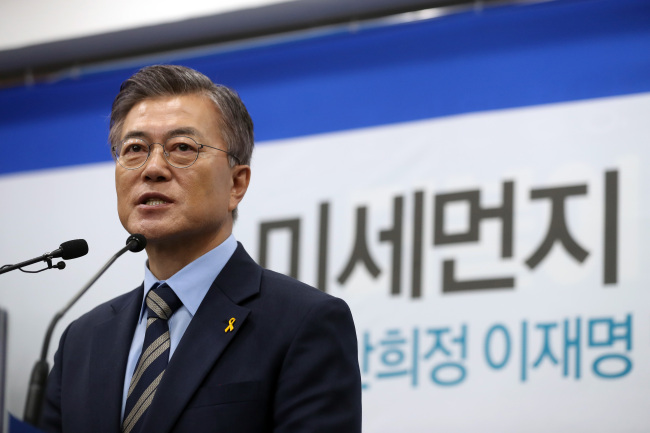 “The issue of THAAD deployment will be resolved first if I take power.” (Interview with The Korea Herald on April 10)

“It goes against the principle of denuclearization of the Korean Peninsula. If we deploy tactical nuclear weapons, we are deconstructing our most important justification for demanding North Korea to denuclearize.” (Interview with The Korea Herald)

“If North Korea conducts another nuclear test, inter-Korean talks will be suspended for a considerable amount of time. In that case, we cannot just reopen Kaesong complex.” (Chosun Ilbo interview)

“If we achieve a change of the government, we will expand the complex.” (On his Facebook page on Feb. 10, one year after the complex was shut down)

“The issue of ‘comfort women,’ both the agreement and the negotiation process, were wrong. It must be renegotiated.” (Interview with The Korea Herald) 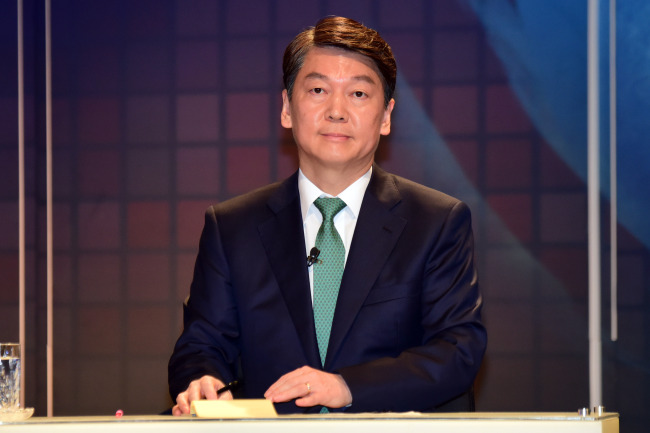 “I will try to talk our party members out of the objection to the THAAD deployment.” (Interview with Chosun Ilbo on April 10)

“It would be abandoning our attempt to denuclearize the Korean Peninsula. It could also lead to the acknowledgement of North Korea’s nuclear weapon.” (Meeting with press on April 6)

“We cannot simply reopen Kaesong complex unless there is the right condition for it.“ (During a press conference on April 5) 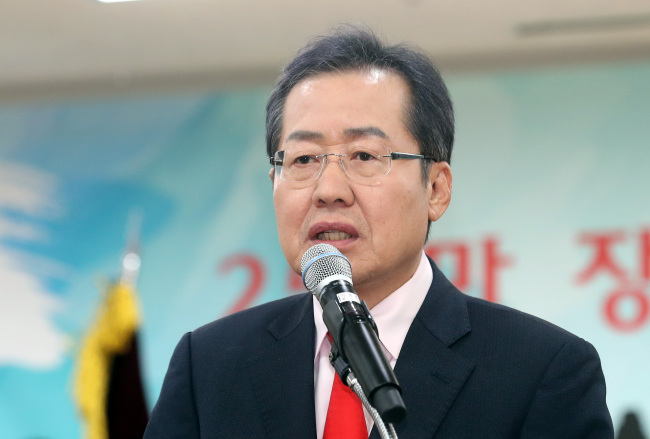 “THAAD deployment alone is not enough to protect South Korea against North Korean missiles.” (On campaign trail on April 10)

“We should achieve a nuclear balance with the North by deploying US tactical nuclear weapons. It is time for us to be more offensive against the North.” (Meeting with press on April 10)

“The agreement is a two-nation deal, not an international agreement. Therefore, I think we can annul it. (Attending the funeral of a former Japanese sex slave on April 4) 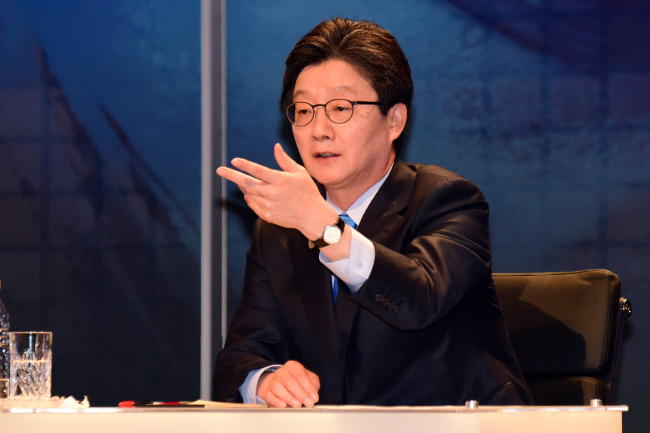 “Prompt deployment of THAAD is the way to eliminate uncertainties. The quicker we install it, the shorter the Chinese retaliation will last.” (Interview with The Korea Herald in March)

“Under the current US extended deterrence strategy, we don’t know exactly how long it would take for US nuclear bombers to arrive here. If we have tactical nuclear weapons, we can equip them with our missiles and use them for offensive purposes. It could definitely deter North Korea.” (Interview with The Korea Herald)

“Reopening Kaesong complex is impossible right now. Reopening is possible only when there is no more North Korea nuclear threat. (During a party meeting on April 4)

“I will renegotiate the deal. If Japan doesn’t respond, I will seek to cancel it.” (During a party meeting on April 2) 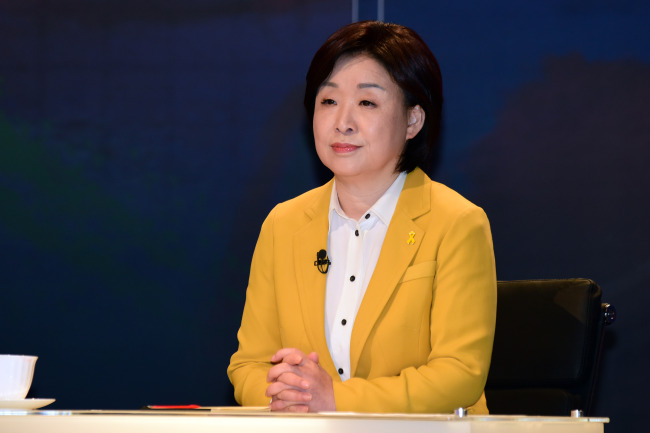 “If I become president, we will conduct a review of the THAAD deployment and have it go through parliamentary approval process” (On campaign trail on April 7)

“Deployment of US tactical nuclear weapon will destabilize the security status in Northeast Asia.” (During a party meeting in March)

“We should reopen Kaesong complex promptly. Through a trust-building process between the two Koreas, we should create a new breakthrough in economic cooperation with the North.” (During a media interview in March)

“The agreement is null and void. We must renegotiate it promptly.” (Meeting former comfort women on March 1)