The number of foreigners who watch Naver Corp.'s webtoons has surpassed that of Koreans for the first time, according to the search engine on Tuesday, illustrating the growing popularity of the web comics among foreigners.

Naver began publishing its web comics overseas in 2014 via Line Corp., a Japan-based mobile messaging subsidiary of Naver. Line's webtoons are being offered in five languages, including English, Chinese and Indonesian. 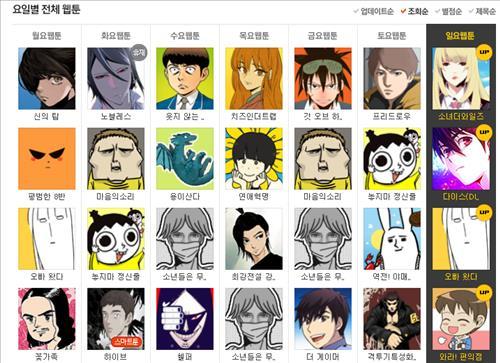 So far, Line's webtoons have reported about 5.1 billion reads.

"It is generally believed that the global expansion of webtoons is not easy compared with other social network services. We've attained this feat in just two years," a Naver official said.

He noted the number of Naver's webtoon artists surged from a mere four to 127 now and they have run or are running a total of 197 works so far.

Naver has focused its webtoon service in Asian markets, where the Line messaging app is popular.

However, Naver officials have suggested that they may expand the webtoon service in the United States and Europe.

Kim Jun-koo, head of Naver's webtoon division, said, "The growth potential of webtoons in a global market is huge because it is a new digital content." (Yonhap)