The leaders of the ruling Saenuri Party resigned en masse Thursday in the wake of its crushing defeat in the parliamentary election the day before, which deprived the conservatives of a legislative majority status and threatened to undermine President Park Geun-hye’s mandate.

Party chairman Kim Moo-sung and other leaders offered to step down early in the morning taking responsibility for factional fighting and nomination debacle blamed for its unexpected setback.

Late at night they decided to launch an emergency leadership committee and picked floor leader Won Yoo-chul as interim chief.

They also decided to accept all former members who, denied nomination, left the party and won the election as independent candidates. The seven defectors include former floor leader Yoo Seung-min who scored a landslide victory in Daegu. If they return, the party would recover its status as the largest group in the National Assembly.

“I hereby take all responsibility for the election defeat and resign from party chairmanship as of today,” Kim said at the disbanding ceremony of the party’s election strategy team.

“The party humbly accepts the people’s strict judgment over our infighting and division,” he added.

The general election opened a three-party political framework by downsizing the ruling party and expanding two opposition parties in the parliament.

The Saenuri was not only booted from majority status but also tumbled down to second-rank party, giving way to The Minjoo Party of Korea. 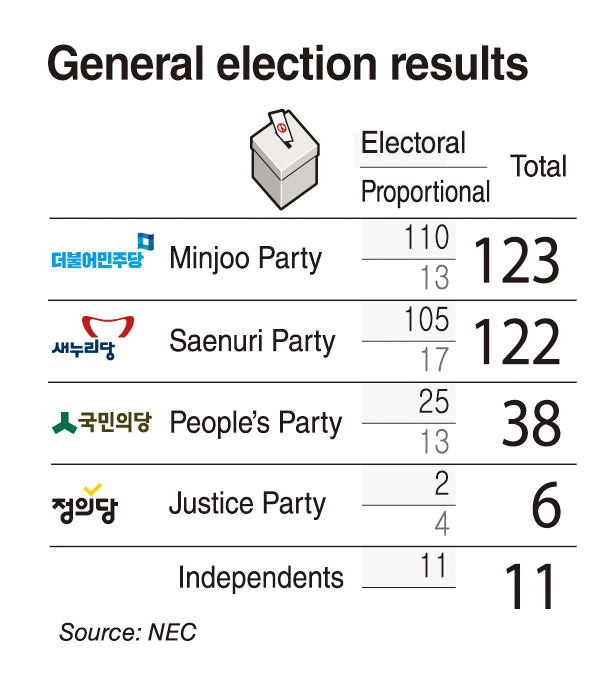 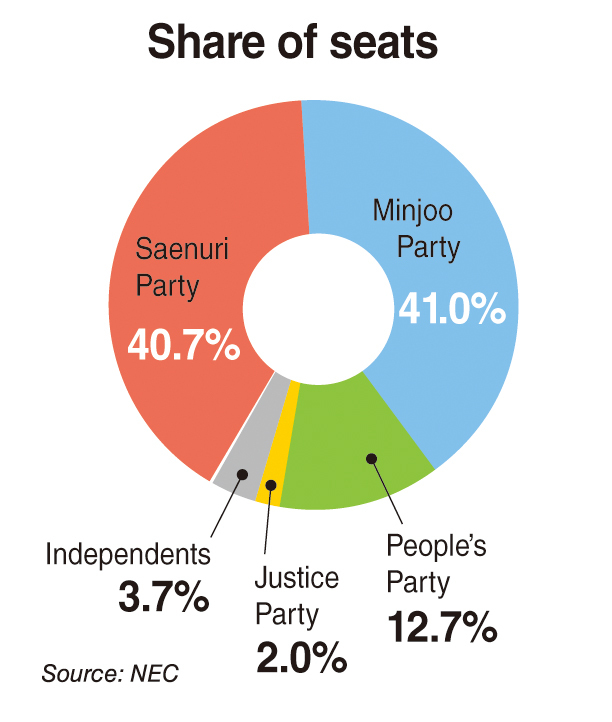 The 20th parliamentary race ended with the Minjoo Party taking 123 seats, followed by the Saenuri with 122, the People’s Party’s with 38, and the Justice Party with six, in addition to 11 independents.

By constituencies, the Minjoo party acquired 110 out of 253 seats nationwide, followed by the Saenuri with 105 and the new opposition People’s Party with 25. The far-left minority Justice Party claimed two.

The opposition camp claimed a parliamentary majority for the first time in 16 years, posing tricky challenges to the Park Geun-hye administration and the ruling party in the remaining 22 months until the next presidential election.

Kim, who scored an easy victory in his Busan constituency, was seen to lose ground in the party and his potential presidential bid, following the election debacle.

Supreme Council member Kim Tae-ho also announced his resignation and he is expected to be followed by his colleagues, many of whom have lost in their current constituencies against opposition rivals.

Another Supreme Council member Rep. Suh Chung-won, a close confidante to President Park, won his eighth term and became the top senior in the upcoming parliament. He did not show up at the party meeting.

The party immediately summoned a top officials’ meeting in the afternoon to discuss the establishment of an emergency committee to take over the missing leadership. The interim leadership will face multiple whammies, including an extensive reshuffle, power struggles and blame games among factions.

Cheong Wa Dae, having failed to create political synergy through Saenuri’s victory, is highly likely to carry out a large-scale reshuffle of its own so as to gain momentum during the last two years of the current Park Geun-hye administration.

“We hope that the 20th National Assembly will care about people’s livelihood and work for the sake of the people,” said presidential spokesperson Jeong Yeon-guk, without commenting further on the election results

The main opposition party may seem to be better off but is now officially challenged by the third-largest People’s Party, which took away most of their longtime stronghold in the Gwangju-Jeolla area.

It was in the Seoul-Gyeonggi belt, which comprises almost half of the nation’s constituencies and the largest number of swing voters, that the opposition swept a majority, even in districts considered to be unwavering strongholds of the conservative.

“The greatest significance of this election is the breakdown of the Saenuri’s parliamentary majority,” Kim said in a press conference Thursday.

“The people have made their stern judgment on the economic errors of the Park Geun-hye government and of the ruling party.”

But he did acknowledge the party’s obvious defeat in the Gwangju-Jeolla area, called the Honam region.

“It would be shameless of us to ask for support after disappointing (Honam voters),” Kim said.

“We fully embrace Honam’s public sentiment which scolded us for our faults.”

The rising star People’s Party, meanwhile, rejoiced in their newfound status as the third-largest parliamentary bloc with strong casting vote power.
Despite the skepticism that had prevailed over its identity, the party managed to secure 38 seats, over the 20-seat minimum required to constitute a parliamentary bargaining body and even exceeding its hopeful target of 35.

Having successfully come between the two leading parties, neither of which grasps a decision-making majority, the People’s Party will hold the tie-breaking vote in the upcoming legislature.

Key decisions including the passage of pending economic and labor reform bills as well as the selection of the next Assembly speaker through votes will also depend on the decision of the No. 3 party.

The challenge for this novice party, however, is its relatively weak positioning in terms of policies.

Despite its slogan to act conservatively on national security issues and progressively on economic issues, the party has so far failed to mark its presence, other than in its regional Honam identity.

Observers, nevertheless, point out that it is this dovish centrist stance that attracted a large number of undecided voters who shunned the increasing bipolarization between the leading parties.