“It was a bit awkward at first,” he said, since it was the first time he was not called by his name at work.

Hierarchy has been a key aspect of corporate governance worldwide. But it means more when it comes to the Korean corporate culture notorious for its top-down approach and rigidity.

Society that ranks everything

When exchanging business cards, Koreans give particular attention to titles, as it reflects the person’s job type, rank, experience and social status. Inside the effective palm-sized card lies Koreans’ deep-seated awareness of acknowledging one another’s social cachet. It is also a surefire way of figuring out what level of person someone is dealing with.

Experts say Koreans generally prefer to deal only with someone of equal rank.

“Inside a company, rank is the basis of what honorific title one is called by,” he added.
In Korea, employees typically address one another by the person’s job title, mostly following his or her last name. It even usually applies to talking with coworkers of the same rank, regardless of whether the communication is in writing or face-to-face.

To break the long-standing shackles of such rigid corporate hierarchy, chaebol groups here have recently decided to eschew the use of job titles.

In the same vein, Samsung Electronics is set to reshuffle job positions by streamlining five job titles into four for higher work efficiency.

A thirtysomething employee who works at a Samsung affiliate said she was “confused at first.”

“But since we keep the same job titles (as before) for those above team leader, dropping the use of job titles is only applied to those who sit in the lower half,” she said. 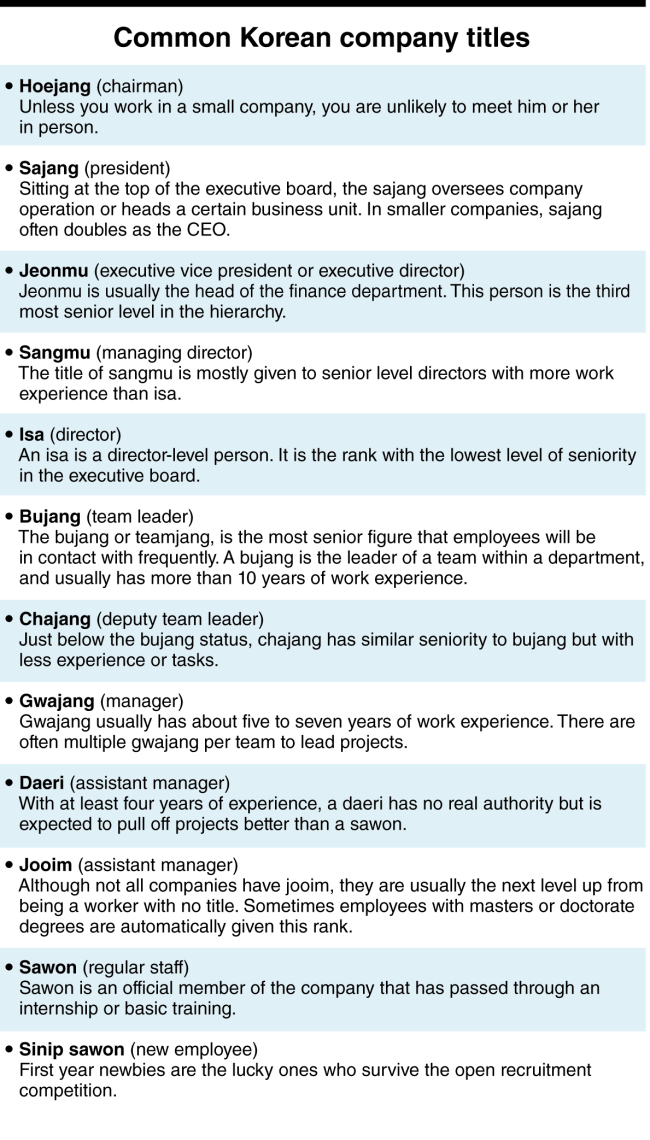 Titles convey one’s position in their professional career and many Koreans regard it as another name tag. But there is a powerful signaling value in job titles, as it is also closely connected to salary.

Korean companies began switching from a step-based salary system to annual salary system in the late 1990s, but the transition has yet to be fully implemented.

While in theory every employee’s salary fluctuates based on performance, pay is generally categorized by the years an employee has worked for the company, except in certain cases in which one has moved up the ladder or is recruited from outside.

The salary compartmentalization by job title is stricter among officials working for public entities. According to relevant regulations overseen by the Personnel Management Ministry, public officials’ salaries are fixed based on the salary table that is decided upon the approval of the minister at the Ministry of the Interior.

For Cho, an employee who worked four years on a public company’s human resources team, eradicating titles and streamlining positions is nonsense.

There are currently a total of 11 job titles in his company.

“(The reason we are adding more job titles) is because of the single salary table we use here. Public officials (who I work with) are gridlocked with frozen pay, without any salary negotiation or incentive. All we can get (as compensation) is a promotion or so-called ‘job title inflation,’” he said.

Most Korean companies are still run top-down, because promotions are based on the amount of time served rather than performance. Hence, job titles can even show approximately how long a person has been at a workplace.

But it can be quite the opposite in other countries.

Jillian Smith, 31, who joined a local marketing company in San Francisco in 2009, is currently a supervisor at her workplace. She is the second most senior person in her team.

She was promoted last year, six years after she joined the company as an intern.

“To be honest, I wanted to fully understand the work I’m responsible for at my workplace. I can ask to be given a role that can expand my profession in my career,” she said.

According to Jill, promotions in her company are only received among those who apply.

Her boss, Sarah, a senior manager on her team, was promoted a year earlier than her, though they both started at the company in the same year. But Jill said it was not something she took offense to.

“If you worked hard and people recognize it, then you deserve a chance to get promoted, no matter how long you have served,” she said.

In Japan, where occupation and job titles are also regarded as important to social status, only those who make it through the manager’s exam will get promoted.

“Many managers in the old Japanese company system do not work with responsibilities, since they just pass the exam to get promoted,” said an anonymous blogger on an online community in Japan.

There have already been unsuccessful cases of dropping the use of job titles in the past.

In 2012, local conglomerate Hanwha launched a campaign to standardize job titles from new graduate employees to senior managers. But within a three-year-period, the group decided to revive the use of job titles, citing confusion among employees and lack of motivation for promotion as the reason.

“Projects and tasks are always, and still will be, led by experienced veteran employees, normally who are a lot older than me. Getting rid of superficial titles cannot really bring a big change to current work systems,” said a woman who works at the manufacturing firm’s HR team.

Experts agree that dropping the use of job titles is not always the right solution for companies.

“Strict rules and rigid work process may fuel some companies, while companies in such industries as art or entertainment will need creative opinions and freer ways of communication, without use of job titles,” said Gwak Geum-ju, a professor of psychology at Seoul National University.

“Some -- not all -- companies may run with high efficiency when they bridge the psychological gap between workers,” she added.

CJ group, a local food and entertainment empire, was the first South Korean company to start eradicating the use of job titles in 2000, using “nim” instead of specific job titles.

Now, slowly but steadily, more Koreans are eying the importance of a flatter company culture, as the need for an innovative and motivating work environment surges to replace the conventional scheme in a time of economic slump.

Lee Hye-min, who spent nearly five years working at STX, a local trading service firm, said she has learned that abolishing the use of job titles can definitely reshape company culture. Earlier this year, she quit and launched her own start-up company.

“While working at STX, I was more likely to shut my mouth and hide my opinion in front of those with higher titles,” said Lee.

“But as you know, start-ups are not run like big companies. We cannot communicate when stuck in a hierarchical system. That’s why I made my coworkers call me by my name instead of ‘daepyonim,’ or CEO.”

“More conglomerates will focus on communication as a key factor in company culture like it is in the West. But adopting a more feasible work system so that individual workers can concentrate is more practical for Koreans for now,” said Choi Seung-jun of Hyundai Research Institute.

Interviewees that appear in the article declined to be named or did not wish to use their real names. --Ed.