According to Chaebul.com, a website dedicated to investigating the wealth of Korea’s superrich, Suh’s shares ― 49.34 percent of AmorePacific Group ― were estimated at 8.1 trillion won ($8 billion). The amount is 39 percent up from 5.8 trillion won estimated in end-2014.

Suh is just 362 billion won short of the frontrunner, Samsung Electronics vice chairman Lee Jay-yong. But he has a lead of 2.7 trillion over Hyundai Motor chairman Chung Mong-koo, who sits in third. 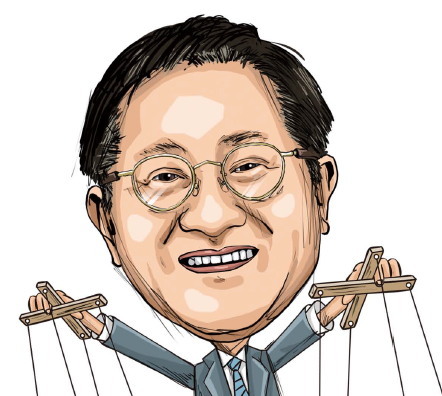 Suh’s wealth is expected to grow in the near future as AmorePacific shareholders, on March 20, decided on a 10-1 stock split to boost the number of shares in circulation.

“AmorePacific shares are known as the most expensive in the market ― around 3.15 million won a share. By splitting the stocks, people will be able to buy the shares for one-tenth of the price and smaller investors will be able to join the trade. This is obviously a smart move for the company that has a lot to do in the future,” said Lee Dal-mi, an analyst at the IM Investments and Securities.

“Who knows? Those 300,000 won-shares could grow into 3 million won and Suh could become 10-times richer,” another analyst said.

The biggest contributor to Suh’s snowballing wealth is the growing profit in the Chinese market. AmorePacific, which first advanced into China in 1992, has clocked 30-40 percent growth every year and is expected to generate 450 billion won in sales this year. The company aims to bring up the figure to 3 trillion won by 2020.

The growing number of Chinese tourists to Korea, buying around 800 billion won-worth AmorePacific products at duty-free stores is another good sign.

“The important fact is that AmorePacific’s market share is still about 1-2 percent despite its continuous growth. In other words, there’s plenty of room to expand. Imagine if you could rule that market,” Ahn Ji-young, analyst at the IBK Securities, said in an interview.

But it took more than the “China boom” for the company to leap onto the global stage with a reach in more than 10 countries. Company insiders attribute it to Suh’s leadership.

AmorePacific, established in 1945 as a face cream and pomade maker, was suffering from the aftermath of aggressive business diversification by the time Suh took the helm of the company in 1997. He had to remove the company’s baseball team, life insurance and fashion arms to focus on cosmetics manufacturing.

Instead, he called for globalization. Suh suggested that the company would become a Great Global Beauty Company, and generate 12 trillion won in annual sales by 2020, with half of it from overseas.

In 1992, the company advanced into the Chinese market, in Shenyang. “The reason Suh chose the relatively-unknown Shenyang was because he wanted to know everything from scratch,” a company insider said. Suh has reportedly visited China more than 120 times and had been a hands-on boss there. AmorePacific now has six focus regions in China and established a comprehensive research and development, logistics, and manufacturing facilities in Shanghai in October 2014.

The company also has more than 4,221 stores in China, Hong Kong, the U.S., Singapore, Taiwan, Thailand, Malaysia, Indonesia, Vietnam, the Philippines and more. In China, the skincare segment is popular, and in the U.S., the company is pushing the top-tier brand Amore Pacific and Sulwhasoo, while in France it is focusing on perfumes including Lolita Lempicka and Annick Goutal.

“We are expanding and diversifying our portfolio and retail channels,” a company official said.

During the expansion, Suh has adopted the rather horizontal communication culture to keep up with the global trend. He has removed all job titles inside the company, and is often referred to as Suh Kyung-bae “nim,” which conveys respect without reference to a formal title.

“On every first working day of the month, he gathers the workers to a large conference room and shares his vision and experiences. This rather casual atmosphere and close proximity to the leader motivates young workers,” the official added.

Despite such tangible outcomes, the company has been vigorously seeking to expand its presence through launching new brands as well as mergers and acquisition.

In order to penetrate Europe, it has acquired luxury perfume brand Annick Goutal. The company has also launched makeup removal apparatus brand Make On and is planning some more.

“AmorePacific allocates 3 percent of its annual sales to research and development. The figure may not seem impressive but it is equivalent to global powerhouses such as L’Oreal and others,” Kim Seung-hwan, a high-ranking official at the company, was quoted as telling the Hankook Ilbo newspaper.

Suh, born in 1963, is still quite young. But it seems that he is already planning his succession.

Married to the daughter of Nongshim chairman Shin Choon-ho, Suh has two daughters. Among them, his eldest, Min-jeong has emerged as the heiress-apparent to the beauty empire. She has reportedly inherited Suh’s shares of Innisfree and Etude House brands, which makes Min-jeong 18.8 percent-owner of Innisfree and 19.52 percent of Etude House. Having also inherited some shares of Nongshim, she has risen as one of the 20-something stock superrich here.

Though the 23-year-old is still a Cornell University student, market watchers have been gossiping about her future participation because she is known to be interested in her father’s business. Suh has dismissed the forecast.

“She might want to take a different path from her father,” he told the press in October.