Parties gear up for rematch in July by-elections

So far, it has been confirmed that 14 seats ― left vacant by lawmakers who ran in the local elections and those who lost their seats for violating elections laws ― will be contested. In addition, two more seats may become available pending Supreme Court rulings.

At present, the ruling Saenuri Party holds 149 of the 300 parliamentary seats, while the main opposition New Politics Alliance for Democracy holds 127.

In addition the Saenuri Party’s share of the parliament is to be taken down another notch following the expulsion of Rep. Yoo Seung-woo. On Thursday, the ruling party decided to eject Yoo over allegations that his wife received a large bribe during the run-up to the June 4 local elections. 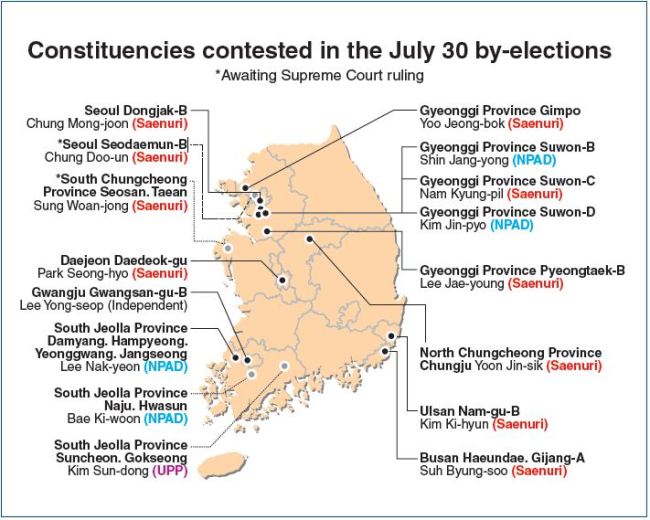 The by-elections will be far more than an opportunity to expand their presence in the parliament. Despite the parties’ hopes, neither emerged from the June 4 local elections as the clear victor. The NPAD and the Saenuri Party respectively took eight and nine of the 17 metropolitan mayoral and gubernatorial races. Although the Saenuri Party took more of the posts in smaller local administrations and assemblies, the progressives dominated the education superintendent elections.

As such, the upcoming by-elections are considered to be a rematch for the rival parties.

Although the elections remain almost two months away, heavyweights from both sides are already stirring.

Seoul’s Dongjak-B constituency, left vacant when the Saenuri Party’s Chung Mong-joon ran for Seoul mayor, in particular is drawing some of the biggest names in local politics.

From the main opposition, former presidential candidate Chung Dong-young and former South Gyeongsang Province Gov. Kim Du-kwan have been linked to the region.

Experts, however, say that neither party have a clear advantage.

“In light of how the recent local election turned out, I would expect a similar outcome since not much has changed,” said Hannes Mosler, an assistant professor who teaches Korean politics at the Free University of Berlin’s Graduate School of East Asian Studies.

“Also the local election’s outcome itself did not have any fundamental impact that could affect the by-elections. The result will heavily depend on which big shots will be nominated and on her or his personal abilities to influence the discourse.”

“The candidates have not been selected. Available analyses are based on the local elections, but the actual results will be very different,” Heo said. He added that as it was unclear exactly who will be running, making predictions at present would be very difficult.

Though the outcome of the elections may remain unclear, the two main parties appear likely to employ the same strategies as they did in the local elections.

In appealing to the voters, the Saenuri Party emphasized its connection to President Park Geun-hye and the support its candidate can provide in achieving her goals of national reform.

The NPAD, in contrast, highlighted the failure of the government, and by association the Saenuri Party, to respond properly with the April 16 ferry disaster that left more than 300 people missing or dead.

“Considering that the aftereffects of the Sewol tragedy will continue, the Saenuri Party is likely to carry the strategy of protecting the president and supporting her national reform,” politics professor Cho Sung-dae of Hanshin University said Wednesday at a conference sponsored by an NPAD lawmaker.

Meanwhile, Mosler predicts that the NPAD will maintain its focus on the government’s mishandling of the ferry tragedy. He warned, however, that unless the main opposition provides viable alternatives to the ruling party’s policies, it will fail to win over the voters.