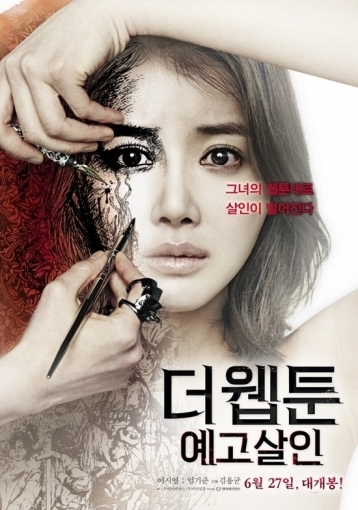 A growing number of Korean films are borrowing storylines from webtoons -- and “Killer Toon” is bringing the simple webtoon-based movie genre to a new level.

The film, directed by Kim Yong-geun, takes a webtoon itself as the key motif.
In the movie, Jiyoon, a horror webtoon artist played by Lee Si-young, submits her manuscript to an editor, barely meeting the deadline. What‘s scary is that Jiyoon’s episodes involve the editor‘s private. Then, a murder takes place.

“The tension of the closely knitted storyline will even lure those who do not enjoy watching horror movies at all,” said director Kim Yong-geun, during its first premiere on June 17. “We also adapted high-end techniques to render the scenes into the closest imitation of the cartoon drawings.”

”Killer Toon“ is scheduled to hit local theaters on June 27.