Though it received little notice, Ahn Cheol-soo, software mogul-turned-professor and strong potential presidential contender, made a rare revelation of his thoughts on North Korea’s future shortly after Kim Jong-il’s death.

Kim Keun-shik, a politics professor at Kyungnam University, was quoted by a local daily as saying he was “impressed by (Ahn) expressing concerns over China’s growing control over North Korea” when they met a week after Pyongyang announced the death of its longtime ruler on Dec. 19.

Ahn’s worries appear to reflect the anxiety shared by many North Korea watchers here that Pyongyang could depend too much on Beijing both politically and economically while struggling to ensure the survival of its failing regime.

They are concerned that the North’s lopsided economic reliance on its giant critical ally would further weaken or neutralize Seoul’s only effective leverage over inter-Korean relations.

Even raising the possibility of North Korea virtually becoming a “fourth province in northeastern China,” an area that encompasses Heilongjiang, Jilin and Liaoning provinces, a growing number of experts question the wisdom of the South continuing to freeze economic cooperation with the North in the post-Kim Jong-il era.

“It cannot be ruled out that the North Korean economy will be subordinate to China’s on a permanent basis,” said Hong Ihk-pyo, senior research fellow at the Korea Institute for International Economic Policy, a think tank based in Seoul. He added that President Lee Myung-bak’s government, which has toughened its position on Pyongyang since 2008, should try to put the stalled inter-Korean economic projects back on track before the new administration takes over in February next year.

The Lee government suspended all exchanges of personnel and materials with the North in May 2010 after a multinational investigation blamed it for sinking a South Korean naval vessel two months earlier. While denying its involvement in the sinking, North Korea launched an artillery attack on a South Korean island months later near the border in the West Sea.

Seoul officials suspect the two military provocations, which claimed 50 lives, were connected to schemes to heap more military credentials on Kim Jong-un, the youngest son and successor of the deceased North Korean dictator.

In his New Year speech, Lee suggested decoupling Pyongyang’s apology for the provocative acts from moving forward with inter-Korean relations. He said if North Korea “comes out with a sincere attitude,” the two Koreas would be able to open a new era on the peninsula together, making no mention of the 2010 provocations.

He further said the South is ready to offer support to revive the North’s moribund economy through the framework of the six-party talks also involving the U.S., China, Japan and Russia, which he said could resume as soon as Pyongyang suspended its nuclear activities.

Unification Minister Yoo Woo-ik also said Seoul will wait and see for possible changes in Pyongyang’s attitude in step with stances taken by other regional powers, which have agreed on the need to give the new North Korean leadership enough time to settle internally.

North Korea, however, has so far shown no intent to hold talks with Lee’s conservative government.

An editorial jointly run in the Jan. 1 issues of Pyongyang’s party and military media organs claimed the South Korean ruling forces have become “the subject of grave judgment from the people.” In a statement issued by the powerful National Defense Commission on Dec. 30, North Korea said it would never deal with the Lee administration, denouncing it for barring South Koreans from visiting Pyongyang to mourn its leader’s death.

Such a stance appears to reflect Pyongyang’s calculation that it could draw more concessions from the next government in Seoul, which it hopes would be more conciliatory.

Some experts, however, note there is still the possibility of Pyongyang moving to cut a deal with Lee, who may want to bolster his lame-duck status by making a breakthrough in inter-Korean ties that have been frozen for years under his presidency.

Various speculations have been raised over the future course to be taken by North Korea’s inexperienced young leader and his mentors’ group.

The best case will be that Kim Jong-un proves to be a reformer who opens up his country while the worst scenario assumes that he will seek to consolidate power by accelerating his nuclear program and making provocations against the South. In the past weeks since he took power following his father’s death, the 20-somethng North Korean leader has disassociated himself with economic affairs, paying several visits to military units.

The view shared by more experts here is that the new North Korean leadership will step up efforts to revive the economy, though it has yet to be seen how far they will push ahead in that direction.

“Though falling short of economic liberalization and reforms we hope for, the North will move to expand openness within a limited scope,” said Hong.

Cho Bong-hyun, research fellow at the IBK Economic Research Institute also said North Korea is certain to move, though in a gradual manner, toward economic reform and openness.

He said the North’s strategy is expected to focus on developing previously created free trade and economic zones on the borders that have languished for the past years.

Experts note Kim Jong-il had set the course for North Korea’s economy in his life through his visits to China and Russia made in the last years before his death on Dec. 17. The deceased leader seemed to have felt the need to boost his country’s moribund economy especially because he had earlier declared 2012 as the year to “open the door toward a strong and prosperous nation.”

North Korea’s dire state is in stark contrast to the prospering economy of its southern neighbor. According to figures from the Bank of Korea, the gross domestic product of North Korea remained at $26.5 billion in 2010, nearly one-fortieth of South Korea’s, with its population of 24.1 million being about half the size of the South’s.

The North Korean economy contracted for two consecutive years in 2009 and 2010, when it recorded growth rates of minus 0.9 percent and minus 0.5 percent, respectively.

A top North Korean official made remarks suggesting economic changes during an interview with the Associated Press in Pyongyang on Jan. 16.

Yang Hyong-sop, vice president of the Presidium of the Supreme People’s Assembly and a member of the Politburo of the Communist Party’s Central Committee, said the new leader was focused on a “knowledge-based” economy and looking at economic reforms enacted by other nations including China.

With South Korea and its allies having frozen trade and aid to North Korea in connection with its nuclear ambitions and other provocative acts, the North has increasingly relied on China for assistance to keep its moribund economy afloat.

Some experts here express concerns China will hold a monopolistic grip on the North’s economy if inter-Korean economic projects continue to remain stalled for the coming years.

“It was fully expected that China would fill the vacuum left by the freezing of inter-Korean economic ties,” said Kim Jung-tae, an advisor to an association of South Korean businessmen involved in businesses with the North.

“China has expanded its economic interests including rights to developing mineral resources in North Korea at relatively low costs,” said Kim, who has not visited a textile factory run by his company in the North for nearly three years under Seoul’s measures to restrict inter-Korean exchanges.

The trade volume between China and North Korea jumped from $1.97 billion in 2007 to $5.62 billion in 2011 with the North suffering a deficit of about $700 million, according to figures compiled by the Korea Trade-Investment Promotion Agency. In contrast, the volume of South-North commerce showed a slight decrease from $1.79 billion to $1.71 billion over the cited period, with the North recording a surplus of about $114 million. 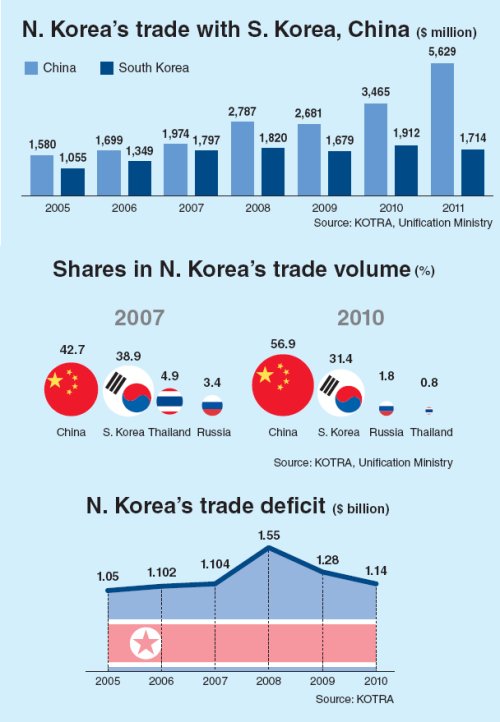 Excluding inter-Korean commerce, China accounted for a whopping 83 percent of North Korea’s external trade in 2010, up from 67.1 percent in 2007. China’s investment in the North rose from a mere $1.1 million in 2003 to $41 million, or 94.1 percent of the total foreign investment, in 2008 before decreasing to $12.1 million in 2010, according to figures from the Chinese Commerce Ministry.

Experts here are concerned that the North Korean economy will be further absorbed into the circle of China’s economic influence to the point of making it difficult for the South to expand its economic presence in the North after shifting its policy toward inter-Korean businesses.

“North Korea has imported most of machinery and other industrial equipment from China, which may lead to cementing the structure of its long-term economic dependence on China,” said Cho.

Observers say it goes too far to say North Korea will become a Chinese province, but China has been pushing the North toward reform and openness as part of a larger scheme to develop its three northeastern provinces, which lag behind the east coastal zones.

Some North Korea watchers say Kim Jong-il might have been pressed by Beijing to visit China four times in the last two years before his death.

China has been the main developer of the Raseon special economic zone, the combined towns of Rajin and Seonbong, in the northeastern coast of North Korea, which also provides it with access to an ice-free port for shipping abroad manufactured goods and other products from its northeastern provinces.

China also agreed with North Korea to jointly develop another special economic zone on the border islands across the Yalu River from the city of Dandong, its main gate into the North.

Jang Song-thaek, the uncle and key mentor of the young Kim, has been in charge of the economic projects with China.

The freezing of inter-Korean economic cooperation has done more damage to South Korean businesses with little effect in pressuring the North Korean regime to change its attitude, critics say.

According to data from the Korea International Trade Association, only a quarter of about 1,000 South Korean companies that have engaged in inter-Korean businesses are still in operation, most of whom are running factories in the Gaeseong industrial park in the North Korean border town, which remains the symbol of South-North economic cooperation.

Rep. Song Min-soon of the opposition Democratic United Party said in a recent forum that South Korean corporations housed in the Gaeseong complex suffered about 11 trillion won in cumulative losses since Seoul suspended exchanges with the North in May 2010.

Kim Jung-tae, the South Korean businessman, said North Korea may want to deal with the next South Korean government that will be installed in a year, but many South Korean companies will not be able to stand that period of time.

He urged the Lee government to resume previously launched inter-Korean projects and allow businessmen to visit their factories in the North, which will help foster the environment for further expanding economic cooperation between the two Koreas.

Kim said what is most important is to assure businessmen that their economic projects with the North will not be affected under different governments regardless of whether they are liberal or conservative.

“Sometimes, the government may have to be tough in handling North Korea but under any circumstance, private-level inter-Korean businesses should be kept intact, which will eventually help induce the North into a wider path of openness and reforms,” he said.