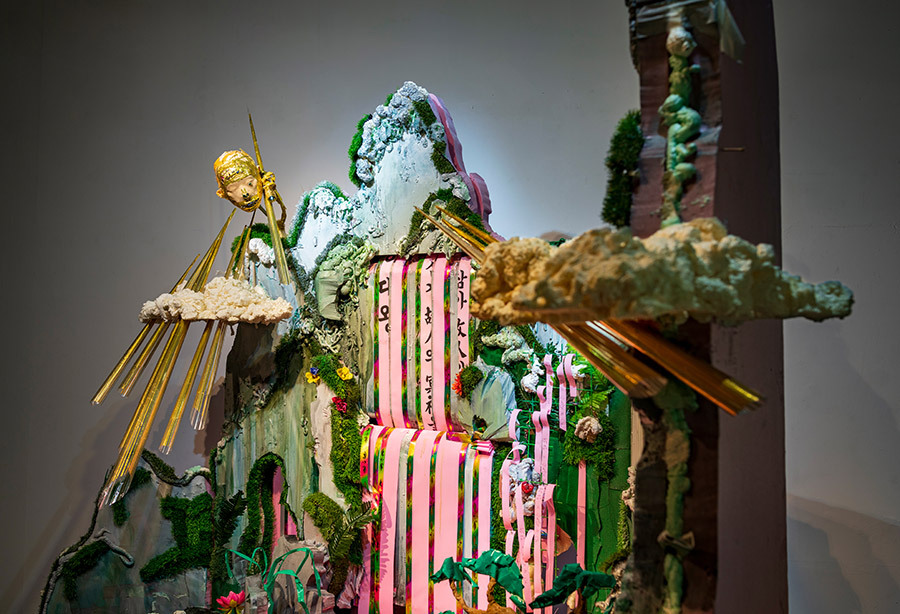 "I’m Not Dead!” by Ryu Sung-sil (Artist’s website)
Artist Ryu Sung-sil has been selected as the winner of the 19th Hermes Foundation Missulsang, the foundation announced Tuesday.

The young artist has explored a variety of art medium that reflect her critique of social issues in Korea as an artist.

Once every two years, the foundation selects a talented new Korean artist to promote in Korea and abroad. The awardee is given 20 million won ($17,800) in prize money and is given financial support to create new works for a solo exhibition at the nonprofit Atelier Hermes gallery in Seoul the fall of the following year.

"(The artist) presents a new approach to disrupt the existing dichotomy between art and non-art as well as reality and fiction through a kind of ‘one-person media show.’ She has built a world of art that implies both locality and universality by combining and reconstructing her family history, contemporary political-social issues in Korea, and traditional forms with her keen insight,” the jury said in a review.

After graduating from Seoul National University, where she majored in sculpture, in 2018 and earning a master’s degree in 2021 at the same university, Ryu has been exploring a variety of art from sculpture to multimedia art, including a 2-minute video work “Never Ending Family” and a 15-minute video work “Bigking Travel 2020.” Ryu’s artworks can be seen at the artist’s official website (sungsilryu.com)

Hermes Foundation Missulsang was launched in 2000 by Hermes Korea. The art award earned a prestigious position in the country by supporting many talented rising artists over the years, including Suh Do-ho in 2003, Koo Jeong-a in 2005 and Yangachi in 2010.

The 18th Hermes Foundation Missulsang went to Jun So-jung who made her name with narrative-focused works using various media, including photography, installations and video. Her solo exhibition at Atelier Hermes in Seoul took place last year.