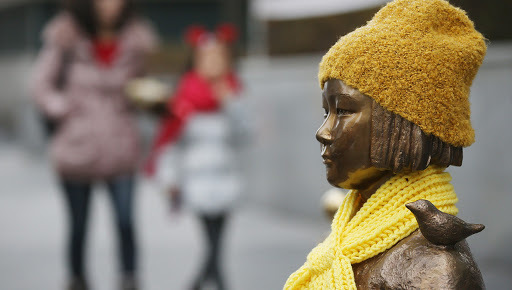 [1] A controversy surrounding a Harvard professor who wrote a journal article depicting victims of Japan’s wartime sexual slavery as voluntary prostitutes continues to escalate, with scholars, politicians and students demanding apologies and a retraction.

[2] In the paper, titled “Contracting for sex in the Pacific War” and published online in the International Review of Law and Economics, Mark Ramseyer, Mitsubishi professor of Japanese legal studies at Harvard Law School, argued that Korean “comfort women” -- as they are often euphemistically labeled -- were part of Japan’s licensed prostitution system.

[3] His arguments contradict the testimonies of survivors, who say they were either coerced or tricked into sex slavery, and the work of scholars who support their movement. Scholars estimate that between 170,000 and 200,000 women and girls were forced to work in Japan’s military brothels before and during World War II, and the UN acknowledges that this occurred.

[4] Ramseyer’s claim has brought about serious debate in academia, with two fellow Harvard history professors releasing a joint statement last Thursday refuting his paper as groundless and asking the journal to retract it.

[1] Insomnia is one of the most common sleep disorders. According to the National Health Insurance Service, some 640,000 people visited hospitals due to insomnia in 2019. The number of such visits has steadily increased over the past five years.

[2] There might be hope. A recent study has found that electroacupuncture can help people suffering from insomnia. Used often in Korean traditional medicine, electroacupuncture involves administering small electric currents using thin needles inserted into the skin at specific points on the body.

[4] Participants in the first and second groups were not allowed to receive any additional treatment for insomnia during the study period. But those in the third group could receive any treatments they wished except for Korean traditional remedies such as acupuncture and herbal medicine.