By 송상호
Published : Jan 6, 2016 - 18:19       Updated : Jan 6, 2016 - 18:53
North Korea successfully conducted a hydrogen bomb test Wednesday, the North’s official broadcaster claimed, saying it would continue to strengthen its nuclear deterrence so long as the U.S. keeps its “hostile policy” toward the communist state.

The North’s Korean Central Television said that Pyongyang carried out its fourth nuclear test at 10 a.m. local time, and “completely confirmed the accuracy” of its technology to build a “miniaturized” hydrogen bomb, and scientifically proved its power.
“The hydrogen bomb test is a self-defense step to exhaustively ensure the country’s autonomy, our nation’s right to life and the security of the region, in the face of threats and blackmail from hostile forces led by the U.S.,” the broadcaster said.

“Our attaining the hydrogen bomb is a legitimate, self-defense measure that we have taken as a sovereign nation as we confront the U.S. that has been on the lookout to invade us with massive nuclear weapons.”

The announcement came after the world’s seismic analysis centers reported an artificial earthquake, with the epicenter located close to Baekam County, Yangang Province, near the North’s northeastern nuclear test site of Punggye-ri. 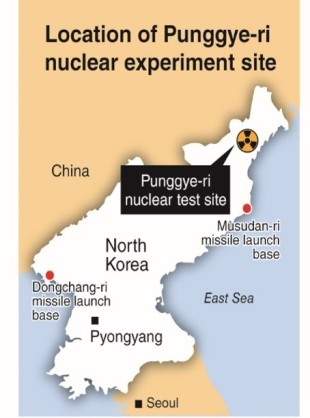 The seismic centers offered different magnitudes of the quake. The European Mediterranean Seismological Center announced a magnitude of 5.2 while the U.S. Geological Survey and the Chinese Earthquake Administration put it at 5.1 and 4.9, respectively. The Korea Meteorological Administration gave the lowest figure of 4.2.

The previous nuclear test in 2013 triggered an artificial earthquake with a magnitude of some 4.9, based on which Seoul officials raised the possibility that the North might not have tested a hydrogen bomb whose explosive power should have been much greater.
“Although the North claims that it is a hydrogen bomb, given the magnitude of the earthquake there is a possibility that it is not so,” a senior official of the National Intelligence Service said in his report to the National Assembly’s Intelligence Committee.

One kiloton is equivalent to 1,000 tons of TNT. In the North’s second nuclear test in 2009, the explosive power was recorded at between 2 kilotons and 6 kilotons, a reason why analysts called it a “half success.”

In its first nuclear test in 2006, the explosive power was about 1 kiloton. Due to its weak explosion, experts evaluated the test as a failure.

Seoul’s intelligence officials put more weight on the possibility that the North conducted a test on a boosted fission bomb -- called a 1.5-generation nuclear bomb -- the development of which is seen as a preliminary step toward developing a hydrogen bomb, dubbed a “second-generation bomb.”

Military officials, speaking on customary condition of anonymity, also said it was “difficult to deem” the latest test as a hydrogen bomb experiment considering the estimated explosive power. The ministry also shunned criticism of the military for having failed to detect signs of a nuclear test by saying they have been keeping close surveillance but the exact time of the explosion is near impossible to predict.

Though doubts remain, the latest test is expected to further upgrade the North’s nuclear capabilities. Experts believe its nuclear weapons technology has come a long way from the three previous nuclear tests.

Calling the nuclear test a “grave provocation” against the security of South Korea and world peace, President Park Geun-hye warned that the North would “pay the price” for the test.

“We should recognize the gravity of this situation and sternly deal with this through international sanctions or other measures,” she said as she presided over an emergency National Security Council session at Cheong Wa Dae.

Calling for a robust military readiness and close cooperation with the international community, she also expressed concerns that the alleged hydrogen bomb test could destabilize the regional security landscape and alter the nature of the North’s nuclear threats.

“First of all, it is important to accurately and promptly analyze the nature of this nuclear test,” she said. “And I direct you to make diplomatic efforts with major countries and the U.N. to sternly respond to it, with a united front.”

Seoul’s Foreign Ministry also immediately criticized Pyongyang’s nuclear test, calling it a clear violation of U.N. Security Council resolutions and a serious challenge to the security and peace of the international community.

The Ministry plans to contact major countries including the U.S., Japan and China to draw up joint measures over the provocation. It said that a U.N. Security Council session will be convened on Thursday (Korean time) to discuss the nuclear test.

The Defense Ministry raised its vigilance posture and began running an emergency response team as of noon. Earlier in the morning, Defense Minister Han Min-koo convened a crisis management session to check the national security situation.