At her dilapidated, one-bedroom home near a U.S. army base in Pyeongtaek, Gyeonggi Province, she was not very important either. The second of five children in a poor family, she had to do chores around the house and look after three younger siblings as her parents toiled day and night to barely feed them.
Then one day at school, Hwang, a sixth grader, accidentally stepped into classroom 1-3 (the third class of the first grade), and immediately felt that she belonged there. Covering one entire wall was a shelf full of books -- many of them old and worn with missing pages -- yet, they held the key to a whole new world of dreams, hopes and adventures.

Nearly four decades have passed and the girl who read her first non-textbook volume at the tiny school library is one of Korea’s most adored, respected and best-selling authors.

Her most successful book, “The Hen Who Dreamed She Could Fly,” released in 2000, has sold more than 2 million copies worldwide and has been translated into 27 languages. It has been made into a play, a puppet show, a family musical and an animated film that shattered local box office records when it opened in 2011. 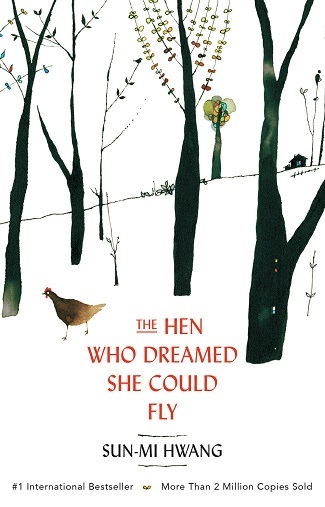 "The Hen Who Dreamed She Could Fly"

“Ever since I found that classroom of books, I never stopped reading. I read and read until I finished all the books there,” Hwang, now 52, recalled in an interview in Seoul. “Books for me were an escape from life’s many deficiencies.”

When this reporter met her in October, she had just gotten back from a two-month stay in the U.K. on the invitation of the British government, where “The Hen” was prominently displayed at bookstores.

Her second book to be translated to English, “Jangbal, the Hairy Blue Dog,” is awaiting publication in the country under the tentative title “The Dog Who Dreamed of Love.”

Fame, recognition or success -- none of these were what Hwang was after in life. To the contrary, she never thought she would be able to make a living by writing.

“Writing was just me. It was something that I have been doing ever since 11,” she said, revealing that from the days in classroom 1-3, she had already started writing her own stories.

Even now, she writes constantly and diligently. “I try to keep it to daytime only. You need to sleep at night.”

So far, Hwang has published over 50 books. This year saw the release of three new titles, which is just about average for the prolific author.

Her stories -- written poignantly, but simple and primarily for early teen readers -- are often a mediation on profound questions of life -- family, love, forgiveness, humanity and nature. That’s why her novellas, short enough to finish in one sitting, have captivated many parents as well.

“The Hen,” a modern fable concerning a plucky hen named Sprout, is a good example.

No longer content to lay eggs on command only to have them carted off to the market, Sprout gets a glimpse of her potential every morning through the barn doors, where other animals roam free, and comes up with a plan to escape into the wild -- and to hatch an egg of her own. On her journey, she stumbles upon an egg and hatches it, which turns out to be a duck, yet she becomes a loving mother. The story ends with Sprout losing her life to a weasel that had been waiting for the opportunity to kill her.

A tale of freedom, love, motherhood, sacrifice and even the acceptance of mortality, it has been described in foreign media as belonging on a bookshelf “somewhere between the innocent frivolity of ‘Charlotte’s Web’ and subliminal politics of ‘Animal Farm.’”

“Back when I wrote the story, people believed that a children’s book shouldn‘t have a tragic ending. But from the very start, I decided that this story would have to end with the death of the protagonist,” Hwang said.

“For me, death isn’t a sad ending. It is in continuation of a character’s growth -- the accomplishment of life after one’s wish has been realized.“

She added that her feelings toward her own father, who was terminally ill when she was writing “The Hen,” were channeled into the story and that Sprout was modeled after him.

In the afterword to “The Hen,” she recalls the arduous life of her father and her own impoverished childhood in a village called Gaeksari in Pyeongtaek and how memories from her years there keep coming back, inspiring her to write.

Scenes and snippets from her life at Gaeksari are immortalized in various works of Hwang, including “The House Where Wind Stays.”

“Bizarre trash it was ... Amongst flies, I discovered a pair of eyes -- eyes that are ashamed of self. Don’t look at me like that. Don’t stare at me that long,” she writes in “The House,” recalling the day she stumbled upon a baby who suffered severe burns all over its body dumped on a pile of rotten apples in an orchard.

In another passage in “The House,” she writes “Mom is like a bowstring that only tightens around me. ... Now, I am the same way. I am no longer stupid. The more tenaciously mom tightens around me, the more forcefully will I bounce away. Like now, when I am dashing out of my house to school, with my backpack slung around me.”

The day she found the classroom of books is immortalized in another book, “My First Key.”

In her own life, even after being “enchanted by the magical world of books,“ little changed. Her family lived in persistent poverty for many years that followed and she couldn’t attend middle school. She eventually managed to get herself into a high school and then a two-year college, but despite her big ego defiant of reality, she was still just an ordinary student from a poor family seemingly without noticeable talent.

After graduating from college, she married an old friend whom she had known from her Gaeksari years and became a mother to two sons. Even through those years, she never stopped writing.

In 1995, she debuted as a professional writer with a short story. Four years later, “Bad Boy Stickers,” inspired by a story from her own son, brought her fame as a children’s author. Then in 2000 came the sensational hit “The Hen.”

In retrospect, Hwang thinks perhaps her checkered childhood is why she became a children’s writer.

“Even after I left (Gaeksari), I was still there. I became an adult, but my words are an estimation of unfamiliar things based on my childhood years there.

“Perhaps I‘m not a grown adult, or one that doesn’t want to be grown up. Maybe that‘s why I chose children’s stories,” she writes in the afterword to “The Hen.”