By Korea Herald
Published : Nov 6, 2014 - 21:32       Updated : Nov 6, 2014 - 21:41
South Korea is facing a tricky decision over whether to consent to the U.S. deployment of an advanced missile defense system on the peninsula, with deepening diplomatic and political concerns overshadowing its security potential.

But the move has triggered strong resistance from opponents. They argue that the deployment would turn South Korea into the U.S.’ front-line missile defense base and cause diplomatic friction with China, forcing Seoul to bear the brunt of an intensifying Sino-U.S. rivalry.

A flurry of rumors about Washington’s intentions has put Seoul in an increasingly difficult position. Whipping up anti-American sentiment, some say the U.S. seeks to use the THAAD to defend its own security interests rather than strengthening Korea’s defense.

Experts called on Seoul not to waver, stressing that Seoul should prioritize its security interests based on the accurate analysis of North Korea’s escalating threats.

“The Seoul government should confidently respond to the controversy rather than wincing back for fear of public criticism. It should present its clear position about the THAAD and dispel the rumors,” said Park Hwee-rhak, political science professor at Kookmin University in Seoul.

Washington’s push for the THAAD deployment here leaves Seoul with a diplomatic dilemma, given that it has sought to enhance its strategic partnership with China ― its crucial partner for trade, tourism and efforts to denuclearize North Korea.

Aware that the relationship with China has deteriorated due to the previous government’s inordinate focus on the Korea-U.S. alliance, the Park Geun-hye administration has paid much foreign policy attention to restoring the ties with Beijing.

Seoul has yet to start any official consultation with Washington over the THAAD issue. But it maintains a positive stance on the system’s security role for the peninsula.

“While the assets that are available to cope with the North’s nuclear and missile threats are limited, the THAAD deployment would help ensure South Korea’s security and defense,” Seoul’s Defense Minister Han Min-koo said during a parliamentary audit last month.
In June, U.S. Forces Korea Commander Gen. Curtis Scaparrotti revealed that he had recommended the THAAD deployment here to the Pentagon. Since then, a torrent of speculations about the U.S. intentions and projections for the Korea-China relations have circulated.

Under the alliance treaty, the U.S. is required to secure consent from the South over the dispatch of new military equipment to its ally’s sovereign territory. With the public divided over the THAAD, Seoul has been agonizing over what decision it should make over the highly divisive issue.

Seoul recognizes the need to strengthen its missile defense as the North has been pushing to develop its missile and nuclear technologies. In December 2012, Pyongyang launched a long-range rocket, which experts presume has a range of some 10,000 km. After the third nuclear test last February, the North claimed that it succeeded in miniaturizing its nuclear warhead.

Before the apparent changes in the security landscape here, Seoul remained reluctant to bring in any U.S. missile defense assets due to strong objections, including some anti-American campaigners.

“South Korea has been reluctant to participate in the THAAD or other alternative TMD (theater missile defense) programs on the basis that a more serious threat stems from North Korea’s long-range artillery deployed along the Demilitarized Zone,” said Michael Raska, research fellow at the S. Rajaratnam School of International Studies, Nanyang Technological University.

“Seoul has for many years argued that South Korea’s mountainous terrain, the proximity of Seoul to the DMZ, and diplomatic concerns would make its participation in TMD/THAAD architectures imprudent.”

A slew of speculations about the U.S. intentions behind the THAAD deployment have made it difficult for Seoul to make considerations based wholly on its strategic security interests. Apparently for fear that it could be embroiled in more political wrangling, Seoul has so far kept a low profile over the issue, which critics say has even contributed to the spread of conspiracy theories behind the THAAD. 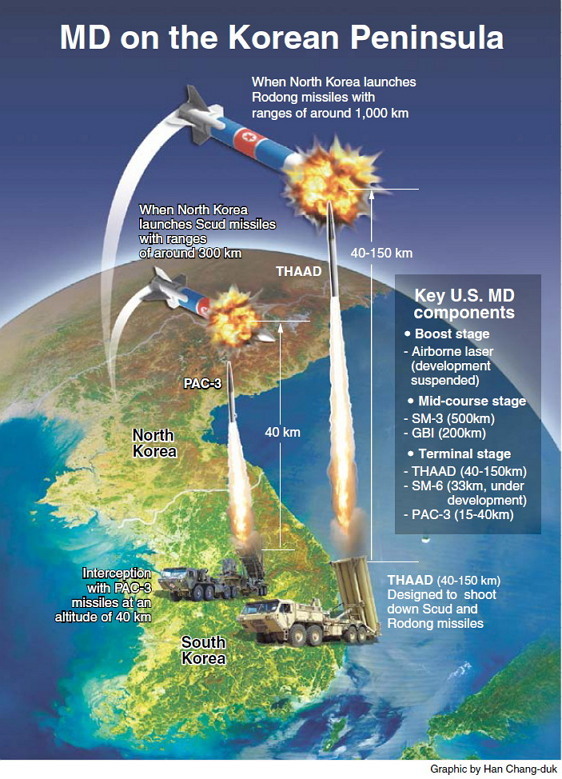 “The government should not leave an impression that it is holding something back from the public,” said Nam Chang-hee, a security expert at Inha University. “It should reach out to civil society and help them better understand what’s going on to garner their support in its efforts to improve national security.”

In efforts to fend off additional arguments over the U.S. missile defense system, Seoul has been pushing to establish its own Korean Air and Missile Defense system, a low-tier, multiple-interception program that destroys incoming missiles at altitudes of around 40 km.

Amid rising calls for a more enhanced missile shield, Seoul also plans to develop L-SAM surface-to-air missiles, which would shoot down hostile missiles at altitudes of above 40 km. This indicates that Seoul also recognizes the need to possess a missile defense system equivalent to the THAAD.

The THAAD is a defensive system to intercept incoming hostile missiles at altitudes of 40-150 km after detecting the missiles with land-based radar that has a maximum range of about 1,800 km.

Experts say the THAAD could not be used to hit China’s intercontinental ballistic missiles headed for the U.S. mainland as they would travel far above the altitudes that the THAAD could reach. On top of this, the THAAD is designed to intercept missiles falling toward the Earth in a so-called terminal phase, not missiles flying far beyond the peninsula.

Apart from the altitude, the operational range of the THAAD is also only 200 km ― too short to intercept Chinese or Russian missiles.

The experts also say that should it have to fire ICBMs at U.S. targets, China might fly the missiles over the Arctic, rather than over the Korean Peninsula and Pacific Ocean, given that the ranges of Chinese missiles ― placed in China’s central inland areas rather than in the vulnerable coastal regions ― were not yet long enough to reach the U.S. over the Pacific route.

Another major bone of contention is the coverage of the radar that is embedded with the THAAD system. The AN/TPY-2 radar can cover areas of China and Russia ― the reason why the two powers think that the radar could be used to glean intelligence about their militaries.

Some experts say that the radar could gather intelligence about Chinese military activities, but it is mainly designed to trace the trajectories of missiles. Nam of Inha University said that should the radar be deployed here, it should focus only on North Korean missile sites ― the pressing concern for the U.S. and South Korea.

“The purpose of the THAAD radar is to monitor North Korean missiles, not Chinese missiles. With this purpose in mind, the radar would be used solely for peninsular defense,” said Nam. “Chinese concerns may be somewhat exaggerated as the most urgent thing for the allies is to counter the North Korean threats until the threats are removed.”

Addressing the concerns over the radar, Park of Kookmin University noted that it was inappropriate to highlight only the capability of the THAAD radar when China and Russia are already under the scrutiny of a host of U.S. intelligence, surveillance and reconnaissance assets.

“China and Russia have also put the Korean Peninsula under scrutiny through various monitoring activities. Since when did South Korea start caring so much about their security concerns on their behalf?” he said.

Before talking about the deployment of the missile defense system, Seoul should think about the Chinese missiles that are capable of hitting targets in South Korea, some observers said.

“If China decided to launch missiles at the South, the THAAD could help shoot some of them down, and therefore help to deter China from taking such action,” said Bruce Bennett, a senior analyst at the RAND Corporation think tank.

“Of course, few people in either South Korea or the U.S. expect China to launch missiles at South Korea, but having the THAAD would hedge against that low-probability kind of threat.”

Bennett added, “Telling China that it cannot freely launch missiles at the South would not ‘keep China in check’ ― the THAAD would have a small contribution to overall security in the South relative to potential Chinese threats.”

The controversy over the THAAD escalated as the U.S. pushed for a rebalancing policy toward the Asia-Pacific under which it has sought to deepen military and diplomatic engagement in the region ― the emerging center of power and wealth. The policy has apparently been perceived by China as a systematic strategy to encircle China and ultimately counter its rise as a dominant power in the region.

Pointing to the plethora of disputes over the THAAD, some raised the question of why the U.S. should insist on bringing in the THAAD despite strong resistance from opponents in South Korea, China and Russia.

Kim Tae-hyung, a security expert at Soongsil University, said that the U.S. may want to link its core Asian allies of South Korea and Japan to strengthen the trilateral missile defense cooperation to keep China in check.

Rask noted that in addition to countering the North Korean threats, the U.S. is also eyeing China’s growing missile arsenal, particularly in the context of China’s “counterintervention” strategies designed in the long term to deny U.S. freedom of action in the region.

Professor Nam said the USFK might be seeking the deployment to better protect its personnel and bases in the South.