The Busan police last week apprehended a convicted offender who had cut off his electronic anklet and escaped the authorities’ surveillance.

The 27-year-old convict, surnamed Park, cut his anklet last Monday with a pair of scissors, left it in a public bathroom trash bin and fled from Busan but was caught Thursday near his girlfriend’s house in Daegu, said officials.

It was his second escape, having earlier broken free from the anklet in August shortly after he was released from prison. He had served a three-year jail term for raping a woman he met through online chatting.

Park attempted the escape to hide his criminal record from his girlfriend, officials said. 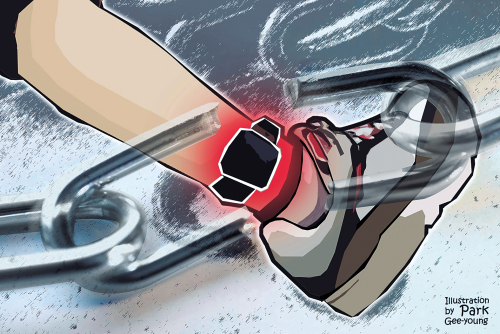 The Busan police also found on the same day another sex offender who loosened his anklet with a screwdriver.

The 29-year-old man, surnamed Kim, claimed that it was only because the anklet hurt his leg and that he made no attempts to dispose of the device. He was asleep in his house when the police officials arrived.

Kim was released last month after serving a 10-month sentence for harassing a woman last year and was put on a three-year anklet term.

On Saturday, a 38-year-old man surnamed Bae was caught on the scene for physically harassing a woman on a bus in Busan. With his past record of sexual harassment, the man was wearing an electronic anklet which did little to prevent the case or to ring alarm.

A law took effect in September 2008 to force sex offenders to wear a traceable electronic anklet.

The law faces further reinforcement in the near future based on measures following a recent series of high-profile rape cases, especially against minors.

The electronic device, however, has been largely criticized as insufficient in preventing sex offenders from committing a second offense because of its relatively fragile urethane material and the lack of supervising centers and manpower.

Based on the special law on the electronic anklet, only probation officers of the Justice Ministry may refer to the personal information and location of the anklet-wearing convicts.

Also, the ministerial control center is presently the only place where officials may trace the anklets on a 24-hour basis, making it even more difficult for the police to detect convicts who may damage or flee from their binding device.

Some 230 sex offenders nationwide are presently wearing the anklets, according to the ministry.

The ministry has recently vowed to submit a revision bill of the anklet law to the National Assembly so that the police may also have direct access to the convicts’ information.

Also, the present anklets are to be replaced by the end of the year with reinforced versions which include metal cores, said officials.