[Feature] How artists, writers inspire one another 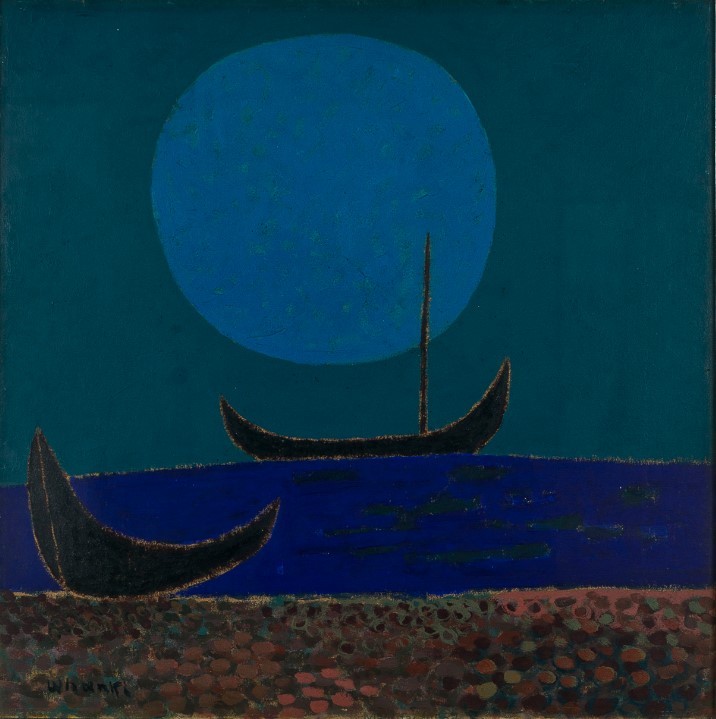 "Moonlit Night" by Kim Whank-ki (MMCA)
The 1930s and the 1940s were the golden age of Korean literature and art. The two genres flourished together, even as writers and artists faced the challenges of harsh Japanese colonial rule (1910-1945), which sought to suppress Korean culture.

The bleak years saw lively interaction among painters, novelists and poets who inspired each other. Some would gather at Jebi, a coffee shop in what was then Gyeongseong, now called Seoul, run by Yi Sang, the country’s representative modern writer. Among the regulars at Jebi were Yi’s beloved painter Gu Bon-ung and novelist Park Tae-won.

The exhibition “Encounters Between Korean Art and Literature in the Modern Age,” running at the Deoksugung venue of the National Museum of Modern and Contemporary Art, Korea, sheds light on how Korea’s modern culture flourished during the Japanese colonial era, centering on modern painters, novelists and poets.

It was a time when tradition and modern values clashed. The influx of new ideas, philosophies, knowledge and Western culture fascinated young Koreans, who were frustrated and challenged by Japanese colonial rule. 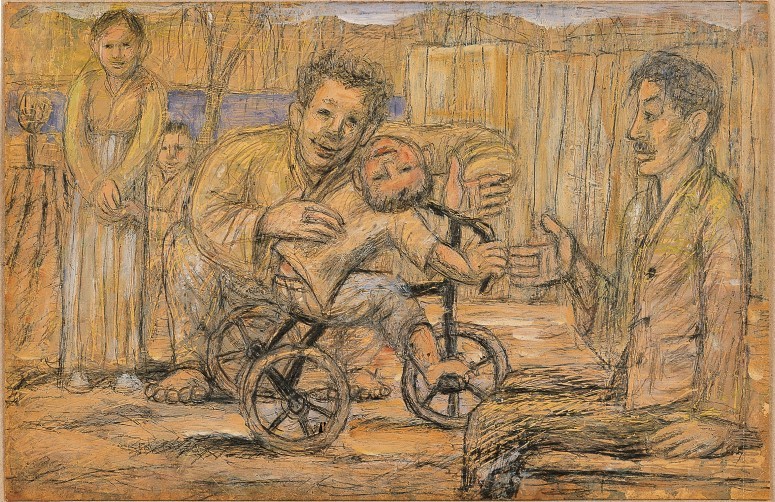 "Family of Poet Ku Sang" by Lee Jung-seop (MMCA)
“Family of Poet Ku Sang,” a painting by modern artist Lee Jung-seop, on display at the exhibition, depicts Ku and his son riding a bike that Ku had given his son as a present. On the right side of the painting is Lee, who sits lonely, gazing at the family as if he were longing for his own family. Kim and Ku were longtime friends and the painting was completed when he was staying at Ku’s house, having given up hope of meeting his family in Japan due to financial difficulties.

The exhibition, which runs through May 30 at MMCA Deoksugung, shows 140 artworks and 300 documents. One exhibition hall is dedicated to print media from the 1920s to the 1940s, when newspapers and magazines were vital media that brought writers and artists together. Here, an illustration by painter Jung Hyun-woong is on display, accompanying the famous poem “Natasha, the White Donkey and Me” by Baek Seok.

In these pandemic times such artistic exchanges and bonds seem more crucial than ever.

“The essential power of our culture stems from breaking through darkness. Such culture of the past sends a message to the culture sector that is experiencing difficulties due to the pandemic,” said Cho Young-bok, a professor of Northeast Asian cultural industries at Kwangwoon University.

The attempts to forge bonds among different artistic endeavors continues today. One recent example is Busan Biennale 2020, a major international art biennale in South Korea that explored how art and literature could collaborate to encourage creativity. The artists created artworks inspired by literature and the city of Busan.

An exhibition that opens Wednesday at Hakgojae Gallery in Seoul will feature collaboration between painter Yun Suk-nam and novelist Kim E-kyung. Titled “Women of Resistance, Becoming Historic -- Portraits of 14 Female Independence Activists Who Quaked History,” the show will display portraits of female independence activists during the Japanese colonial era whom historians have long neglected because of their gender.

“Kim and I have known for each other for many years and I offered to collaborate with her because there was scant information about the female activists who fought against the Japanese imperialist rule compared to male activists,” Yun told The Korea Herald. “I needed her inspiration and imagination as a novelist because the exhibition is based on storytelling.”

The two artists collected documents together and frequently visited each other’s studios, inspiring each other. Coinciding with the exhibition, Kim’s novel about the female independence activists will be published by Hanibook, according to the gallery.

“I did research and created storytelling as a novelist and we inspired each other through conversations. We did our own works first, then checked each other’s works. I had to add more stories after seeing Yun’s paintings,” said Kim. “It was a really interesting experience, and I would not have attempted this as an artist if not for Yun’s offer.”