From crystals to vivid patterns, sweet-toothed sculptor hopes donut designs that helped him overcome his limitations encourage those daunted by COVID-19

More than 1,700 ceramic donuts welcome visitors to the Hakgojae Gallery in Jongno, central Seoul, each with a different look.

“As long as people enjoy my donuts, I would say my works are a success,” artist Kim Jae-yong, who bills himself as a donut lover, told The Korea Herald.

“I really feel happy when I see smiles on people’s faces. That is it. I want to give happiness to people.”

“Donut Fear” is sculptor Kim’s first solo exhibition in Korea after earning international recognition through hosting 17 other solo exhibitions in the US, Japan, China and Hong Kong. Kim is also a professor of the department of ceramic art and design at Seoul National University of Science and Technology.

“I think life is being crazy about something,” Kim said looking around his clay donuts. “I always think of donuts wherever I go, whatever I see.”

When Kim came back to Korea five years ago from the US, he had two goals: make giant donut installments and make donut sculptures using “cheonghwa,” or traditional blue and white pigments.

As a result of his passion for donuts, Kim made five 3-meter donut installations last year and introduced a series of donuts adorned with “minhwa,” Korea’s folk painting style, using cheonghwa.

His madness for donuts stems back to 2008 when the US was hit by the global financial crisis, one of the most challenging times for him to carry on with his career as an artist. At first, he was thinking about starting a donut business for a change in career, but soon changed his mind to making donut art.

“I think I become stronger in difficulties, and that is one of my best strengths,” Kim said. “Donuts also implicate my suggestion to stare at our desires rather than being consumed by them.” 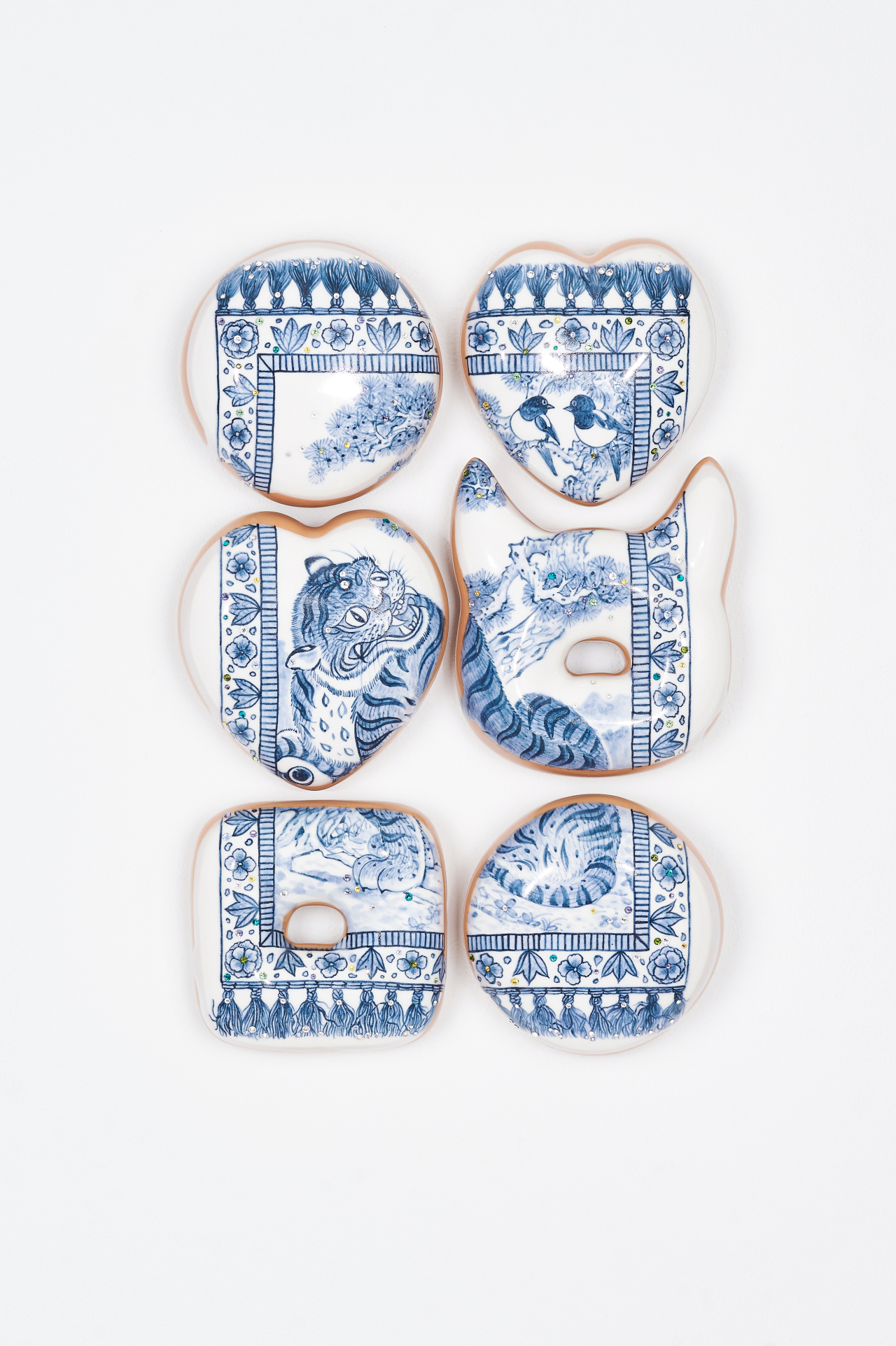 "Tiger and Magpie” by Kim Jae-yong (Hakgojae Gallery)
Donuts are also the result of Kim’s endless efforts to overcome his former weakness as an artist: color. The officially color-blind sculptor said he could overcome his fear of using colors after making the first 300 to 400 donuts with a variety of colors.

“To me, donuts are like diaries; each donut has a story,” Kim said.

Upon entering the exhibition, visitors encounter 63 clay donuts decorated with Swarovski crystals, under the pun and words of encouragement: “Donut Fear to Shine!”

“The COVID-19 pandemic was totally unexpected when we organized the exhibition, and I was worried about people not visiting the gallery due to the social distancing,” Kim said. “I, however, made up my mind and told myself ‘let’s get bold about the situation and try something daring.’”

“Donut Fear” runs until May 31 at Hakgojae Gallery.