Rival presidential hopefuls to face off in April general election

By Choi Si-young
Published : Feb 9, 2020 - 17:37       Updated : Jun 3, 2022 - 18:24
Home to the presidential office and Seoul Government Complex comprising key government offices, the Jongno District in central Seoul has been a symbolic seat in the political landscape. The election results there have proven to be a yardstick on where rival parties stand for the next president.

In the upcoming parliamentary elections in April, the district will once again serve as a key battlefield for liberals and conservatives, as Lee Nak-yon of the ruling Democratic Party of Korea and Chairman Hwang Kyo-ahn of the main opposition Liberty Korea Party will face off there.

From the way things look now, Lee, who was until January this year the country’s prime minister, appears to have an upper hand.

The four-term lawmaker with plenty of election experience is a clear favorite among potential presidential candidates, with a rating of around 30 percent, while Hwang is supported by 18 percent in the latest Realmeter survey released the previous week.

Lee has an even bigger lead over Hwang, polling at 53-26, according to a separate poll in their more immediate showdown in the Jongno constituency, conducted on a total of 500 residents there, Hwang’s supporters dispute the poll since it was done days before Hwang officially announced his run on Friday.

For the duo, more is at stake than just a parliamentary seat.

A win will likely convince their respective party members, as well as voters across the country, that they are their best chance at the 2022 presidential election. A defeat, on the contrary, will make their parties and voters question that.

Hwang said the elections were an opportunity to prevent President Moon Jae-in from steering the country in the wrong direction. He highlighted his concern when he announced his run in Jongno. “A win against the Moon administration. This isn’t a one-on-one match; this is a fight between me and the Moon government,” he said.

Not once did Hwang refer to Lee Nak-yon when addressing reporters’ questions after the announcement, in a clear attempt to portray himself as the front runner checking up on President Moon. Hwang doubled down on his attack against President Moon during his first street canvassing in Jongno on Sunday. 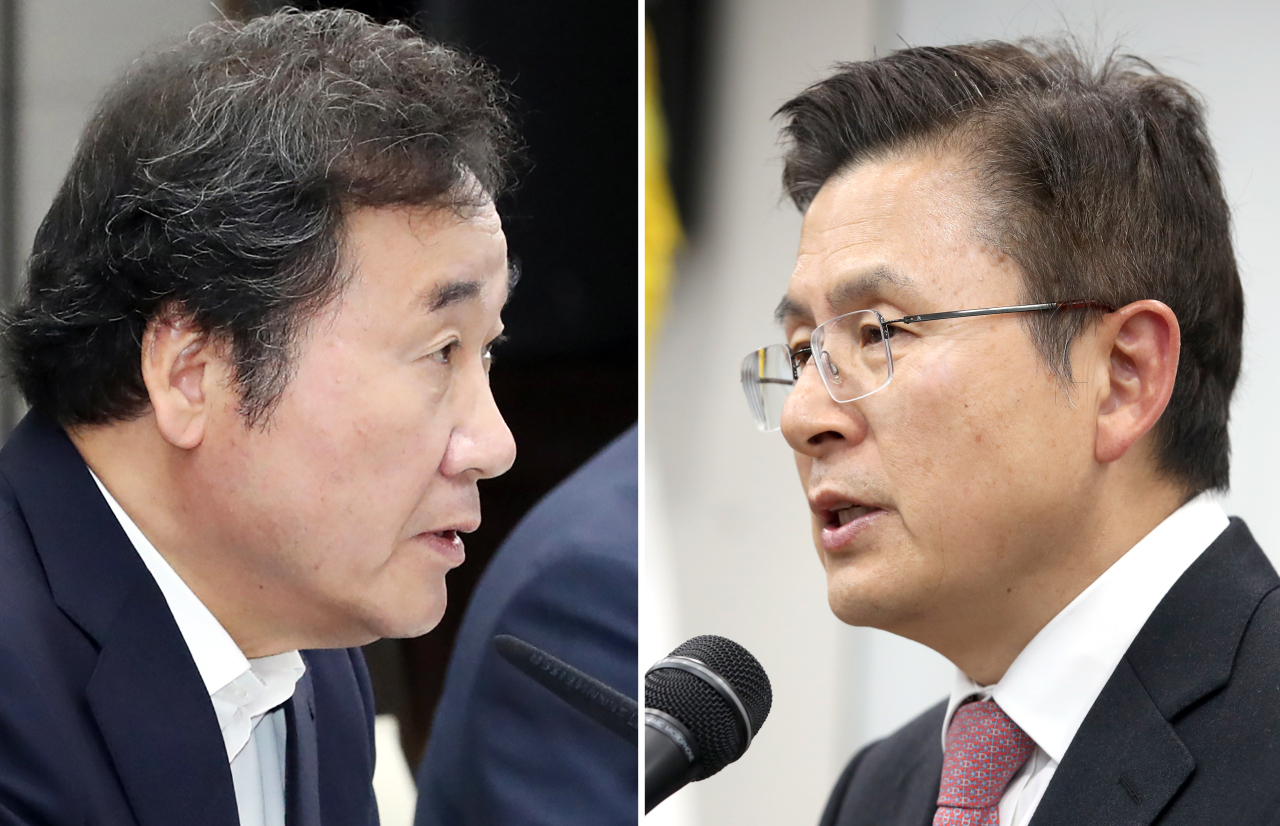 The same day, Lee, who declared his run two weeks before, also sought out to meet as many Jongno voters as possible. Lee declined to directly engage Hwang, who was trying to paint Lee as another Moon who cannot deliver change. Lee was the inaugural prime minister under President Moon.

“On the extent of what I’ve said earlier, that I’d expect an election in good faith, I think I'll refrain from saying more on what Hwang said about indicting the Moon government. Let’s talk policies,” Lee said, without elaborating.

Lee and Hwang share similar backgrounds. Both Lee and Hwang have served as prime minister -- Lee under the sitting President Moon and Hwang under former President Park Geun-hye. Hwang doubled as acting president between Park’s impeachment in December 2016 and the presidential election in May 2017.

But Hwang has never held elective office, whereas Lee served as a governor before becoming prime minister. Some experts argue Hwang’s inexperience is the reason he appears incapable of mustering political capital to push through the elections

“Lee clearly got a head start in this race. Hwang not only trails Lee but he lacks political capital for a last-minute turnaround,” said Rhee Jong-hoon, a political commentator. “Unless the Moon administration or his ruling party does something damaging, Hwang stands little chance.”