By Song Su-hyun
Published : Jan 13, 2020 - 16:13       Updated : Jan 14, 2020 - 10:32
LAS VEGAS -- Throngs of visitors from global cosmetics firms flocked to a suite on the 29th floor of the Venetian, where South Korean cosmetics behemoth Amorepacific privately offered them an opportunity to check out its latest skin care technologies during the Consumer Electronics Show last week.

Although the company didn’t set up an open exhibition booth to trumpet its prowess, its first participation in the world’s biggest tech show was deemed successful as its global competitors got a taste of its advanced know-how.

A majority of the visitors to the trial session were officials from global cosmetics firms like L’Oreal and Johnson & Johnson, who are interested in the adoption of cutting-edge IT technologies in the beauty industry. 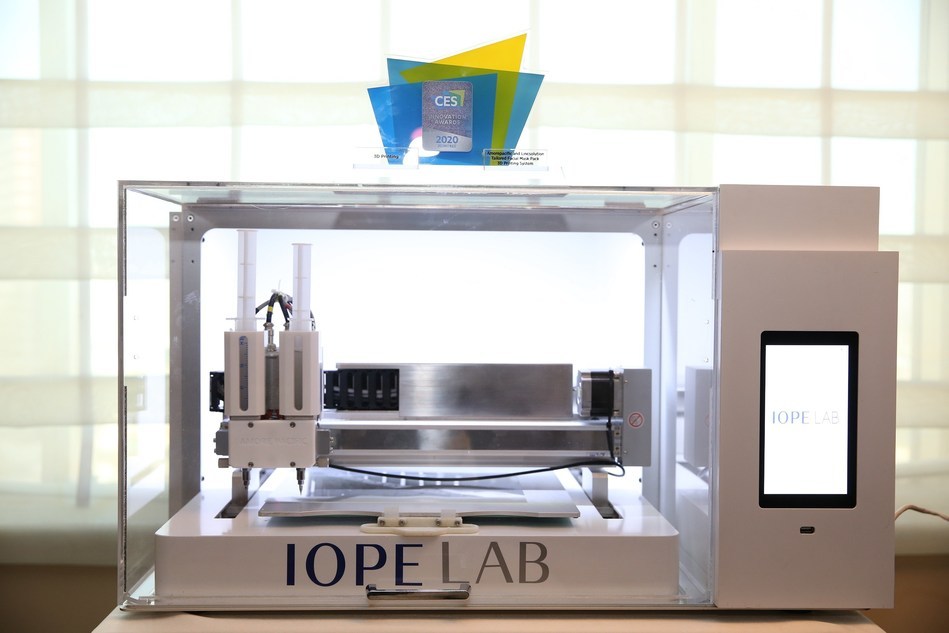 “In order to communicate with our customers and industry officials genuinely about technologies, we decided to offer these trial sessions privately in order to help them understand our technologies better by experiencing them in person,” said Park Won-seok, senior vice president at Amorepacific’s Innovation Division at its R&D Center.

By using the third-generation 3D printing system, Amorepacific plans to launch the tailored mask service at its flagship shop in Myeong-dong in central Seoul in April.

After the Korea launch, the service will be available in China this year.

Unveiled for the first time to the public, the MakeON Flexible LED Patch resembles a wireless earphone neckband.

The patch automatically recognizes users’ skin structures, providing adequate LED lights for different skins types. For example, for skin areas that are in need of minor elasticity, it gives red LED. For areas that need a tone-up, the patch offers yellow LED. To calm the skin, it gives green LED.

“The lightweight, flexible LED patch fits close to the skin, minimizing light dispersion and maximizing the skin care effect unlike existing LED facial mask products that have space between the skin and devices,” said Kim Ah-reum, research fellow at the company’s R&D center.